I'm starting to study the Keynesian theory, and I have just read that the increase of interest rate ($r$) will lower the price level ($P$). I tried to understand this using the IS-LM model (I mean, visually through the curves or through the equations), but I am stuck at this reasoning.

If I consider the LM curve and its idea, we will eventually see the following curve: 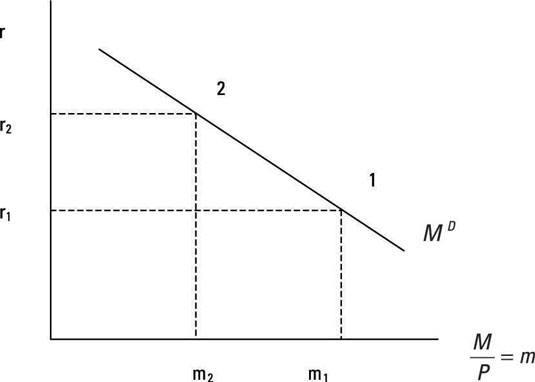 This represents the interest rate in the y-axis and real money in the x-axis. Now, if I want to know the effect of an increase in $r$ (from $r_1$ to $r_2$), I can say that the real money will be lower, and considering $M$ constant, this implies that $P$ increases. I am aware that this result is obviously not correct, how could I understand this change in $r$ in terms of the IS-LM curves correctly?

There are two different way to present the IS-LM model, one with a vertical money supply line, and one with a horizontal interest rate line. Consider the second one, as it represents better what central banks actually do nowadays.

If the r goes up, this means the central bank has increased its benchmark interest rate (it can mean a host of other things, but I am assuming your IS-LM model does not include risk premia and the like). The horizontal r line shifts upward. The point where this line intersects the money demand line implies that the real money supply is lower. This does not tell us much: it just tells us that the central bank, in order to achieve the higher interest rate it wants, has decreased the nominal money supply M, so that, given the money demand, the interest rate goes up. One could represent this equally well with a vertical line, as I mentioned, but that representation makes it seem as if the central bank targets a given level of money supply. It does not: it targets the interest rate.

Anyway, Patricio is right in saying that, to really track what happens to P, you need the AS-AD model. However, the basic mechanics can be understood intuitively in the IS-LM. The shift in money supply shifts the LM curve leftward, so Y decreases. We move upwards left along the IS curve, as the increased interest rate (endogenously) decreases I (the opportunity cost of investing is larger, so less people invest). The resulting decrease in demand lowers the price level (this is just basic S-D logic, no AS-AD needed). If the central bank wants to keep to its target interest rate, it further increases the M in response to the decrease in P, so as to keep M/P at the level conforming to its target interest rate.

There are some more dynamics in the AS-AD curves after this that have to do with wage rigidity and inflation expectations, but I will leave it at that, as I don't know if you've seen this already.

Not the answer you're looking for? Browse other questions tagged keynesian-economics or ask your own question.

3
Raising interest rates to prevent inflation
1
What will be the effect on velocity of money when demand for real money increases?
3
Would directing more money to science and research and development be an effective response to recessions?
0
Why Keynesians prefer short run measures despite straight long-run Phillips curve?