Basic question about why supply/demand should move to the equilibrium price?

This is probably an extremely basic question, however I'm still unclear about the answer. In a typical supply and demand curve graph, such as 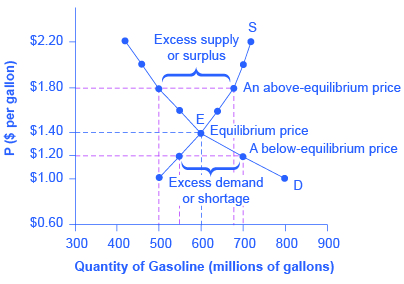 the equilibrium price is said to be

But why should this be so? In the above figure, at the \$1.80 price the demand is 500, netting the supplier a 500*\$1.8=\$900 revenue. Which is higher than the $1.4*600=\$840 revenue it would get at the equilibrium price. And even though at the \$1.80 price the supply exceeds demand, the supplier could just choose not to produce more than the 500 demanded at that price. Or if it does produce it, it could store it somewhere for the future, for example. As a rational agent, the supplier wants to maximize its revenue, so dropping their price to the equilibrium price would be counterproductive to that goal.

What you write is true in a monopoly situation, but not when there are multiple firms on the supply side.

However, when equilibrium is discussed in this context people usually mean competitive equilibrium, that is equilibrium in a market where many firms compete. So at price \$1.80 several suppliers want to sell an aggregate amount of about 680 gallons. However demand is only 500 gallons. This would prompt the suppliers who are worried about not being able to unload all their stock to offer it at a slightly lower price, say \$1.79, undercutting their rivals' price. The idea is that by lowering the price somewhat you can greatly increase your market share, and unload your stock, to the general dissatisfaction of your rivals, who are now stuck with their own surplus gasoline.

Thus \$1.80 is not an equilibrium price, as suppliers have incentives to unilaterally push their own prices down.

4
Subsidies Incidence on Producers and Consumers
7
Why don't consumers subsidize monopolies?
1
Market Equilibrium
5
Why does supply equal demand?
2
Effect on revenue of changing price of unitary demand elastic product
3
Is there really an "efficient equilibrium *price*" with externalities?
1
The law of supply and demand - How does it work?
1
Question about the Law of Supply