How purchasing power reduces when currency is commodity money(say gold)

First of all I am new to Economics. I'm a B.Sc.(Mathematics) final year student. I was curious to learn Economics so I started with "Economics in one lesson" by Henry Hazlitt.

In this book I encountered few phrases like 'inflation' and 'purchasing power'. On Wikipedia I started reading about purchasing power. I was even unable to understand its first paragraph. The first para goes like:

Purchasing power (sometimes retroactively called adjusted for inflation) is the number and quality or value of goods and services that can be purchased with a unit of currency. For example, if one had taken one unit of currency to a store in the 1950s, it is probable that it would have been possible to buy a greater number of items than would be the case today, indicating that one would have had a greater purchasing power in the 1950s. Currency can be either a commodity money, like gold, silver and bitcoin, or fiat money emitted by government sanctioned agencies.

Suppose I have 10,000 in the year 2000 and at the same time my friend also have 10,000. We both wanted to save this money for future. I decided to put this cash in my lock whereas my friend decided to buy gold of it. For simplicity say my friend bought 1 kg of gold.

As I said I'm new to Economics so please be simple while explaining.

Any suggestions for further reading will also be appreciated.

Here is a chart from The Economist in July 2010 showing the nominal and real (i.e. inflation adjusted) price of gold in US dollars back to 1970. The nominal price later continued to rise until 2012 and then fell, and it is currently at about its 2010 level; the real price also rose and then fell and is currently below its 2010 level. The lines would look different in other currencies 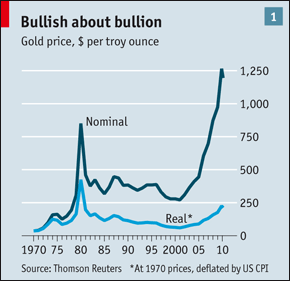 An additional consideration is that you can store your currency in a bank by depositing it, and you can then receive interest on it, which may offset the decline in the purchasing power. If you store gold in a bank, the bank is likely to charge you a storage fee and you will not receive interest

The price of a specific commodity (e.g., gold) need not have gone up, it can have changed in any direction. Your friend bought an asset that, in your example, increased in value. As such, it provided protection against the general increase in prices. It could have turned out that the price of gold fell during that period and she was worse off than you.

For your friend things are a little better:

Of course this is heavily dependent of what has happened to the price of gold during that period. If, instead, it had fallen to 9,000, then your friend's gold investment is worse than your money investment, because its year 2000 dollars value would be

Not the answer you're looking for? Browse other questions tagged inflation purchasing-power-partity or ask your own question.