Debt-to-GDP ratio in connection to inflation

On this segment of the Tucker Carlson show, interviewing Robert Hockett, as an advisor to Rep. Octavio-Cortez on the proposed Green New Deal, the following interchange ensues:

Tucker: "On the low end, this will be the most expensive thing the US has ever undertaken, including rural electrification, the Second World War,... And I'm just kind of wondering in a country that has more debt than GDP, how would we pay for that?"

RH: "Here's the key, [...], here is the take away - I want you to remember this; I hope everybody will remember this - inflation is a relation, right? It's the relation between the quantity of money and the quantity of goods. Now, if the money that you're spending is resulting in the production of a great many more goods, you have no inflation problem: more production absorbs more expenditure. The problem with the $7 trillion dollars that we spent during the Bush years, and of course, in the last tax cut is that it wasn't actually productive, but note that even that didn't bring about inflation."

Clearly, Robert Hockett seems to imply that in the absence of inflation, the high debt-to-GDP ratio is not an issue.

Can inflation (or absence thereof) be used as a sole indicator that the debt-to-GDP ratio is (not) having deleterious consequences?

In fact it would seem as though inflation would help repay the debt by making it cheaper, and that the real problem would come in the absence of inflation, having to service the interest on the debt through tax increases, or more debt...

Note the following passage in this answer by Brian Romanchuk:

...it is reasonably safe to argue that greater interest payments will squeeze out other spending if we want to keep inflation around a target level.

So interest on the debt would crowd out spending in other areas if inflation is to be contained. Naturally, there is the big distorting effect of the \$US acting as a haven investment strategy, potentially nullifing any linear relationship between debt and inflation. In fact it makes sense to consider the US as an aside case given that the $US is the reserve currency.

With all these caveats, inflation could act as an indirect indicator that the debt-to-GDP ratio is hard to manage.

That being said, it seems like a specious argument to claim that the stability of inflation following the last two rounds of tax cuts should be reassuring when two thirds of the US Budget go to non-discretionary spending as it is, and the projected cost of servicing the debt is about to surpass military spending, according to the NY Times: 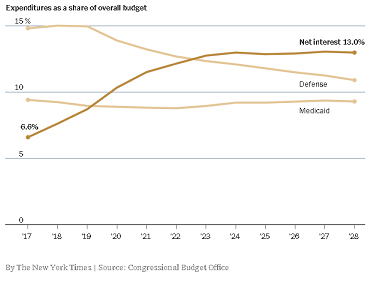 But this is a comment more directed to the argument in this case than to the actual question about the value of inflation as a metric of too-high a ratio.

The premise that a high debt-to-GDP ratio will imply higher inflation is questionable. If we look at the data for the United States, there appears to be a negative correlation: the ratio was lowest in the high inflation period of the 1970s to early 1980s.

As hinted by your question, growing the denominator (nominal GDP) lowers the ratio.

Unless one believes in the Fiscal Theory of the Price Level (described in other questions), there is no obvious link between the debt ratio and inflation.

If we drop the focus on the ratio and look at government spending, we arrive at the theory of Functional Finance: the constraint on government spending is inflation. That is, we need to look at the size of the deficit, what the government is purchasing now, etc.; the debt ratio just tells us about historical spending.

It looks like your question is really about the validity of Functional Finance, but you have written it up as being about the debt-to-GDP ratio.

Not the answer you're looking for? Browse other questions tagged macroeconomics inflation government-debt or ask your own question.

4
Why is a high government debt/GDP bad?

12
What Level of Government Debt to GDP Ratio is Sustainable?
2
Government debt and Fiscal Theory of Price Level
4
Why is a high government debt/GDP bad?
4
Why doesn't the government create money, spend it for free without interest, and recollect it with taxes?
3
Can debt to GDP ratio be reduced transfering debt to local autorities?
0
Debt Held By The Public
2
The link between economic growth, inflation, interest rates and fiscal deficit