I am trying to create a PPC, in which there are two goods (e.g. apples and oranges).

My question is, does it matter which goods are plotted on the x or y-axes? The opportunity cost per good remains the same, but I was wondering what the convention is.

$ \textbf{Answer:} $ Simply put, it does not matter which good goes on which axis as long as the relationship between the two goods is adjusted for correctly.

This can be done as long as the relationship (i.e. the PPC curve) is correctly maintained, that is the function is inverted when you change between the x and y axis.

Suppose you were given the ppf which was linearly defined $good_1$ as a function of $good_2$ by:

graphically this can be seen as; 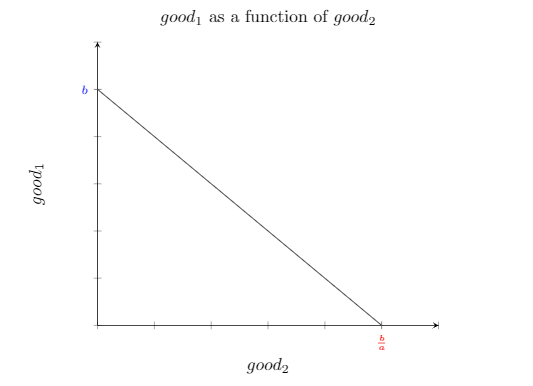 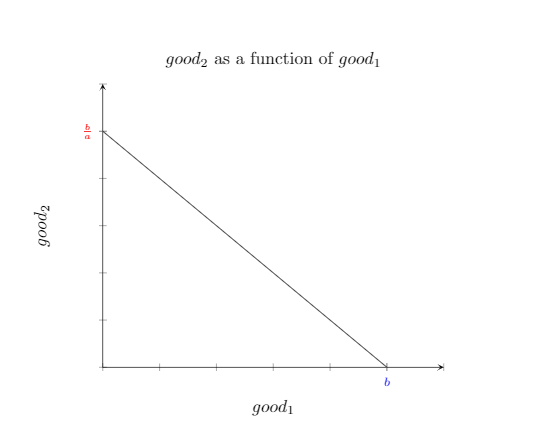 We can see that everything is the same, except that our axes are different but the relationship between the two good is exactly the same. The relationship is now inverted to accommodate the change of "perspective" between having $good_1$ or $ good_2$ in the axis, which is graphically seen by the change in the intercepts.

$*$ I apologise if this is not mathematically rigours, and would appreciate any feedback!

3
Basic microeconomics: supply, demand and substitutes in production
4
Perfect competition: Finding short run equilibrium price?
4
Can people lack a comparative advantage and a comparative disadvantage?
3
Marginal rate of substitution
1
Production under uncertainty
0
robinson economy with production
1
A question about the property of quasi-linear preference
1
How do different Indifference Curves relate to each other?