Proof of Choice Coherence in Kreps (2013)

In the first chapter of Kreps (2013), there is a proof that the choice function satisfies choice coherence. Kreps writes: 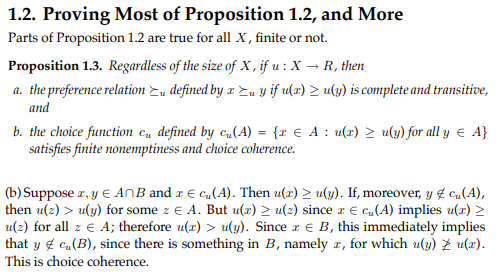 $c_u(A)$ is a subset of elements in the set $A$ that satisfies the following condition: if an element is in $c_u(A)$ then this element must generate a utility no lower than any other element in the set $A$.

In other words, $c_u(A)$ contains the decision maker's most-preferred element(s) in $A$.

Note that "$x$" in the definition is any element in $A$ that satisfies the bolded condition above, and "$y$" is any element in $A$ (without further restrictions). I emphasize the word any to highlight the fact that $x$ and $y$ are merely placeholders and therefore do not refer to specific elements in either set. In fact, we may well have defined $c_u(A)$ as $\{y\in A: u(y)\ge u(x) \text{ for all }x\in A\}$ and the interpretation/English translation will be exactly the same (i.e. verbatim) as in the quote-block above.

The rest of the proof should be straightforward from here on.

Let $A=\{a_1,a_2\}$. I'll leave you to verify that in this example, the textbook's proof works in the same way without loss of generality.

Not the answer you're looking for? Browse other questions tagged microeconomics utility preferences or ask your own question.

6
Local Non-Satiation Proof
7
Overlaping jurisdictions Model: Proof of Lemma 1; The Size of Nations
3
The use of preference relations in choice theory and the $\succsim$ symbol
2
Proof of Expected utility theorem with three outcomes
2
Proof of monotonocity of preferences
3
Trying to apply in practice the theory of finding the optimal price in a cournot competition
0
If an ordinal-scaled utility function is defined via strictly increasing transformation, how can it represent a case of indifference?
2
Is the satisficing choice function rationalizable if the ordering isn't observable?