How did the Federal Reserve determine 3.5T USD in assets?

The financial media have reported that...

In general, Fed officials appear to have converged to a minimum balance sheet of roughly $3.5 trillion, which means the runoff would end in the second half of the year Link

and it was also reported to come specifically from Chair Powell...

the chairman has said that the reduction in its bond holdings will end soon, with a balance sheet probably no lower than around $3.5 trillion Link

The level of 3.5 T USD will be arrived at, at the rate of 50 B USD per month as described here at this link.

How was the target level of 3.5 T USD determined?

Important note: Your second quote, which seems to be from The Associated Press, claims that Powell "has said that" the Fed will have "a balance sheet probably no lower than around \$3.5 trillion".

However, I am unable to find anywhere else any such quote or statement by a Fed member that explicitly states this \$3.5 trillion figure.

This though is the estimate that has been floating around for at least some months now — e.g. in Jan 2019, UBS economist Seth Carpenter predicted this particular figure for mid-2020. So, it is possible that the AP writer simply accidentally slipped it in.

the longer-run size of the Federal Reserve’s balance sheet will be considerably larger than before the crisis.

(1) projected trend growth for currency in circulation, (2) the Committee’s decision to continue operating with ample reserves, and the higher levels for (3) the TGA, (4) the foreign repo pool, and (5) DFMU balances (I added the numbering).

At its January 2019 meeting, the Federal Open Market Committee decided that it would continue to implement monetary policy in a regime with an ample supply of reserves, which is often called a “floor system” or an "abundant reserves system." Going forward, the banking system’s overall demand for reserve balances and the Committee’s judgment about the quantity that is appropriate for the efficient and effective implementation of monetary policy will determine the longer-run level of reserve balances. Although the level of reserve balances that banks will eventually demand is not yet known with certainty, it is likely to be appreciably higher than before the crisis (p. 42).

Before 2008, the Treasury targeted a steady, low balance of $5 billion in the TGA on most days ... In May 2015, the Treasury announced its intention to hold in the TGA a level of cash generally sufficient to cover one week of outflows, subject to a minimum balance objective of roughly \$150 billion. Since this policy change, the TGA balance has generally been well above this minimum; at the end of 2018, it was about \$370 billion, or nearly 2 percent of GDP. The current policy helps protect against the risk that extreme weather or other technical or operational events might cause an interruption in access to debt markets and leave the Treasury unable to fund U.S. government operations (p. 42)

The foreign repo pool has grown from an average level of around \$30 billion before the crisis to a current average of about \$250 billion (p. 43)

“other deposits” with the Federal Reserve Banks have also risen steadily over recent years, from less than \$1 billion before the crisis to about \$80 billion at the end of 2018. Although “other deposits” include balances held by international and multilateral organizations, government-sponsored enterprises, and other miscellaneous items, the increase has largely been driven by the establishments of accounts for DFMUs. DFMUs provide the infrastructure for transferring, clearing, and settling payments, securities, and other transactions among financial institutions. The Dodd-Frank Wall Street Reform and Consumer Protection Act provides that DFMUs—those financial market utilities designated as systemically important by the Financial Stability Oversight Council—can maintain accounts at the Federal Reserve and earn interest on balances maintained in those accounts.

Again, I am unable to find \$3.5T explicitly stated anywhere by the Fed/Powell. But at the current balance sheet of about \$4T, current pace of unwinding of about \$30–50B per month, and expected cessation of unwinding some time in mid-2020, \$3.5T is a nice round number that seems plausible and easy to quote.

There exist some projections resulting from the Federal Reserve surveying the market. In this linked report from the Federal Reserve titled "Projections for the SOMA Portfolio and Net Income" from July 2017 we see the Fed asked market participants what the balance sheet would look like in 2025. With a starting point of 4.5T and the rate of negative 50 B per month it does not take until 2025 to realize some of these numbers for total assets. 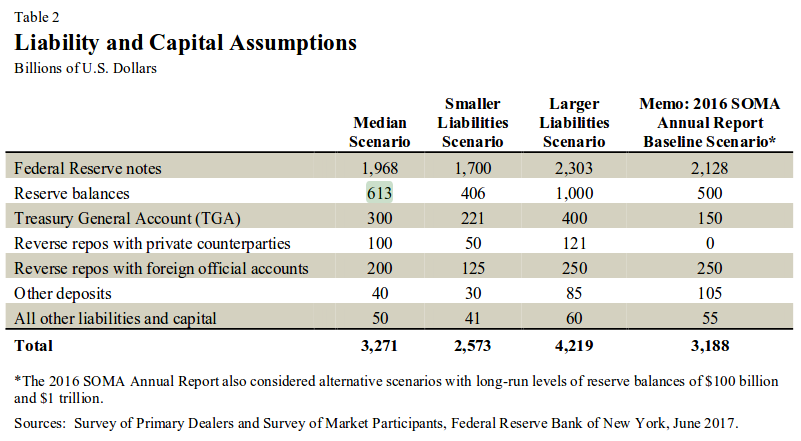 The size of the Federal Reserve’s normalized balance sheet is likely to be driven by the future supply of and demand for a variety of Federal Reserve liabilities.

Not the answer you're looking for? Browse other questions tagged federal-reserve or ask your own question.