Why is the USA not capable to pay its debt?

Why is the USA not capable to pay its public debt on its own?

The country needs to create new debt in order to pay its due debt.

Hungary and the Czech Republic are capable to pay their debt on their own but in the same time USA is not capable to pay its debt on its own. Why is that?

What makes a country not capable to pay its debt on its own?

The US is in a privileged position of producing a currency that people in other countries want to use (as reserve). There's even a French name for that. Anyway, a result of that is cheap credit for the US government:

Many believe that this dollar dominance has allowed the United States to live beyond its means, running sizable current account deficits financed by borrowing from the rest of the world at cheap interest rates. Some other countries have chafed at this “exorbitant privilege” enjoyed by the United States.­ [...]

There are tangible and intangible benefits to a country whose currency serves as a reserve currency. In addition to the prestige conferred by this status, it also means access to cheap financing in the country’s domestic currency and the benefit of seigniorage revenue—the difference between the purchasing power of money and the cost of producing it—which can be extracted from both domestic and foreign holders of the currency.­

In more mundane terms, the Chinese (and others) don't just hold on to their reserve dollars, but they then lend them back to the US gov't.

So the incentive to not be indebted is less than elsewhere.

In particular, the classical idea is that:

Economists say the US need not ever pay its debts back entirely, so long as the economy keeps growing enough to cover the payments.

But there are even more extreme ideas like the MMT, which says the US can pay even less than that.

Of course, you could ask, why don't the Chinese (and others) do something else with their dollars. The catch is that there's nothing better on the horizon, in a certain (risk averse) sense:

Moreover, there are no alternative currencies or investments that provide a similar degree of safety and liquidity in the quantities demanded by investors.

The reason the United States appears so special in global finance is not just because of the size of its economy, but also because of its institutions—democratic government, public institutions, financial markets, and legal framework—which, for all their flaws, still set the standard for the world. For instance, despite the Federal Reserve’s aggressive and protracted use of unconventional monetary policies, investors worldwide still seem to trust that the Fed will not allow inflation to get out of hand and diminish the value of the dollar.

(That was written in 2014, quantitative easing is even less controversial now.)

As for "can not": it is a matter of time frame and it is relative to other objectives. Here are some silly ways to pay the debt (quickly):

Under the auspices of ‘bailouts’ from the IMF and the EU, Greece cut more than 20 per cent of GDP in spending. It lost nearly 30 per cent in final consumption.

There's of course debate whether a little austerity will do that; it depends what you'd cut.

But here's an example what Greece cut (and didn't):

The International Monetary Fund (IMF), which joined the rescue of Greece in 2010 alongside the EU and the European Central Bank (ECB), never asked for defence cuts, but insisted on reductions to wages. So while the defence equipment budget remained intact, soldiers suffered a near 40% drop in salaries.

And that's actually a little misleading too, because (except for defense) investment tanked as well, in fact more than the GDP did, to some 40% of the pre-crisis value. 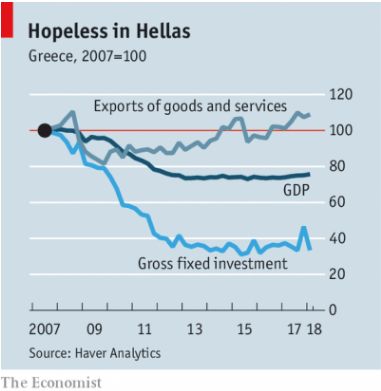 Someone with better macroeconomics knowledge may be able to quickly estimate what paying the whole US debt at one would do. But since serious sources dismiss the idea off-hand, I can't find a published calculation.

There's no quick fix for the debt that won't impact some other long-term goal.

Fizz gave a great answer. I also wanted to add a little to the original question. The US has no incentive to pay back its debts!

The US dollar is used as a major global Forex reserve. This helps to reduce risk in investing for the country buying US debt. The US then uses leverage to generate positive GDP above and beyond the rate of debt...rinse and repeat.

I don't think Hungary and the Czech Republic can be compared in terms of paying of debt. China, though an export economy versus US import economy, has $5.2T* of government debt (excluding private debt), which is more worrisome for an export economy.

Not the answer you're looking for? Browse other questions tagged government-debt public-economics comparative-economics or ask your own question.

1
Is it possible to pay the internal debt of the country and to cover the budget deficit by increasing taxes?

7
Why can't a government print money to pay its debt?
3
The appeal of low-dividend stocks when trading with government debt
3
Why is national debt bad if the central bank can keep buying bonds?
1
Is it possible to pay the internal debt of the country and to cover the budget deficit by increasing taxes?
4
What would happen to US economy before US government lose control over its national debt?
0
Won't countries be in trouble if all sovereign debtors demand payment?
1
Why is such a high US national debt not resulting in another great depression?