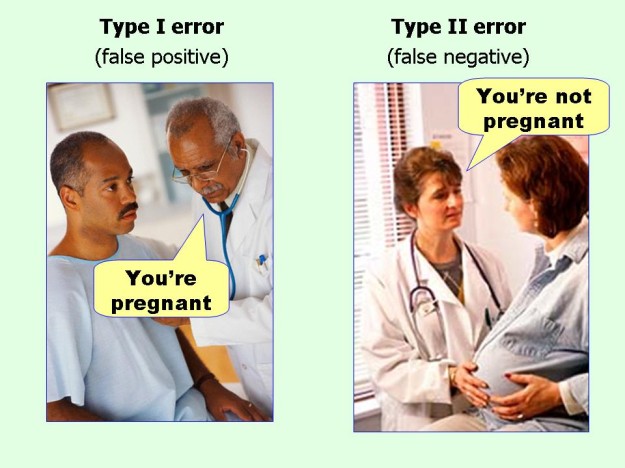 I found this picture in my stats book but I'm now confused to what 'positive' and 'negative' is referring to.

So my question is, how do the pregnancy analogy and whole 'false positive' & 'false negative' thing make sense?

For the first picture to be a type 1 error, H0 (null hypothesis) should be "The person is NOT pregnant" so that "You're pregnant" statement becomes false.

However, the second picture has the complete opposite H0, where H0 should be "The person is pregnant" so that "You're not pregnant" statement becomes false.

But based on the Chart given below, that doesn't seem to make any sense.

So the question is, is there anything that I'm missing here or is it just that textbook's analogy sucks?

so being pregnant would be the positive result.

You take a pregnancy test

I'm sorry, this is probably better a comment than an answer, but I don't have sufficient points:

In the diagram you've included, Type I and Type II errors are more properly conditional probabilities.

If H0 is considered as H0: PATIENT IS NOT PERGANENT AGAINST Ha:PATIENT IS PERGANENT,then all information in the pictures and table are logic. But normally ,when patient refers to check its pregnancy ,the patient is woman and her expectancy for H0 is :Patient is Perganent,,,,and this cause missunderstanding of above pictures

Not the answer you're looking for? Browse other questions tagged statistics probability or ask your own question.

1
Is there a name for this type of problem?
3
Goldfeld - Quandt test statistic equal to 1
2
Using the sample mean to test hypotheses
3
Multivariate linear regression: how to test for whether the slopes are the same?
1
Show that conditional variance of error in linear probability model is heteroskedastic?