GDP per capita and trade relationship 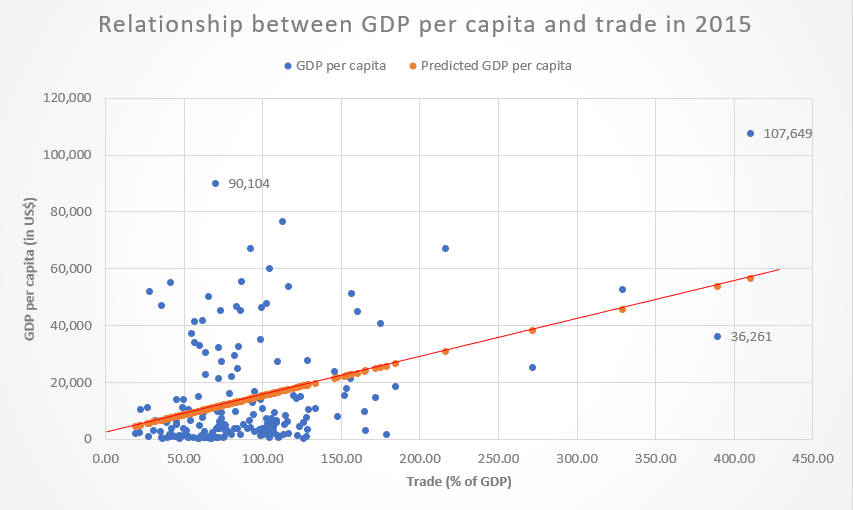 There's a lot of literature describing the relationship between growth and trade, but I'm not sure what conclusions I can draw from GDP per capita (specifically) and trade in one particular year for multiple countries. The graph is a regression I ran, so the red line demonstrates a positive relationship between the two variables in that year. But I'm also confused because the R squared value is very low, indicating a weak relationship. Is this because I have included too many countries in the test or because of the many other factors playing a part? Apologies as this question is probably quite stupid, but I'm very confused.

The reason that relationship weak is that there is a whole lot more influencing GDP than just trade. Not included in this analysis are things like commodity prices, types of exports, quality of institutions in a country, population. Countless others.

If you wanted to test the hypothesis that countries with higher levels of trade tend to be larger, you probably have. With such a simple analysis, it's probably hard to get much more than this.

Your trade figures are hardly normally distributed, which makes your model very susceptible to a few outliers. The GDP data might have a similar problem. Try a log-log (or a rank-rank) plot for instance. Looking at your assignment text, it doesn't seem to inquire about (or impose) a linear relationship between the raw values.

To summarize some stuff from the comments: two hypotheses are fairly common in the literature (but the first is much more common than the 2nd)

The trade intensity index (TII), constructed as exports plus imports divided by Gross Domestic Product (GDP), is the most commonly used measure for trade openness and increasingly for globalization as well.

The TII, however, often gives counterintuitive results when it comes to large countries. For instance, the U.S. is ranked way below Swaziland and Tajikistan by the index, and likewise China is ranked behind Cambodia and Laos [...]. These results are not surprising if the TII is (rightly) interpreted as a measure of trade dependency, as large countries are expectedly less reliant on international trade than the small ones. However, when the index is used as a measure of trade openness or globalization, the results become counterintuitive – considering the U.S. is a core nation in the world trade system while Swaziland and Tajikistan are far from that, and China is also way ahead of its two neighbouring countries as a trading power house. In short, the TII ‘appears’ to understate the degree of openness of large economies relative to small economies.

In fact, this issue has been noticed by many and there are some attempts in the current literature to ‘correct the size bias’ through modifying the TII [...]

Not the answer you're looking for? Browse other questions tagged gdp international-trade statistics or ask your own question.

4
World bank data - GDP per capita current US\$ vs constant 2005 US\$
11
Why are imports subtracted from GDP?
5
US trade outpaces GDP
3
What percentage of UK imports/exports were with the EU in the economic year 2015-2016?
1
Is the trade deficit driven by lack of domestic savings?
0
Does a drop in GDP per capita, with the population staying around the same, mean people on average are poorer?