Supply curve for a competitive firm with constant MC

I know that for a perfectly competitive firm, the supply curve is given by $p=MC \ge AVC$, where $AVC$ is the average variable cost. Now I get really confused when the $MC$ comes out to be a constant. How do I determine the supply curve in that scenario?

Consider a firm with constant marginal cost $c$ that chooses to supply a quantity $q \in [0, \bar{x}]$ when taking the price $p$ as given. The profits of such a firm can be written as

From this, we can immediately infer the optimal supply $q^*$:

Notice we need a constraint like $q \in [0, \bar{x}]$ for the supply correspondence to be well-defined. If we had simply restricted $q$ to $\mathbb{R}^+$ (the non-negative real numbers), as is more usual, then there would be no solution to the profit maximisation problem in the case of $p>c$.

You know that in a perfectly competitive market a firm's supply curve is dictated by $p = MC \geq AVC$. Supply curves can be upward sloping but they don't have to be. Graphically this is represented as: 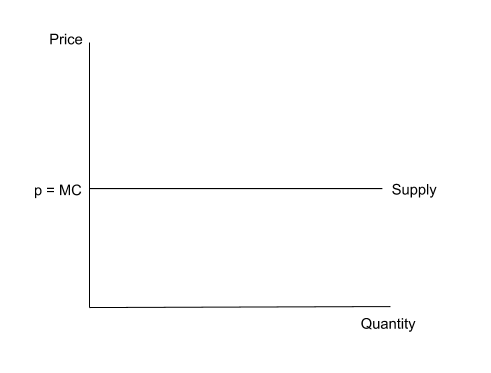 Marginal costs are constant, so finding the equilibrium will involve finding the quantity demanded at the given price, rather than the usual set up of $Q^{d} = Q^{s}$, because the supply curve is perfectly elastic (i.e. an increase in demand can be met without any change in the price). So rather, you find the price and substitute for price in the demand curve. That's the equilibrium quantity.

Edit: I am adding here a possible interpretation for MC=0

In this case you have that MC = 0. So how can this be interpreted? It is easy to see that at p=0 the quantity demanded is equal to 4, a case in which production would entail that average costs exceed marginal costs. Moreover, they do so over a wide range of output. What happens here? Well, these properties are precisely those of a natural monopoly. As a result one firm, will be able to provide a given amount of output at a lower average cost than would several competing firms. The resulting situation that you need to analyze is that of a monopolist equilibrium with zero marginal costs.

0
Cost function and short run supply
1
Optimal production level for a typical firm in long-run
1
Why is ATC tangent to Demand in a Monopolistic or Mopolistically Competitive Firm Making Zero Profit?
2
A question of deriving an industry supply curve from cobb-douglass production function
1
Algebraic demand curve in a perfectly competitive market for a firm
2
Supply curve when the marginal cost is zero
0
Individual Firm and Market Demand Curve
1
Determining the elasticity of a supply/demand curve visually