Bergeman and Morris (2014) explain how the concept of Bayesian Correlated equilibrium contains all the robust predictions in games of incomplete information. In particular, their question is what are the possible Bayesian Nash equilibria of a game where we know each player has at least some information, but can potentially have more information.

Does anyone know of a useful reference to think of refinements of the set of BCE by imposing further assumptions? For example, what if we were willing to assume that one of the players has at least as much information as every other player? What kind of refinements can we expect to maintain the nice linear properties of BCE?

Any thoughts will be greatly appreciated.

It seems to me based on the 2019 JEL review of the same authors that they had published more-or-less what you ask about in a 2015 paper about monopolies and price discrimination (as an application of their BCE theory); see section 5 (and 5.1 in particular) in the 2019 paper. Here the relevant information is the monopolist's knowledge of the consumers valuation. Here are some snippets:

A classic issue in the economic analysis of monopoly is the impact of discriminatory pricing on consumer and producer surplus. A monopolist engages in third-degree price discrimination if he uses additional information about consumer characteristics to offer different prices to different segments of the aggregate market. Bergemann, Brooks, and Morris (2015) characterize what could happen to consumer and producer surplus for all possible segmentations of the market.

One can provide some elementary bounds on consumer and producer surplus in any market segmentation. First, consumer surplus must be nonnegative as a consequence of the participation constraint: a consumer will not buy the good at a price above his valuation. Second, the producer must get at least the surplus that he could get if there was no segmentation and he had no additional information beyond the prior distribution. In this case, an optimal policy is always to offer the product with probability one at a given price to all buyers. We therefore refer to it as uniform monopoly price, and correspondingly, uniform monopoly profit. Third, the sum of consumer and producer surplus cannot exceed the total social value that is generated by the good, which is willingness-to-pay minus unit cost of production. The shaded right-angled triangle in figure 5 illustrates these three bounds. 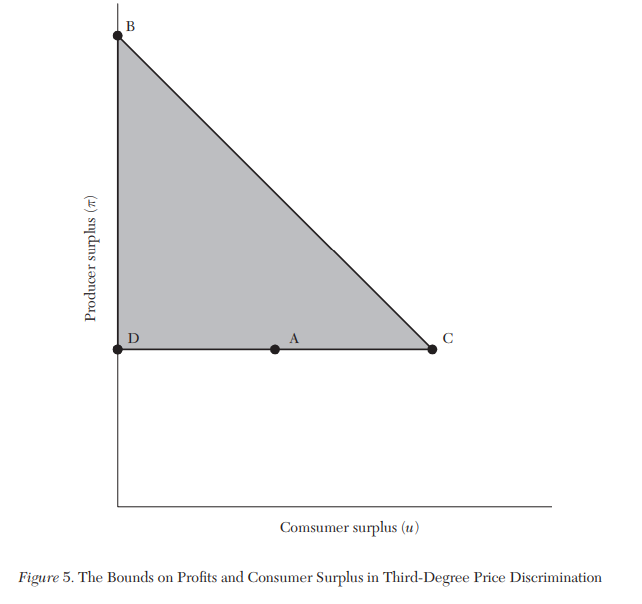 The main result in Bergemann, Brooks, and Morris (2015) is that every welfare outcome satisfying these constraints is attainable by some market segmentation. This is the entire shaded triangle in figure 5. If the monopolist has no information beyond the prior distribution of valuations, there will be no segmentation. The producer charges the optimal monopoly price and gets the associated monopoly profit, and consumers receive a positive surplus; this is marked by point A in figure 5. If the monopolist has complete information, then he can charge each buyer his true valuation, i.e., engage in perfect or first-degree price discrimination; this is marked by point B. The point marked C is where consumer surplus is maximized; the outcome is efficient and the consumer gets all the surplus gains over the uniform monopoly profit. At the point marked D, social surplus is minimized by holding producer surplus down to uniform monopoly profits and holding consumer surplus down to zero. The main result states that we can make only very weak predictions about producer and consumer surplus. It can be understood as the outcome of a set of metaphorical information design problems. If an information designer wanted to maximize consumer surplus, she would choose point C. If she wanted minimize consumer surplus, or producer surplus, or any weighted combination of the two, she could choose point D. Any other point on the boundary of the triangle is the solution to some maximization problem of the information designer defined by some preferences over producer and consumer surplus.

[...] One can show that any point where the monopolist is held down to his uniform monopoly profits with no information beyond the prior distribution—including outcomes A, C, and D in figure 5—can be achieved with the same segmentation. In this segmentation, consumer surplus varies because the monopolist is indifferent between charging different prices. [They then give a numerical example, which I omit here.]

[...] Roesler and Szentes (2017) consider a related information design problem in which a single buyer can design her own information about her value before she is facing a monopolist seller. While the analysis of the third-degree price discrimination proceeds as a one-player application, the arguments extend to many-player settings. Bergemann, Brooks, and Morris (2017a) pursue the question of how private information may impact the pricing behavior in a many-buyer environment. There, we derive results about equilibrium behavior in the first-price auction that hold across all common-prior information structures. The results that we obtain can be used for a variety of applications, e.g., to partially identify the value distribution in settings where the information structure is unknown and to make informationally robust comparisons of mechanisms.

Not the answer you're looking for? Browse other questions tagged reference-request bayesian-game asymmetric-information information or ask your own question.