Emergence of notion "primitive business" in the era of Industry 4.0 and globalization

It has always been the conventional wisdom that businesses should be fit to survive in the market competition, that only the best businesses can survive beyond horizon of several years, that survival of some enterprise certifies both its style of conducting business and its general meaning for the society.

But Industry 4.0 and globalization has created 2 interesting trends:

So - both those trends do very much good to the society, but those trends also create opportunities for the unhealthy, unethical companies without investment and use of technologies to emerge, so - in short - primitive businesses can exists, survive and even thrive in this new era.

p.s. I am aware about the usual thinking that any jobs are good in the era when automation automates away the jobs and that people should work whatever that means. But there is escape from the low standard jobs either by Universal Basic Income or by Universal Dividend (better yet) and people will not become vegetables in these settings, because, the mentally healthy people, according to Maslov et el, prefer self-realisation (science, arts, travelling, volunteering, etc., etc.) and not laziness (and there should be treatment for mentally unfit people).

There surely is research about the complement(s) of the (low tech) "primitive businesses", i.e. the high-tech and/or innovative businesses.

The US CES for instance publishes a BDS-HT (Business Dynamics Statistics - High Tech) report. You can compare these with the core BDS data and get an idea how the high-tech sector differs. The US CES method of high-tech business classification is based on the number of STEM employees.

Ultimately, High Tech industries account for about 4% of firms and 6% of employment. 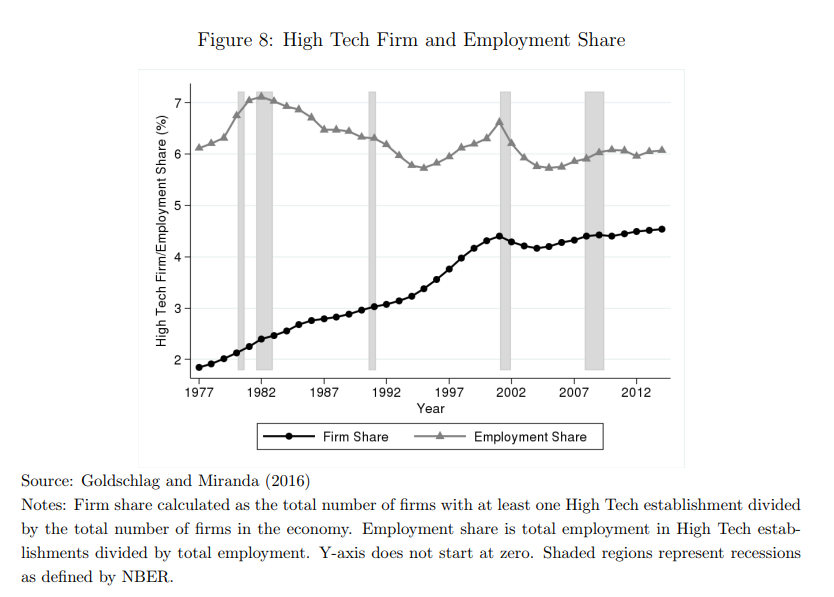 So there are a lot "primitive businesses" by this standard, even in the US.

A different method is used by CES for finding/reporting "innovative firms", BDS-IF. This is based on patents (BDS-PF) and trademarks.

I'm guessing the German Industrie 4.0 that motivated your question is probably similar to BDS-HT, but I don't know their exact methodology.

5
What determines whether slavery is economically efficient in industrialized/modern era economies?

11
The Case for Basic Income in developed and underdeveloped countries
1
Developmental studies and industrial policy for the highly developed countries - research trends?
4
General model of economics, economics as mathematical structure
4
Does brain drain really affect a nation's growth trajectory?
1
Inequality and Growth: the Role of Democracy
5
Has it truly been established that the restaurant industry operates on thin margins?
0
What value does a worker whose job could be automated provide to society?