According to the theory that I'm seeing on the internet and in textbooks, when a government wants to correct underproduction due to a positive externality of production, they can decide to subsidize the good. 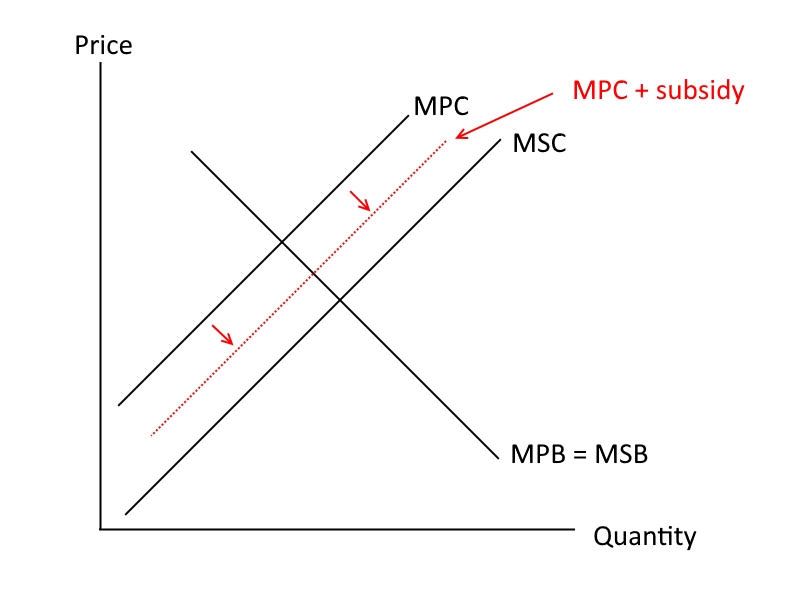 The subsidy would reduce the costs of production for the firm, and hence shift their Marginal Private Cost to the right towards the Marginal Social Cost curve. In an ideal situation, the curve could be made to actually lie on the MSC curve, and the underproduction would be completely solved.

The problem I have with this is that nobody talks about why it's possible for the MPC to ever get closer to the MSC curve. The formula for Social Cost is Private cost + external cost (which is negative in the case of positive externalites of production). So if I were to reduce the private cost of the good, then it's social cost would also reduce. In other words, if I move the MPC curve forward, the MSC curve should also move forward by the same amount.

The social cost of a product is the value of the resources that are consumed for its production, irrespective of property rights (and a "negative externality" is nothing else than resources consumed, e.g. a contaminated river due to pollution from production reduces the "natural resources" of society etc).

By subzidizing the product you do not affect the amount of resources that are consumed in order to produce it. What you do is to perform a re-allocation of resources from the public purse to the private producer to increase output. So social cost remains unchanged.

The amount of external cost is determined by the level of production in this framework.

Not the answer you're looking for? Browse other questions tagged microeconomics social-welfare externalities market-failure or ask your own question.

13
Differentiate a positive externality and the absence of a negative externality. Tax or subsidize?
0
Why is the social value curve NOT the supply curve shifted downwards?
3
How do you reconcile the Law of Increasing Opportunity Costs and Economies of Scale?
3
Is there really an "efficient equilibrium *price*" with externalities?
0
(Microeconomics) How to classify Public Goods and Common Resources in Externalities?
1
Relationship between the Tragedy of the Commons and negative externalities?
1
I don't understand how a graph would look like for this situation