Will the third Heathrow runway fill up within 25 years?

From a Wired article published 9 June 2018 about the proposed third Heathrow Airport runway:

But Warnock-Smith1 warns that Heathrow will eventually fill up again unless air travel is redistributed to make use of spare capacity at other UK airports. “Otherwise in 25 years, we will be having the same debates about a fourth runway at Heathrow,” he adds.

Did Warnock-Smith base his estimate on something (e.g. a mathematical model) or was it "an off-the-cuff remark"? Have there been published studies on this topic?

Note 1: This question does not belong on Aviation.SE. (see here)

Note 2: This question does not belong on Skeptics.SE. (see here)

It seems that Warnock-Smith is basing his remark on the official Airports Commission forecasts (made in 2014).

I did find a forecast by OAG with this conclusion about the 3rd Heathrow runway:

In our cautious assessment of the opportunities, we project that over half of the new capacity could be used within two years from opening, if not faster allowing for existing carrier expansion. For such a large capacity increase to be absorbed so quickly it highlights the case for new runway capacity in London and the South East. It also suggests that we should already have a third runway and perhaps be planning a second elsewhere!

It does have some 20 pages of forecasting by segment (destination) before coming to this conclusion.

I see a weakness that it's based on the current EU Airport Slot Regulations at least for connections with the EU, so who knows what will happen with Brexit etc. They don't analyze that scenario.

Also, this OAG model is unconstrained, in the sense that it assume capacity at corresponding airports elsewhere will increase keeping up with demand.

The Airports Commission has a much more detailed (and technical) forecast using various scenarios, including constrained capacity elsewhere, and considering other factors like carbon-caps. It's quite a long document and a lot of it is focused on mmpa (million passengers per annum) forecasts rather than runway capacities, but it does say this on p. 125:

By 2050 the additional 260,000 ATM [Air Transport Movement] slots from the new Heathrow capacity has been fully utilised for many years in all the demand scenarios. [footnote: Ranging from 2032 in global growth to 2042 in global fragmentation.]

These are two scenarios they ran. So it does seem that the answer (of Heathrow filling up again in 25 years) is yes in these Airports Commission forecasts. The 25 years number seems to coincide with the 2042 (-25 = 2017) forecast, so it's perhaps a rounding of a real forecast, not pulled from thin air.

The timelines illustrate that, if carbon is capped, the new runway at Heathrow is fully utilised by 2034 in low-cost is king and by 2040 under the other four demand scenarios. By 2050 London City with its short-haul network would be fully utilised under three of the scenarios but none of the other 3 London airports would reach full capacity by 2050 under any of the five scenarios. 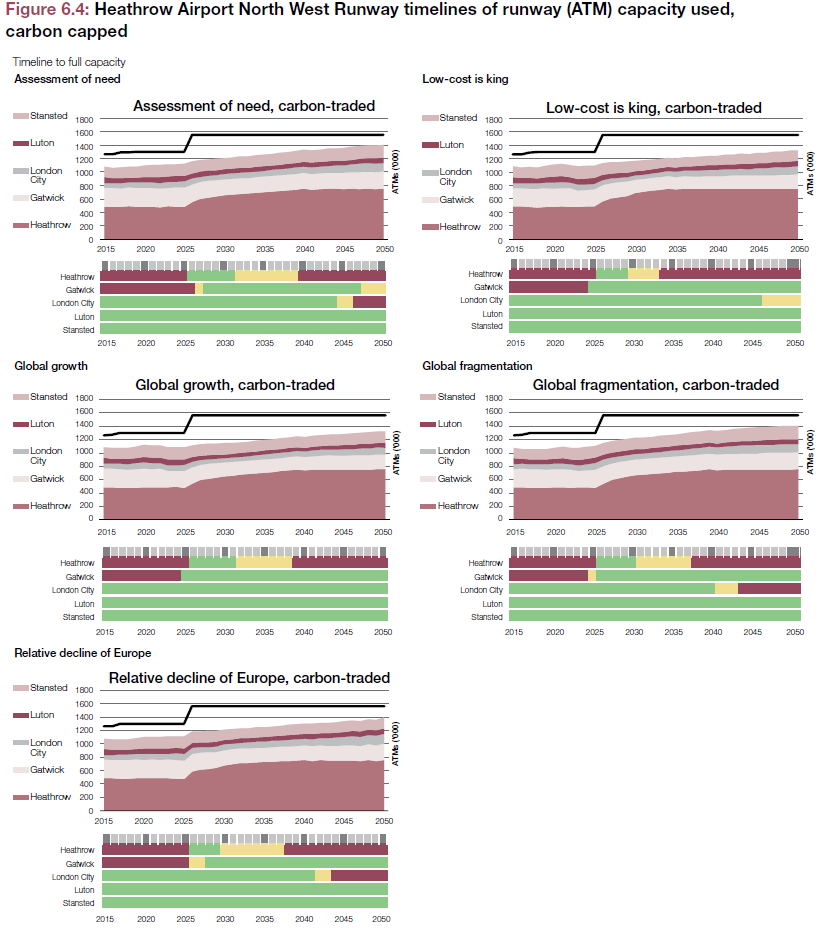 These scenarios have assumptions that are detailed over many pages (pp. 38-48), so I'm not going to reproduce them here.

Heathrow Airport Limited (HAL; the promoter of the Heathrow Airport North West Runway option) has actually written a critique of these government forecasts, claiming that they are too conservative; HAL claims the demand growth would be even faster.

Both of these latter documents (Airports Commission, HAL) were written/published around 2013-2014, so there is the issue of them not anticipating Brexit.

It is difficult for anyone here to know exactly what Warnock-Smith had in mind with his comment or whether he has conducted some analysis prior to his comment.

Nevertheless, he may be referring to the research on congestion in general, which has largely focused on road travel.

It is well-known that, contrary to popular belief, increased capacity can make congestion worse. The reason for this is so-called "induced demand". Once there is a larger capacity, a demand increase will typically follow, thereby keeping congestion at the same rate or making it even worse. One mechanism behind this increased demand is that there could be a latent demand already underlying. This means that there are consumers who want to take trips, but don't due to congestion issues. However, after the capacity increase, the realized demand increases.

This phenomenon has been observed for example with increased highway capacity, as noted in this news piece. For a literaure review on highways, see Susan Handy's 2015 article "Increasing Highway Capacity Unlikely to Relieve Traffic Congestion".

14
Larry Summers on the causes of secular stagnation
4
Why not say the buyer will *definitely* buy at price X?
6
Literature on the effects of third-party certification on industrial dynamics?
0
How will the UK's economy be affected, if it will be a hard Brexit?
3
The economics of a "no deal" Brexit