Is the price-quantity diagram fundamentally wrong?

I have wondered about the following diagram: 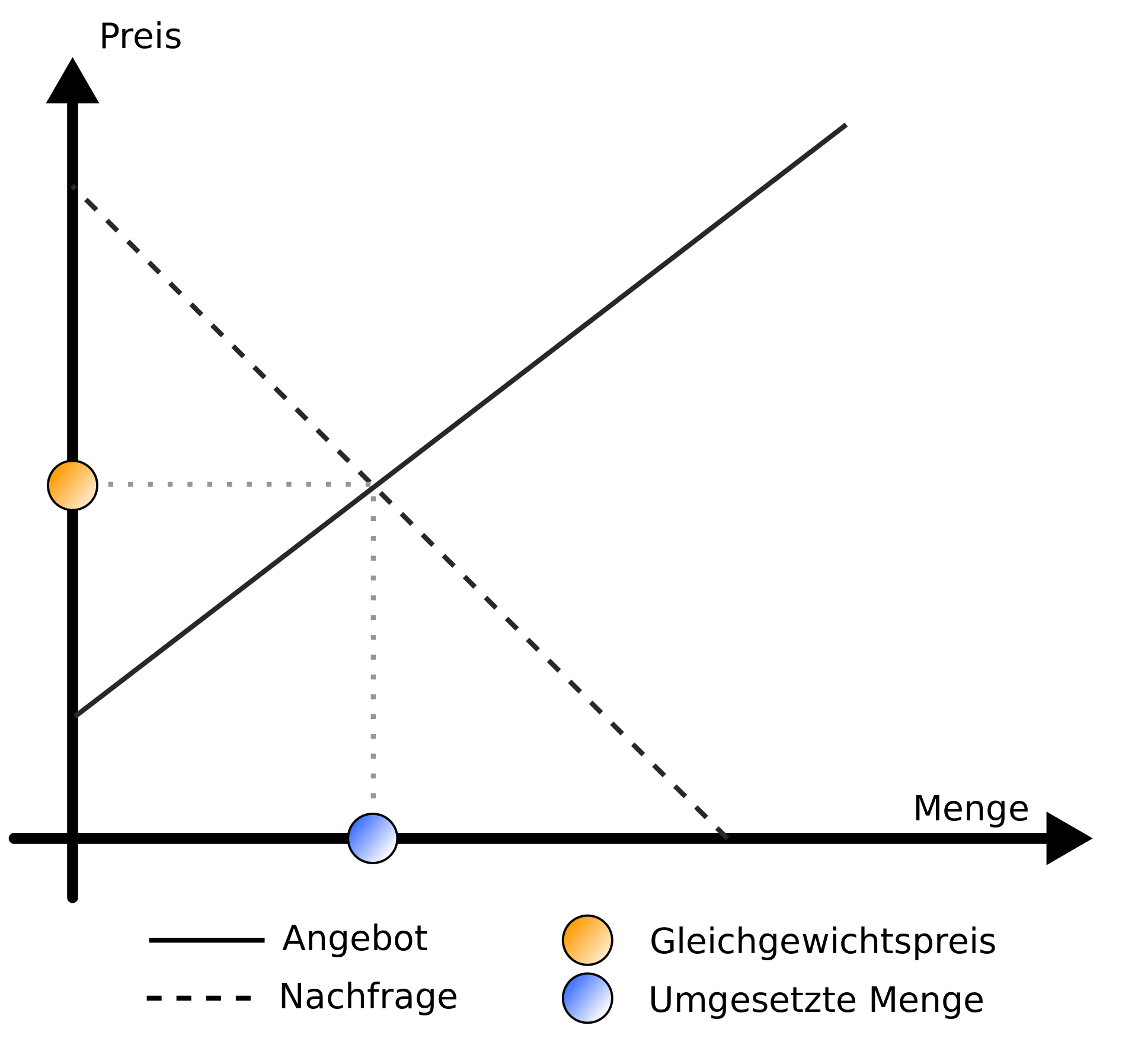 which shows a relationship between Price (Preis) and quantity (Menge). The supply (Angebot) curve is rising with the amount; the demand (Nachfrage) is decreasing.

As a guy with some mathematical intuition, I am wondering about many things here:

So how do you explain this?

The graph you've depicted is just very generic supply and demand intersection, under the generic/introductory assumption that an equilibrium price exists.

Even at this level of abstraction, the demand curve is perfectly flat for a price taker, so it's not always the case that those two functions (supply or demand) are always a bijection between price and quantity. That should address some of your confusion/question (1).

Furthermore, some introductory econ texts are bad at explaining that even a this level of abstraction, the market and an individual firm may have completely different price-quantity graphs; the graph you've shown is valid for a competitive market as a whole, but not for individual producers in it. Here's standard textbook slide of the better variety, which does make this distinction. 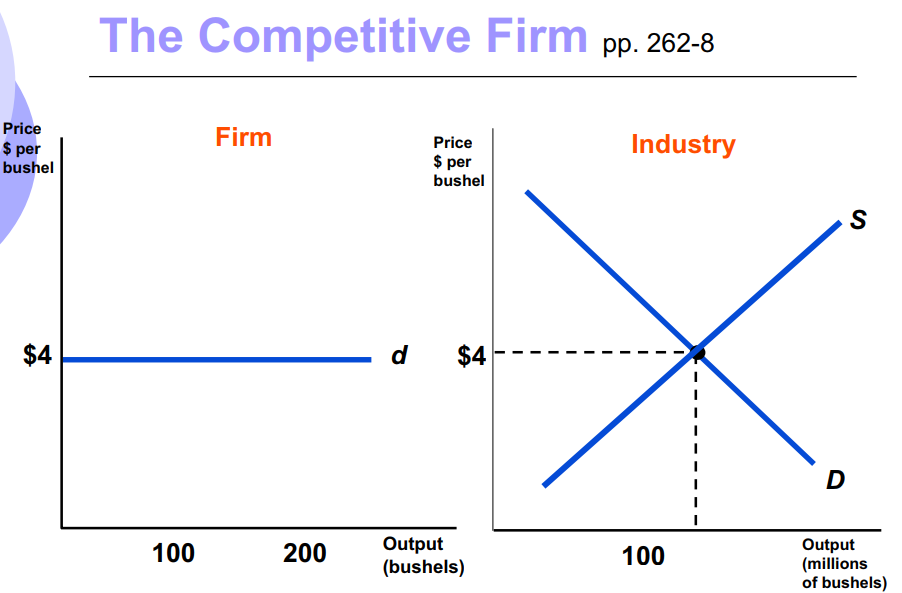 Demand curve faced by an individual firm is a horizontal line

Each firm is so small that its sales have no effect on market price. As a result, each regards market price as given.

Shows amount of goods all consumers will purchase at different prices

Your main question (2) involves a production cost, which does not appear depicted anywhere on that graph. The production cost isn't necessarily the same thing as the producers' price-output curve.

Even in the case where the market consists of only one supplier (a monopoly), so when the (producer) firm and industry graphs coincide, one needs to plot additional functions for the marginal return and marginal cost to start talking about profits. Even in this case, the discussion isn't trivial, e.g. it depends whether the monopoly can engage in price discrimination (sell to different consumers at different prices). 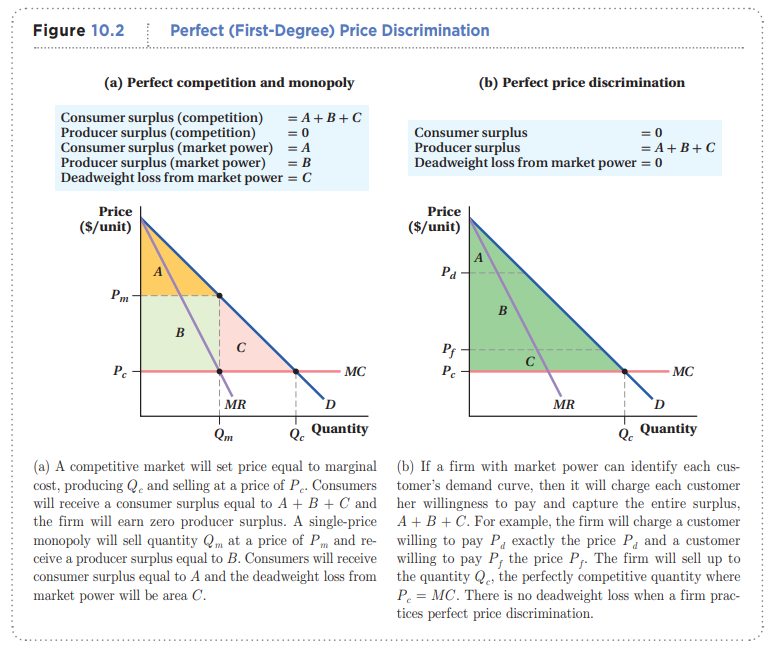 As for your specific scenario in (2):

If someone is willing to buy 1 billion "Goods", and my production cost is lower than what he offers - I will produce 1 billion "Goods" for them (assuming that I can) after I tried to get a better price - since I will make a profit after all.

This is closer to a how a price-taking producer (aka perfect-competition producer) optimizes output. Remember from the first diagram, that the demand from its perspective is flat, so that entails a linear total revenue (or, equivalently, a constant marginal revenue):

Note that the demand isn't even included in this graph except implicitly as the slope of the total revenue. However, since it follows that in order to maximize profits MC = MR = P (again under the perfect competition assumption), then the marginal cost is equal to the externally set price (for a price-taking producer), so the intersection of the price (demand) and MC gives the quantity:

My teacher told me I could only read from price to quantity. Since we are speaking of bijectives functions; this is wrong.

It is true that a mathematical bijection can be read both ways. Both directions (demand function and inverse demand function) are used in exposition in different economic models. However, that does not mean what the graph is trying to convey is equally conveniently readable both ways, and we often think of this direction in terms of some "causal" relationship. The model of competitive market generally portrays consumers and producers as price takers, that is, they observe what the price is and choose the quantity (to consume or produce) that optimise their objectives. Reading from price to quantity has apparent economic intuition: if X is more expensive, then consumers want to consume less X.

If someone is willing to buy 1 billion "Goods", and my production cost is lower than what he offers - I will produce 1 billion "Goods" for them (assuming that I can) after I tried to get a better price - since I will make a profit after all. Therefore this diagram makes no sense; the amount the producer offers is only determined by the production cost, the production ability and the demand of the goods. The producer will always try to satisfy all demands as long as they make a profit. Naturally, they will try to bargain about the price and sell to the highest bidder in the first place.

First, one specific part where I think your understanding of the graph says is wrong is "the amount the producer offers is only determined by [...] the demand of the goods". The demand of the good has no bearing on the supply curve. The question that the supply curve asks is: if the the producers can sell the good at the price P per unit, how many will they want to produce/sell?

(1) If you are only looking on the graphic, then your remark is absolutely correct. However, your teacher knows how the graphic was derived, and under this background your teacher was also correct with the quoted statement. Behind the graphic some optimization problems of a representative firm and household are hidden. Since your teacher read the graphic from price to quantity, the decision variable of the firm is the price, otherwise it would be the quantity. Firms can compete on price or quantity. Thus, the supply curve of the firm is derived from the technology set, and the demand curve of the consumer from the preference set.

(2) Concerning your second statement, we have to recognize that at the equilibrium, the price is equal to the marginal cost, that is, the last firm that enters the market makes no profit. Or to put it differently, the last unit sold in the market generates no surplus to the firm. Similar for the last consumer who enters the market has no surplus in his utility or to state it again differently, a consumer can not generate a surplus from consuming the last unit.

Thus, the surplus of a firm associated with a given level of production is given by $PS(x):=p\cdot x - c(x)$, this implies in order to get the whole producer's surplus you have to take the integral within interval from zero to the equilibrium quantity. Analogously, for the consumer's surplus that is associated to a certain level of goods, which is given by $CS(x)=u(x)- p\cdot x$, here $u(x)$ is the utility level of the consumer at level $x$.

If we interpret the graphic as you did, then there is nevertheless no bargain about the price and no competition on the first place in the market. Since, at the first place enters the firm that produces the good with lowest cost, then enters the firm with second lowest and so on till we reach the firm where the marginal cost is just equal to the equilibrium price.

I hope that will clarify the facts.

Not the answer you're looking for? Browse other questions tagged consumer-theory price-theory or ask your own question.

4
Book Recommendation: Price Theory
2
Price difference of substitute goods when the supply increases?
1
How to calculate price function from demand curve when marginal cost is given?
1
How to maximize revenue by changing price?
0
Driving down the price of a good
2
Phenomenon of equal prices without price collusion
1
In Smith's theory, what is the difference between the "nominal price" vs. "market price" and "real price" vs. "natural price"?