The concept of a market or consumer basket is quite intuitive. I assume a market basket for a given country tells for which goods an average person spends how much of her money.

To be able to compare market baskets between different countries (and cultures) their (groups of) items must be chosen quite generically (such that they make sense everywhere in the world). The official German market basket as found here includes the following groups of items:

It's very likely that that these major categories in the hierarchy of goods in the market basket differ somewhat by country. The sub-categories within these major groups are even more likely to differ across countries, as the market basket is supposed to reflect the purchases of a typical consumer, and typical purchases are obtained from consumption surveys of the population.

In the U.S., the eight major categories used for calculating the rate of inflation (Consumer Price Index) are:

In Canada, the major groups are:

The EU has a harmonized CPI methodology (HICP). It has sometimes been applied (e.g. in OECD/G-20 contexts) to the US for comparison purposes. There's more to methodological harmonization than what goes in the basket (e.g. which areas are covered or the formulas used for aggregation).

There's also an attempt to standardized the basket in UN's COICOP; alas few countries use that as-is.

Some selected quotes from a G-20 CPI paper, which is quite detailed:

The preference for the use of the HICP, when available, rather than the national CPI is founded on the fact that Eurostat has developed a harmonised approach and a single set of definitions in order to arrive at comparable measures of inflation in the EU. Given the higher comparability of the HICPs, the use of HICPs when available is considered appropriate for the compilation of the CPI G-20 aggregate. The availability among G-20 economies is as follows:

France, Germany, Italy, and Turkey publish both HICPs and national CPIs. The methodology used for the HICPs differs from the methodology used for the compilation of the national CPIs. [...] In general terms, the main methodological differences between the HICP and the national CPIs are as follows: 1. Coverage: Excluded from HICPs are: Narcotics (COICOP / HICP 02.3); Imputed rentals for housing, including rentals of owner-occupiers (04.2); Games of chance (gambling) (09.4.3); FISIM (financial intermediation services indirectly measured) (12.5.2); and part of personal care services n.e.c. (12.1.3 ) (example: prostitution); 2. Treatment of subsidized healthcare and education: the HICP includes the net price paid by consumers (after reimbursements); 3. Formula used for elementary aggregates: the HICP use is ratios of arithmetic mean prices and/or ratios of geometric means; 4. Geographical and population coverage: the HICP covers all expenditures on the territory of the country concerned, whether made by residents or non-residents (e.g. tourists).

Regarding baskets in (other) G-20 countries:

The COICOP classification of consumer expenditures and prices on goods and services by purpose is only strictly applied by Korea and South Africa, while the COICOP/HICP classification (which is the COICOP classification adapted to the needs of the HICP) is used for the European Union and by Turkey. The other G-20 economies use national classifications which in some countries, such as Australia and Japan are consistent with COICOP at the highest level. Table 7 gives an overview of the systems of classification used and highlights the specific exclusions or inclusions by country. 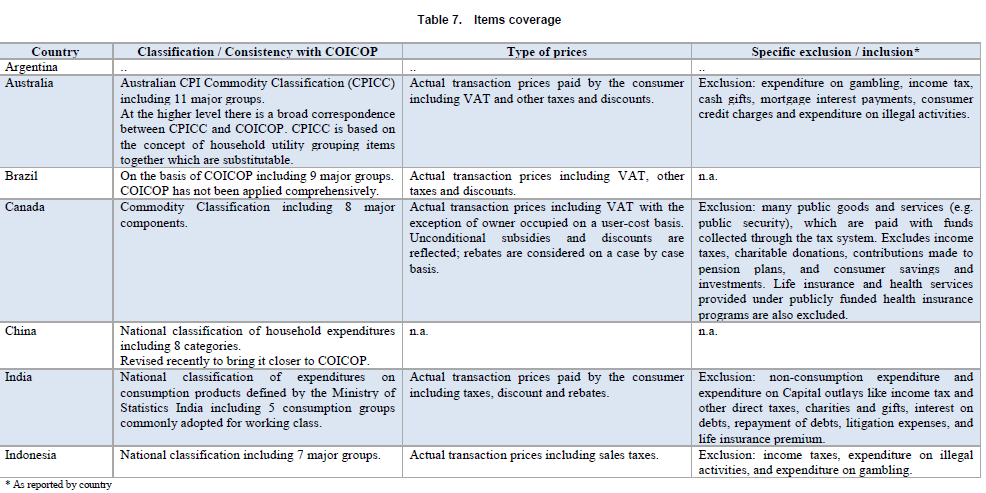 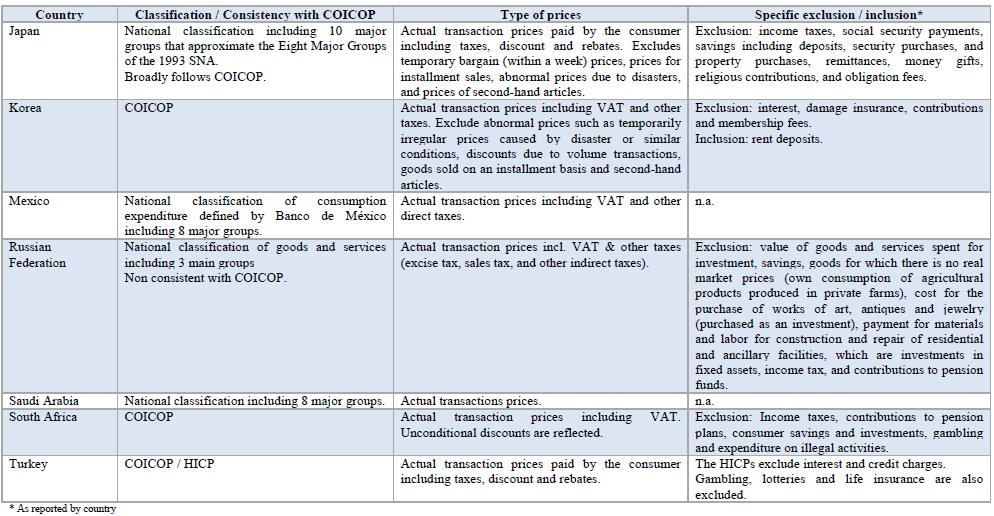 There is more to say about housing costs as well, in terms of methodological variation between countries, but I'm omitting that here; the paper covers it in detail too.

Also the CPI aggregation method may differ between countries:

The compilation of a CPI consists of two main stages: 1) the calculation of unweighted price indices (mostly price ratios) for elementary aggregates, and 2) the weighted aggregation of these elementary price indices for higher level aggregates. [...]

Methods used for combining prices to give elementary aggregates vary widely among the individual countries of the G-20, the geometric mean (Jevons index) is the method most commonly used (10 countries plus France, Italy and the United Kingdom). All G-20 economies use a Laspeyres-type formula for their published CPIs [but there are some variations in details for that as well].

There's also a table with those aggregation/index formulas per country, in the G-20 paper.

Not the answer you're looking for? Browse other questions tagged microeconomics econometrics consumer-theory consumption or ask your own question.