Are there economic models that predict (only) a medium/long-term negative effect of protectionism?

For illustration, I will use the results of simulations carried out by ECB staff using both the ECB's global model and the IMF’s multi-country model. As with all models, the uncertainties involved mean precise estimates from these scenarios should be treated with caution, but they are useful to explain the different channels at work.

To illustrate the potential effects of rising protectionism, I do not want to dwell on the specifics of the tariffs currently being discussed. This would miss the bigger picture. I rather want to consider a hypothetical scenario where the United States raises tariffs on all imports of goods by 10 percentage points, and its trading partners impose the equivalent on US exports.

According to our model simulations, such a scenario would have significant adverse effects on the global economy, including, and in particular, on the economy that raises tariffs in the first place. Specifically, real economic activity in the United States could be up to 2½% lower than in the baseline in the first year alone. [Gives some reasons for this.]

In other words, the overall scenario is clearly a net negative for the world economy as a whole. According to ECB staff simulations, world trade in goods could fall by up to 3% already in the first year after the change in tariffs and world GDP by up to 1%. Euro area GDP would also decline, but by less than in the US.

They don't make any longer term estimates for the effects of such tariffs, just mention that the EU would have been worse of by 1/5 without the economic integration since the 1950s.

Frankly it looks doubtful that US economy is showing any of that (short-term) trouble.

Are there any theoretical models of protectionism that predict short-term gain but medium or long-term loss for a country?

(Well, there's one BIS paper that advances a sort of short-term masking effect for the current US economy by advanced shipments/stockpiling:

It’s paradoxical that the United States is starting to put obstacles in the road at a time when its economy is firing on all cylinders. Even looking through the short-term boost to GDP in the latest quarter [citing data from July 2018] – ironically enough, partly owing to companies bringing forward cross-border shipments to skirt tariffs – its short-term prospects are promising. But in the long term, protectionism will bring not gain, but only pain. Not just for the United States, but for us all.

But this looks to me fairly anecdotal...)

This is not exactly what I was looking for, but seems "good enough":

I found a recent empirical paper by IMF staff (Furceri et al., 2018) applying Jorda’s local projection method to a panel of data of 151 countries over 1963-2014. They found/predict negative effects from the first year after the measures are introduced, but the effect size on output looks pretty small and given the confidence band it can well still go up for some years after the measures are introduced. 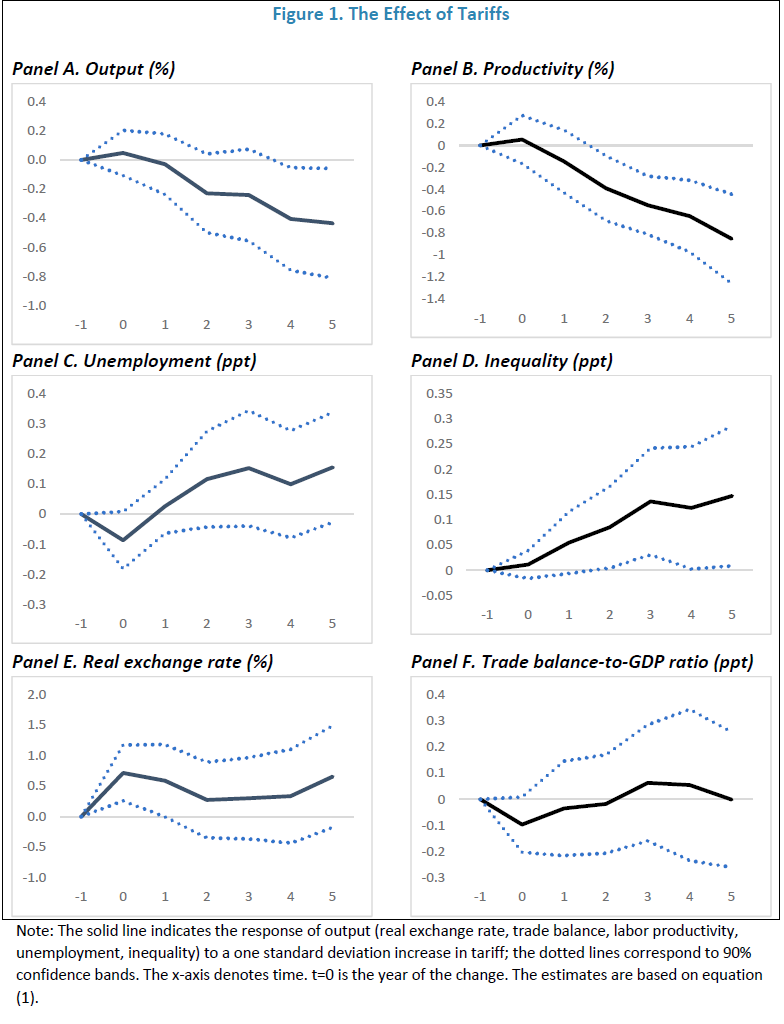 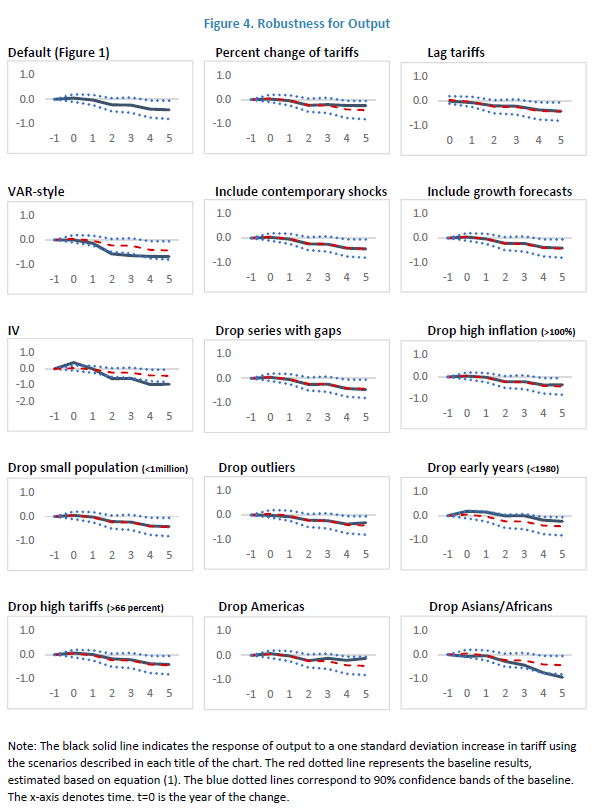 The "drop early years (<1980)" seems to produce a different enough result on output though (in that robustness graph), but I can't find any commentary on that particular check in the paper. I guess it's because it still falls within the 90% confidence region of the base model. The paper does point out in its introduction that older data had more protectionism:

Our panel of annual data is long if unbalanced, covering 1963 through 2014; more recent data is of greater relevance, but older data contains more protectionism. Since little protectionism remains in rich countries, we use a broad span of 151 countries, including 34 advanced and 117 developing countries.

As an US addendum, regarding the Trump economy in particular, Kenny LJ answered another (much broader) question by citing/meniotining Fajgelbaum et al. (March, 2019)

We analyze the impacts of the 2018 trade war on the U.S. economy. We estimate import demand and export supply elasticities using changes in U.S. and retaliatory tariffs over time. Imports from targeted countries declined 31.5% within products, while targeted U.S. exports fell 11.0%. We find complete pass-through of U.S. tariffs to variety-level import prices. Using a general equilibrium framework that matches these elasticities, we compute the aggregate and regional impacts. Annual consumer and producer losses from higher costs of imports were \$68.8 billion (0.37% of GDP). After accounting for higher tariff revenue and gains to domestic producers from higher prices, the aggregate welfare loss was \$7.8 billion (0.04% of GDP). U.S. tariffs favored sectors located in politically competitive counties, but retaliatory tariffs offset the benefits to these counties. We find that tradeable-sector workers in heavily Republican counties were the most negatively affected by the trade war.

So noticeable effect on trade already, but very small on GDP, percentage-wise. Given the IMF/Fuceri model, we don't really expect a large impact on GDP anyway.

Not the answer you're looking for? Browse other questions tagged macroeconomics international-trade economic-growth protectionism or ask your own question.

6
If Trump's economic policies are destructive, why is the US economy so healthy?

7
How did reducing the employment gender gap impact the US economy?
11
Inflation and economic growth
9
Would healthcare costs increase (in the long term) if all smokers quit?
1
Impact on interest rates of massive government spending
2
Is weak global economy always a "headwind"?
1
GDP per capita and trade relationship
0
How will economy find long-term equilibrium in AD-AS model in case of a negative supply shock?
0
Negative long term effects of wage cap, especially on purpose of money?