Why does Denmark have such a huge disparity between its income and wealth Gini coefficients?

(After-transfer) income inequality and wealth inequality are obviously not the same thing, but I would intuitively expect that, all else equal, they would be reasonably well correlated across countries. Looking at the lists of countries ranked by income inequality and by wealth inequality, this appears to be more or less the case - with one glaring exception. As of the year 2000, Denmark's income Gini coefficient of 0.226 was the lowest listed in the OECD, and one of the lowest on the world (third-lowest, although that's as of 2011) - but its wealth Gini coefficient of 0.808 was the third-highest in the world.

Is there something unique about Denmark's economy that explains the gigantic disparity between its income and wealth inequality?

inequality national-income
Share
Improve this question
asked May 20, 2019 at 1:06

The disparity exists because a high income taxes level income inequality but do little to fix wealth inequality.

Wealth inequality is always higher than labor income inequality, due to income originated from wealth (or capital income), such as rents, dividends or royalties and the increase of asset values [6]. This source of income accounts for a large portion of the national income (˜ 20%-35% [11]), hence its substantial effect on wealth inequality. Additionally, though labor income accounts for most of the national income produced in all western economies, only a relatively small fraction of it contributes to accumulating personal wealth due to taxation and spending. [...] 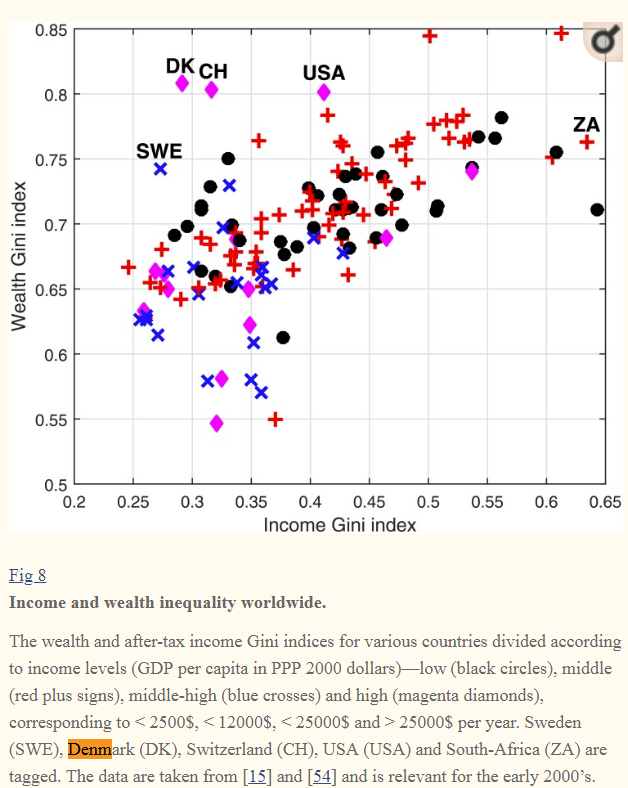 There is an obvious positive correlation between wealth and income inequality. However, it is a characteristic of mainly poor countries. The correlation between the Gini indices for the middle-high and high levels of income is 0.23, while for the low and middle income countries it is 0.68. [...]

Mathematically, increasing the average tax rate reduces the disposable income, hence effectively reduces savings. However, the relatively limited range of average income tax rates makes its effect on wealth inequality relatively low, in practice. Therefore, it can be concluded that progressive income tax is likely to be an impractical measure for affecting wealth distribution, as suggested previously [20, 25, 36, 52]. This non-trivial effect of income on wealth inequality is originated from the imperfect correlation existing between income and wealth [18, 21, 23, 24]. When income tax is increased, the top earners, who are not necessarily the wealthiest individuals in the population, have a larger difficulty of accumulating wealth, with respect to the wealthiest. On the other hand, it barely affects the wealthiest individuals. Therefore, such an increase might even deepen the wealth gap. When decreasing income tax, the opposite effect will therefore occur. In addition, progressive taxation, which might have a significant effect on the distribution of income, will have a small effect on wealth inequality. Therefore, we conclude that affecting income inequality or changing the average income tax in order to effect wealth inequality are likely to be ineffective means. An evidence for this can be found in the economies of Denmark and Sweden, two of the most equal countries in terms of income in the world, with a high tax burden, in which wealth inequality is among the highest within the OECD countries [53].

If I can find out why wealth inequality is so high in Denmark, I'll add more details about that, but the above address why one should not really expect super strong correlation between wealth and income inequality, which I take it to be the main question here.

What I could find out quickly is that wealth inequality in Denmark continued to rise, as of 2015.

The figures revealed that Denmark’s richest 10 percent now own as much as 70 percent of the rest of the population put together – a clear indication the government didn’t need to consider any more reforms aimed at benefiting the wealthiest Danes.

This actually gets even more intriguing because until 1998 Denmark had one of the highest wealth taxes.

There might be an explanation with the data from the graph above, which is from the early 2000's, because pension funds were not included in wealth back then, as calculated by the Danish tax authority:

The Danish wealth data are considered of a very high quality, and they have been fruitfully used to study retirement savings (Chetty et al. 2014), intergenerational wealth mobility (Boserup et al. 2014), and the accuracy of survey responses (Kreiner et al. 2015). The data does have two limitations, however. First, they exclude funded pension wealth before 2012, because such assets were not subject to wealth taxation. [...] Second, there is a break in the data in 1997 when the wealth tax was abolished. After 1997, while the Danish administration continued to collect wealth data from third parties, it stopped asking households to self-report assets not reported by third parties.

I guess this emphasizes why wealth inequality is a lot harder to measure (than income inequality). If "very high quality" wealth data has those kinds of issues...

Figure 1 shows wealth shares in three broad classes: the bottom 50%, the next 40%, and the top 10%. Measured in this way, wealth inequality has been relatively stable in Denmark over the last three decades. Throughout the period, the bottom 50% of the distribution owns a tiny fraction of aggregate wealth: their assets are barely higher than their debts. Therefore, almost all wealth is owned by the richest half of the population, and it is shared about equally between the middle 40% and the top 10%. While the wealth shares in the figure are overall stable, wealth inequality did increase somewhat from the mid 1980s to the early 1990s. During this time, the top 10% wealth share grew while the bottom 50% wealth share shrank. This evolution was driven by the dynamics of asset prices, in particular housing prices, which fell significantly during this period. Because the share of housing in asset portfolios tends to be decreasing in the level of wealth, housing slumps hurt the bottom more than the top, leading to a rise in wealth inequality. 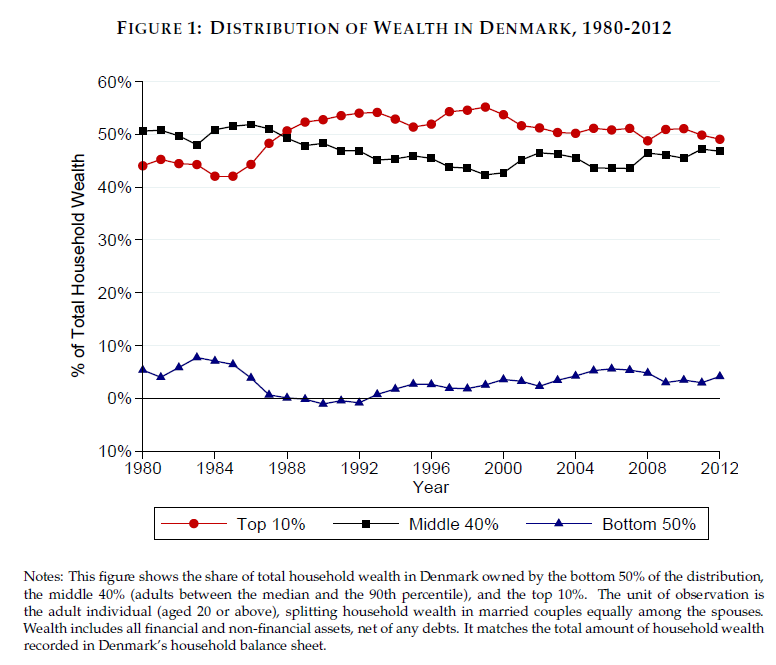 So if you want to know the source of the wealth inequality in Denmark, you have too look further back in history, and unfortunately there's apparently not much good data for that.

The same paper goes on comparing the rise in wealth inequality with the US, and finds that in Denmark it was raising more slowly, especially in the top 1% and top 0.1%. They also find that dropping the wealth taxes didn't change this pattern, however, they attribute this to an "equalizing force":

One important confounding reason why wealth inequality has stabilized in Denmark (despite wealth tax cuts) is likely to be the sharp rise of pension wealth, from around 50% of national income in the late 1980s to 178% in 2014. Because pension wealth is relatively equally distributed, rising pension wealth tends to reduce inequality. As shown by Chetty et al. (2014), automatic employer contributions to retirement accounts increase pension and total wealth substantially for middle-class Danish households.

Denmark has compulsory funded pensions (both public and private) which contributes greatly to savings (and thus wealth) among those with jobs. It also has an extensive public welfare system funded by extremely high tax rates, which tends to equalize income levels. So, to put it succinctly: Denmark has a public policy of taxing high earners in order to subsidize those at the lower end, while public and private pensions (which tend to be much larger than in other developed nations) are of primary benefit to the high earners.

Not the answer you're looking for? Browse other questions tagged inequality national-income or ask your own question.

0
Gini coefficients and median / mean income ratio
0
Income/Wealth Inequality; Why does it matter?