bonding curves and the market

This question is related to economics on the blockchain. Bonding curves are becoming popular; however, it is a bit concerning that the price on an asset is predetermined by a mathematical function. Will the use of bonding curves distort or somehow disrupt the market? In my opinion bonding curves are the wrong mechanism to use in a market economy.

Suppose the real value of an asset is significantly smaller than the sell curve. The sell curve allows me to sell only at a specified price (the price that corresponds to the current volume of issued tokens). How is this mechanism market efficient? It seems that this mechanism will work for curation markets, but it will not work as an automated market maker for assets similar to equity securities. Please, correct me if I'm wrong. 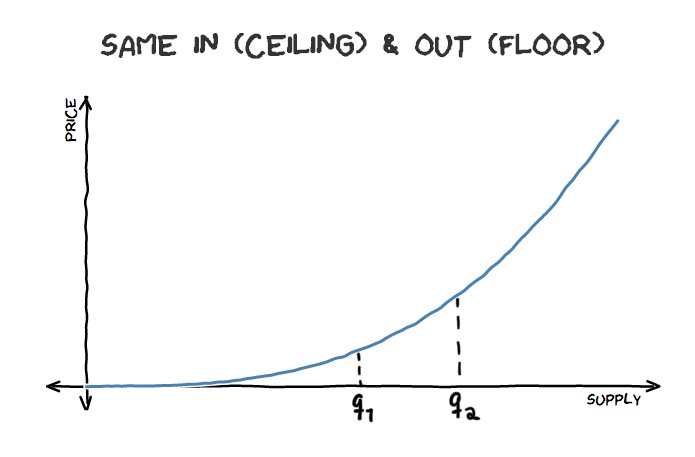 At any point you can buy a token and sell it back and get your money. However, if you buy at $q_1$, wait and more people buy (not guaranteed!) then you can sell at a higher price at $q_2$. To make profit, you should only buy if you think others will buy after you as well.

Now, sometimes the sell curve is below the buy curve: 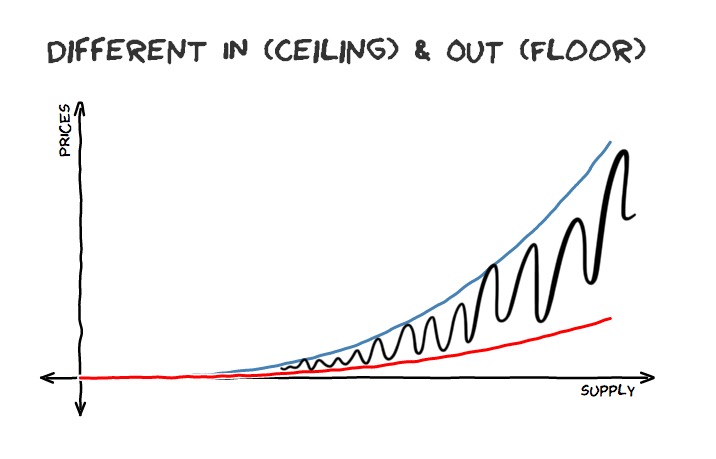 In this case, the area between the buy and sell curve is revenue that will typically go to a company. There is money making opportunities, but because the sell curve grows slowly, it only really benefits the earliest buyers.

So what are these any good for?

This kind of market is good for content curation. It’s easiest explained by an example (borrowed from https://medium.com/@simondlr/tokens-2-0-curved-token-bonding-in-curation-markets-1764a2e0bee5):

Meme Factory: A Game of Curation & The Trading of Dank Memes Meme Factory from District0x will be a game where users can create dank memes and bond tokens to each meme according to its own bonding curve. This becomes a game where users then bet on the popularity of each meme. Bonded early to a dank meme and got out at the top? You successfully traded a dank meme and just made a profit.

The question each time is: do you think this meme is dank and funny enough that others will want to bet after you on this too?

Ultimately, whilst this game is being played, these memes are also being curated themselves: more tokens bonded to a meme is a signal that is a funnier meme than a meme with fewer bonded tokens. This is an emergent outcome.

By people trying to make money, they will curate popular content as a byproduct (social surplus from private motives!)

It’s very hard to start a community because the first members don’t have many people to interact with and it’s very laborious to create stuff that other people will want to join and see. It’s especially hard if you have to pay to join!

However, notice that if you enter early the sell curve is super close to the buy curve, so you have low risk of joining a community (because you can sell right back). And the upside is, if you work on the community to gather members and create fun content then more people will pay to enter. All of a sudden your share is worth a lot! This incentivized people to value their community and make money while doing so.

Not the answer you're looking for? Browse other questions tagged markets cryptocurrency or ask your own question.

9
Financial Smart Contract on Ethereum: can an Ether Futures contract be priced in Ether?
4
Why is the Market-Clearing Price also an Equilibrium Price?
1
Reductionism, value and market economics
1
Crypto-tokens: how do they function in a latter stage of company?
0
What is the name for a market where everyone is basically selling the same thing?
2
What are the assumptions behind calculating the market equilibrium from supply and demand curves?
0
When do the curves touch the axes and when don't they?