In Microeconomic Theory (3rd Edition), Mas-Collel, Whinston and Green state that the property of free disposal implies the following: 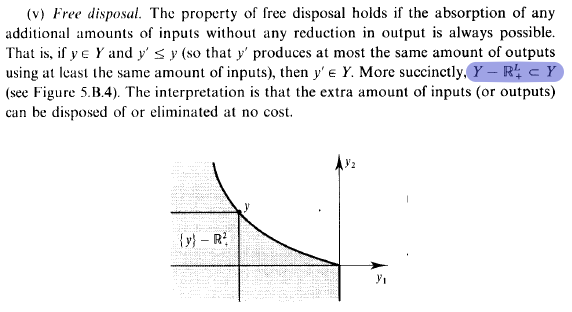 Why does this formula means that the extra amount of inputs or outputs can be disposed of or eliminated at no cost?

So the way that $Y$ is defined is such that negative values are inputs and positive values are outputs. For example, if I used 3 units of labor, and 2 of capital to produce 10 pencils, that will be reflected as a single vector in $\mathbb{R}^3$ equal to $[-3;-2;10]\in Y$.

Notice that subtracting 1 unit to either the first or the second element of that vector will mean that I used more inputs to produce the same output, for example, $[-3;-3;-10]$. Similarly, if I subtract one unit to the third element, it would mean that I produced less output with the same inputs. For example $[-3;-2;9]$.

Therefore you can conclude that a production set, $Y$, satisfies free disposal if and only if $Y-\mathbb{R}^L_+\subset Y$.

3
Why is the production possibility set convex?
3
Production set is closed and non-empty?
1
Pure exchange economy with free and non-free disposal
1
Conditions for Radner Equilibrium
3
Set Theory Properties of the Budget Constraint
3
What is the definition of: 'commodity space'?
2
What does the following mean: "supply has positive elasticity”?
1
Production Set: Not satisfying Free Disposal Assumption