Did real interest rates decrease during the Great Recession 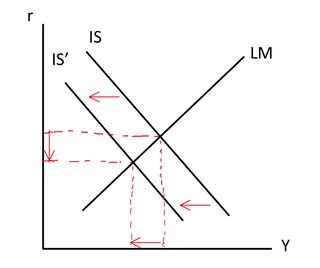 But this indicates that real interest rates would have fallen. Given that there was a liquidity crisis at the onset of the recession, I am guessing this did not happen. Did it? And if not, how could a liquidity crisis be accounted for in the IS-LM model?

The Great Recession precipitated in the financial sector, as a liquidity crisis, as I'm sure you know. It didn't precipitate in the real sector. I would represent that in the theoretical framework as a decrease in the stock of money: 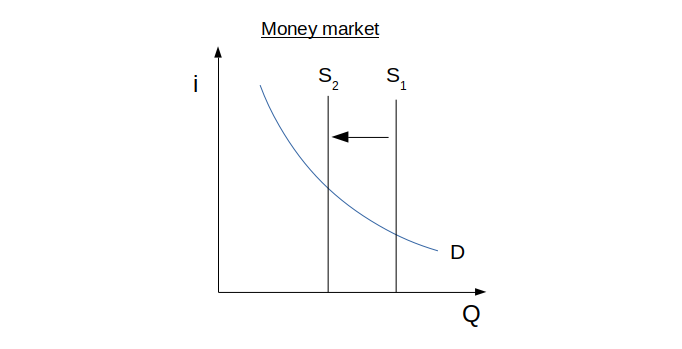 That is because there was a lack of liquidity. The evidence is that interest rates soared. That is, the inter-bank lending rate soared, along with the increase in the perceived riskiness of financial instruments. The above shift correlates to a leftward shift of the LM curve.

The constraint on credit had real effects—a recession. The traditional way to smooth a recession is through monetary policy, but the Fed reached the lower limit when lowering the federal funds rate—a so-called "liquidity trap". So further, non-traditional methods were needed to address the recession (such as quantitative easing, where risky securities were purchased by the Fed in an attempt to lower those interest rates, and they also sought to lower forward interest rates).

Not the answer you're looking for? Browse other questions tagged investment consumption or ask your own question.

5
Relationship between Real Interest Rate and Employment
0
Why the GDP does not decrease even when we are saving from our income?
1
What affects the interest elasticity of investment?
1
Why does capital initially reduce and then rise with an anticipated future decrease in taxes in the RCK model?
2
Bank Runs During the 1930s
0
Why does the aggregate consumer spending decrease due to to lower expected future disposable income instead of MPC?
1
What does it mean, 'Higher interest rates attract FIIs and FPIs'?