I've been reading about prospect theory lately and have read often that prospect theory predicts people will be risk averse in gains and risk seeking in losses. This statement is typically supplemented with the phrase ", contrary to the standard expected utility theory model".

However, I'm not sure how expected utility theory deals with losses. Is it that EU theory assumes people who are risk averse in gains will be risk averse in losses as well? If so, how do you model this mathematically?

If our risk-averse EU maximizer has $u(x)=\sqrt{x}$ for $x>=0$, would the equivalent function in losses be $u(x) = -x^2$ for $x<0$? If so, wouldn't that mean that they are overweighting the loss component relative to the gain component - which is not an element of expected utility theory.

Graphically, a prospect theory value function is typically drawn as 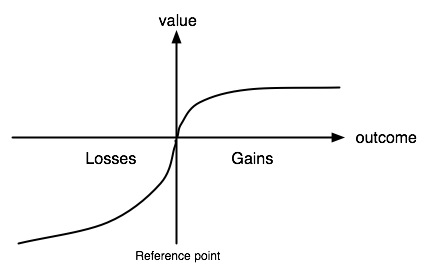 How would you draw the equivalent graph for an expected utility theory value function?

Gains and losses presuppose a reference point, which is not a feature in standard expected utility theory. In this theory, the only argument in the utility over wealth is $w$, the absolute level of wealth. A common form of utility function is the constant relative risk aversion (CRRA) form: \begin{equation} u(w)=\frac{w^{1-\rho}}{1-\rho}, \end{equation} where $\rho$ is the coefficient of relative risk aversion. Note that this incorporates the commonly seen $\sqrt w$ and $\ln w$ forms when $\rho$ is $\frac12$ and $1$, respectively. As is obvious, there is no term that helps differentiate between gains and losses in this formulation. The graph for a standard EU function with risk aversion is the same as any strictly increasing and strictly concave function.

Prospect theory is motivated by empirical regularities found in psychology experiments. A typical utility form is \begin{equation} u(x,r)= \begin{cases} (x-r)^\alpha &\text{if }x\ge r\\ -\lambda(r-x)^\beta &\text{if }x<r \end{cases} \end{equation} where $x$ is the payoff from some choice alternative (or "prospect" if the choice involves risks), $r$ is the reference point (which is $0$ in your example), $\alpha,\beta\in(0,1)$ are parameters that govern the degree of risk preference, and $\lambda$ is a parameter that separately captures loss aversion. Tversky and Kahneman (1992) estimate that $\alpha=\beta=0.88$ and $\lambda=2.25$.

Not the answer you're looking for? Browse other questions tagged microeconomics expected-utility theory or ask your own question.