Does stock picking work? Why/why not? What does the research say about it?

In general, stock picking does not work.

For more information, see this keynote address by Daniel Kahneman, who found that stock-pickers perform worse than chance when they change stocks: https://forum.amundi.com/the-psychology-of-investors-the-cost-of-ideas/

Here is another reference on the subject:

Is expertise portable across closely related domains? We investigate this question empirically using a unique dataset of market experts---institutional investors with portfolios averaging $573 million. A striking finding emerges: while there is clear evidence of skill in buying, the investors' selling decisions underperform substantially--even relative to random selling strategies. This holds despite the similarity between the two decisions in frequency, substance and consequences for portfolio performance. We present evidence that an asymmetric allocation of cognitive resources such as attention can explain the discrepancy: investors are prone to a systematic, costly heuristic process when selling but not when buying.

This question probably needs the obligatory Efficient Market Hypothesis answer to complement the great answer by Angela Richardson. Broadly, speaking, the EMH reasoning goes like this:

Suppose that there was a way—any way—for you to figure out that a stock's price is too low and that the price will be higher tomorrow. They you could make a profit by buying the stock today and waiting until tomorrow to sell.

But whatever data and method you used to figure that out is also available to everyone else, so they will figure it out too. After all, they've got billions of dollars at stake! And because they also know the price will increase, they too will go out and buy the stock right now. But all of their buying activity creates extra demand for the stock which, by the normal principles of supply and demand, causes the price to increase today—earlier than forecast. You can replace "today" and "tomorrow" in this example with "now" and "one millisecond from now" if you want. So any method to predict the future price movement of a stock is self-defeating because all of the publicly available information is immediately incorporated into the stock's price as soon as people try to act on that information.

The theory is obviously quite stylized and shouldn't be take too literally. But the basic idea is helpful: there are people with lots of money at stake, which gives them an incentive to react quickly to any new information, closing the window of opportunity to profit from that information. You can see this work in practice by looking at what happens to a stock price when a news story breaks about a firm. Usually, if the news wasn't previously anticipated, you can see the stock price react to the news in seconds or fractions of second. For example, if we look at Twitter's stock price we can pinpoint the exact second that the news of Dick Costello's resignation as CEO hit the wires: 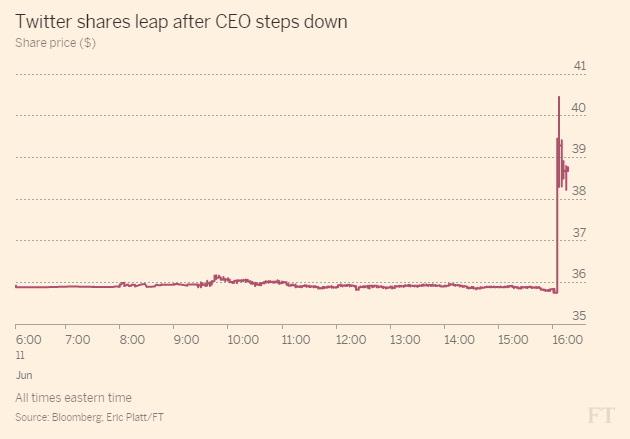 There are companies that invest billions of dollars relocating their servers one or two feet closer to the exchange's master server because the shorter cable run shaves a nanosecond off of their trading time. So unless you have truly private information (which would probably make it illegal for you to trade the stock—so-called insider dealing), it's going to be difficult or impossible for you or anyone else to systematically "beat the market" by picking stocks.

I think this Quora discussion on the fund manager illusion of validity told most of the story. As one commenter has pointed out the flaw of typical fund manager attempt to use Berhshire Hathaway to cover them, however, as pointed out:

Berkshire is very far from a traditional fund. Look back on how they made their returns through the years. They’ve scooped up companies at rock-bottom prices and guided operators in turning them around, and they’ve used leverage and reinvested the float they’ve accumulated from their insurance businesses to multiply their returns. These are not typical strategies available to, or used by, the typical mutual fund manager.

This is why veteran investor recommended index fund / ETF , which is resilient to speculation volatility. The catch is, stock like Bershire hathaway, or index fund/index ETF usually seems quite expensive to retail investors.

We find that funds hold stocks that outperform the market by 1.3 percent per year, but their net returns underperform by one percent.

Not the answer you're looking for? Browse other questions tagged stock-market investment or ask your own question.

9
Why do falling oil prices take stocks with it?
1
Statistical tests/models to use for Macroeconomic and Financial Research
16
When a stock market crashes, how does money just disappear?
4
Why does the stock market tend to grow over time
0
How does the stock market correlate with the economy?
3
Can stock exchange workers go on strike?
1
How much real value has the stock market lost since Feb. 2020?
0
How is the cost of equity for a specific stock calculated using the Fama-French 5 factor model?
2
If North American stock markets are semi-strong efficient, why are indices like S&P500 expected to grow?