Why did the EUR/USD go down immediately when the Fed cut interest rate?

The probability of 50 bps cut was non-zero: 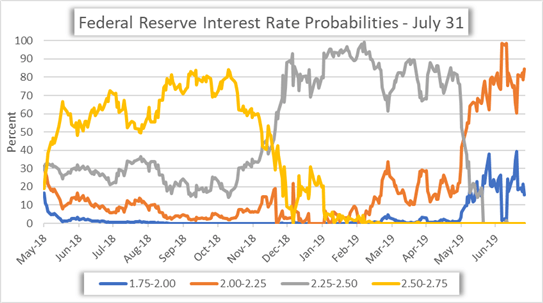 In addition, the Fed's statement afterwards is seen as "hawkish" in the sense that the forward guidance doesn't say the Fed will continually cut the rate. https://www.dailymaverick.co.za/article/2019-08-01-dollar-bears-and-trump-both-dealt-blows-by-feds-hawkish-cut/

One possibility is that although market participants had generally expected a 25-basis-point cut, they had also assigned a small probability to a bigger 50-basis-point cut.

And so, when it was confirmed that the cut would be 25 rather than 50 points, market participants then reacted accordingly to this (mild) surprise by strengthening the USD.

Edit: Actually, a bigger factor may have been the Fed's failure to promise more stimulus/rate cuts in the coming months (as some/many may have hoped).

Stock markets sold off and the dollar strengthened Wednesday afternoon after Fed Chairman Jerome Powell disappointed investors in his post-decision news conference when he didn’t more explicitly ratify expectations of additional stimulus in the months ahead.

Not the answer you're looking for? Browse other questions tagged interest-rate federal-reserve or ask your own question.