In Microeconomic theory, the budget constraint is defined by 4 distinct properties: It is

The 1. 2. and 4. are very straight forward and the benefits in terms of analysis are apparent. My question is with respect to convexity.

My question is, what is the benefit or added utility to this property holding? I immediately think of a budget constraint that, rather than exhibiting diminishing marginal returns, exhibits increases returns in a kind of learning sense: As more of one good is produced, the production becomes more efficient as the producer is learning. Whether or not this is a realistic circumstance, it begs the question.

What happens if convexity is violated? or rather, what can we no longer do?

Convexity can be a very important assumption as much of economic analysis is built on working with convex sets, which makes things easier.

Very importantly, convexity of sets allows us to work with the Separating Hyperplane and Supporting Hyperplane theorems, which have applications to many results in economics, as partially discussed here and here.

Here is also a short, concrete example of something for which we need convexity of the budget set:

Suppose you want to prove that Marshallian Demand $x(p,m)$ is single-valued for every (larger than zero) price ($p$) and (non-negative) income ($m$) combination. That is to say, a Marshallian Demand Function exists, since without single-valuedness we would have a Marshallian Demand Correspondence (i.e. we'd have multiple good combinations as part of the optimal demand choice for a single given price and income level), which can be harder to work with. This is a pretty nice result that we (almost) always work with in undergraduate texts. For that you need strictly convex preferences and a convex budget set $B(p,m)$. The proof is as follows:

As a side note, I think it is a bit misleading to talk about producers in your post when talking about budget constraints. If we are looking at a budget constraint, we should be discussing consumers.

Without convexity, we'd lose the convenience of using the first order condition (or the tangency condition) to identify the optimal consumption bundle.

As shown in the following figure, where the red-shaded region is a non-convex budget set, the tangency at point $E$ is not the optimal consumption point; rather, the optimum is a corner solution, where only $x$ is consumed. 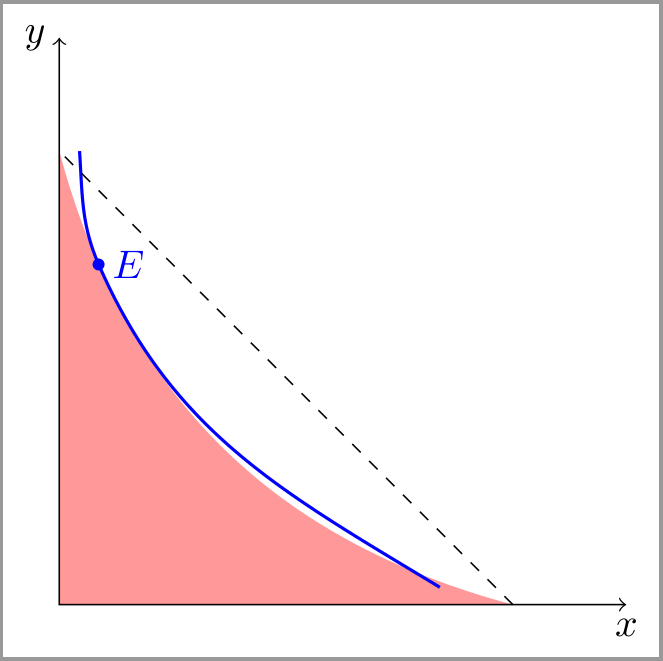 Not the answer you're looking for? Browse other questions tagged microeconomics mathematical-economics consumer-theory or ask your own question.