Correlation between salary level and housing prices in a town

Is there a measurable correlation in a town between salary level and housing prices?

Or, to put it differently: is it politically meaningful to drive up salaries by new investments if the result is unaffordable housing?

UPDATE: I do not want to edit the original question as others wrote their reply with that in mind, but it is right to suggest that it would have been better to ask about causality, not correlation.

The graph below plots average house prices against average incomes for various US cities. The relationship is strong in the cross-section, especially if you ignore Honolulu. 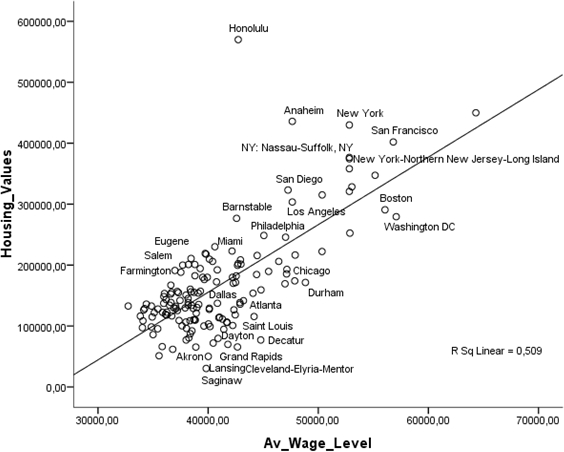 Is it also true dynamically, that is, are changes in income associated with changes in house prices (not just levels)? Van Nieuwerburgh and Weill (2010) say yes:

We set up and solve a spatial, dynamic equilibrium model of the housing market based on two main assumptions: households with heterogenous abilities flow in and out metropolitan areas in response to local wage shocks, and the housing supply cannot adjust instantly because of regulatory constraints. In our equilibrium, house prices compensate for cross-sectional productivity differences. We increase productivity dispersion in the calibrated model in order to match the 30-year increase in cross-sectional wage dispersion that we document based on metropolitan-level data. We show that the model quantitatively matches the observed 30-year increase in dispersion of house prices across US metropolitan areas. It is consistent with several other features of the cross-sectional distribution of house prices and wages.

Why Has House Price Dispersion Gone Up?

Assuming a fixed housing stock, it's not hard to show that an increase in salaries drives up rents enough to make renters worse off if and only if housing is a Giffen good.

Higher salaries in a specific place will drive people to relocate there for better opportunities, thus creating demographic pressure.

As the housing stock usually takes a long time to increase, the offer in housing will have trouble adjusting to an increasing demand, thus driving prices higher and higher.

The causality also works the other way: as a result of increased housing cost, people with lower salary might become unable to afford a home and will be obliged to relocate to a place where real estate has a lower market value.

"is it politically meaningful to drive up salaries by new investments if the result is unaffordable housing?"

This is a very different thing from "is there a correlation", and I think what you're asking is: what's the use of investing in an area if that will only drive up salaries and thus housing cost?

The answer is YES it is definitely meaningful (politically or otherwise) to make new investments in an area that will (through market forces) drive up salaries. Driving up salaries will not drive up the cost of housing for a given level of quality unless housing development is artificially curtailed by government actions (which is very common). As salaries rise, over time higher-quality housing options will become available and will push up the average price of housing as a result, but the minimum price of housing on the market will not increase as long as housing development is allowed to keep up with population growth.

I would conjecture that the correlation you see in BKay's answer is due to higher-salaried people demanding higher-quality housing, and that the weakness of that correlation is due to differences in how difficult cities make it to build new housing.

Not the answer you're looking for? Browse other questions tagged housing or ask your own question.

5
The Effect of Two income Households on Housing Prices
3
Episodes of Housing Crashes and Never Recovering
17
Has an increase in housing supply in popular cities including Amsterdam led to an increase in house prices?
14
Economics of Homelessness: Are housing prices to blame?
4
Papers on Game Theory and the Housing Market