LM curve: How interest rate is changing without OMOs by the central bank?

The following is the gist from chapters - 3, 4 & 5 dealing with IS-LM model from Macroeconomics, Blanchard & Johnson, 6th edition.

Equilibrium in the financial market implies an increase in income leads to an increase in the interest rate, therefore the LM curve is upward sloping. The LM curve is derived at a given level of (real) money supply. It is further assumed that price level is fixed in the short run. further, it is assumed that central bank changes money supply through open market operations (OMOs). When the central bank buys bonds, bond prices goes up & interest rate goes down. Conversely, when the central bank sells bonds, bond prices goes down and interest rate goes up. Hence interest rate is directly dependent on the OMOs.

What I could not understand is why the interest rate is changing because of change in income, since there is no change in money supply and hence no OMO is going on?

Also, why would someone will buy the bond from central bank when the bond prices are going down?

Edit: (related to fixed money supply, first question) Since there is no interest rate on check-able deposits and bank money apart from reserves are used to purchase bonds, not for lending, people to people borrowing is an option. However, it does not seem to be a plausible due to the following reasons. The Money demand shift to right for an increase in income and intersects the Money supply curve at a higher point leading to increase in interest rate. Increase in income will suppress the people to people borrowing, leading to opposite of the required result, lower interest.

(related to variable money supply, second question) consumers who have already invested may hold on their bonds but may not purchase new bonds with the extra income. So the interest rate should not change. Moreover, if consumers buy and sell bonds among themselves without Central Bank Intervention and make major changes in the interest rate, they may not cooperate. e.g. CB decides to decrease money supply but consumers may not give up thier bonds as their income may have increase recently.

Hence interest rate is directly dependent on the OMOs.

The next year Buyer has magically regained all 10 credits. Maybe Buyer stole them from Producer; it doesn't matter. Producer produces 20 tomatoes. Hence, real GDP is now 20 credits. Intuitively tomato prices should go down as there is more supply and a fixed demand (from Buyer) but that would imply that real money supply has gone down. So to better illustrate the LM curve, let us assume that Producer keeps prices at 1 credit per tomato. Buyer now purchases 10 tomatoes, and has no credits left. But Buyer is determined to consume everything possible, so Buyer strikes a deal with Producer to borrow the 10 credits that now Producer owns at 10% interest. Buyer then purchases 10 more tomatoes.

In short, real GDP doubled, real money supply stayed the same, and interest rates went up from 0% (no one borrowing) to 10%.

Also, why would someone will buy the bond from central bank when the bond prices are going down?

Central banks will sometimes sell bonds that they have purchased previously to decrease the money supply. The announcement that a central bank will attempt to do so may attract front-running speculators. In other words, basic market dynamics will apply: if no one wants to purchase bonds, then prices will decline until someone believes prices have declined enough that they will eventually start rising again even under pressure from the central bank.

The LM-curve is drawn for a given real money supply, a change in the money supply will shift the curve.

Maybe it helps to look at the equation that is depicted as the LM-curve:

LM:$$L(Y,i)=\frac{\overline{M}}{\overline{P}}$$ Where $L(\cdot)$ is real money demand, $Y$ is national income, $i$ is the interest rate, and $M$ and $P$ are money supply and price level respectively. I have placed a bar on top of $M$ and $P$ to indicate that these are fixed. The LM-curve then is the collection of all the $(Y,i)$ pairs for which this equation holds, keeping $M$ and $P$ constant.

The interpretation of this curve is straightforward, since the left side of the equation gives real money demand and the right side gives real money supply. The LM-curve then, is a locus consisting of all the pairs of $Y$ and $i$ that equilibrate the money market.

Now let's look at the graph: 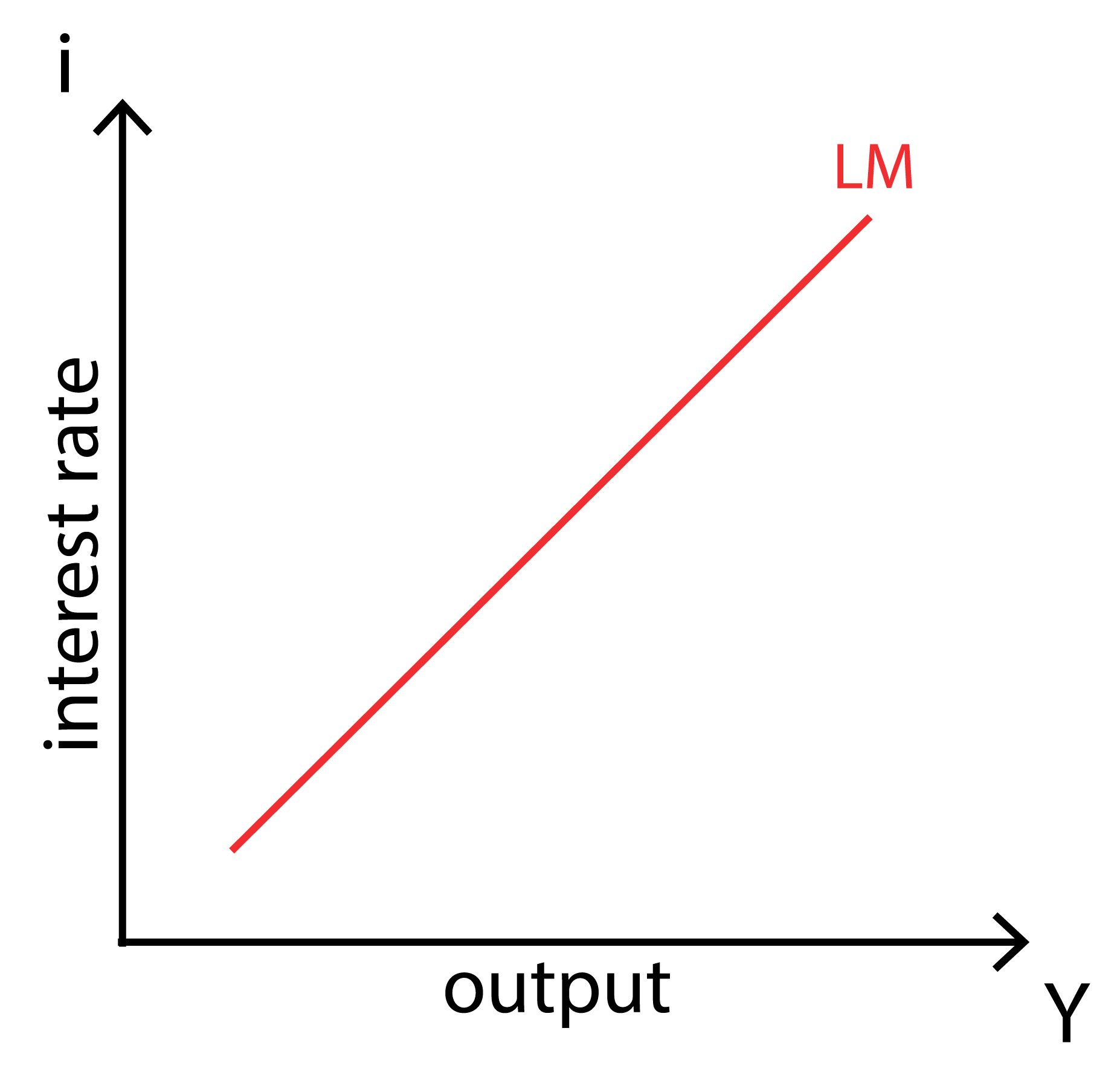 Now we are ready to answer your question:

What I could not understand is why the interest rate is changing because of change in income, since there is no change in money supply and hence no OMO is going on?

Now remember the graph is a collection of $(Y,i)$ pairs that equalize real money demand and supply. As we see, the curve is upward sloping. Why is this? With a higher income $Y$ people will, all else equal, want to spend more money on goods and services. For this they need money in their pocket. To ensure having the money in their pocket needed to buy stuff, they lend out less for a given interest rate. This however (increased real money demand and fixed real money supply) leads to people wanting to lend out less money than people want to borrow: there is excess demand for money. Thus the price of borrowing money increases, and this price is, you guessed it, the interest rate $i$. It increases until demand again equals supply.

Thus we have derived a positive relationship between interest rates and national income, while money supply remains fixed: the LM-curve.

Now suppose the central bank conducts open market operations. Specifically, suppose they buy bonds from the public, thus increasing the money supply: $M \uparrow $. Since the price level is fixed, the real money supply increases as well: $(\frac{M}{\overline{P}}) \uparrow$. The result is a lower interest rate for a given national income: a downward shift of the LM-curve. The story behind this is that at every $(Y,i)$ pair on the 'old' LM-curve real money demand was equal to the 'old' real money supply, which is lower than the 'new' real money supply. So to let real money demand increase to the needed level, we need either higher national income ($Y \uparrow$), a lower interest rate ($i \downarrow$), or both.

The interest rate is nothing but the equilibrium of money demand and money supply. Your questions can be answered when you think in terms of this equilibrium.

What I could not understand is why the interest rate is changing because of the change in income?

Suppose your income increases from \$100 a week to \$200 a week. This is nothing but increase in money demand by \$100 because in the first place your income has been measured in money. Secondly, higher-income would lead to higher expenditure that is higher transactions again money demand increases.

Now bring in the concept of equilibrium. When money demand increases the price of money which is the interest rate should increase therefore you have a higher interest rate.

When Central Bank sells bonds in the open market it tends to decrease the money supply in the economy. When supply goes down, the price of money which is nothing but the interest rate rises thereby decreasing the bond prices.

Also, why would someone buy the bond from the central bank when the bond prices are going down?

Not the answer you're looking for? Browse other questions tagged macroeconomics interest-rate money-supply or ask your own question.