Is there a way to adjust trade data between China and EU member countries for the Rotterdam effect?

Basically Eurostat trade data for individual EU member countries with China seems to have some substantial artefacts probably because most EU imports from China arrive in Dutch ports, even though their ultimate destination is probably all over the EU. It's hard to explain otherwise the huge figure for Dutch imports (and thus trade balance) from/with China relative to Dutch population, economy, etc. 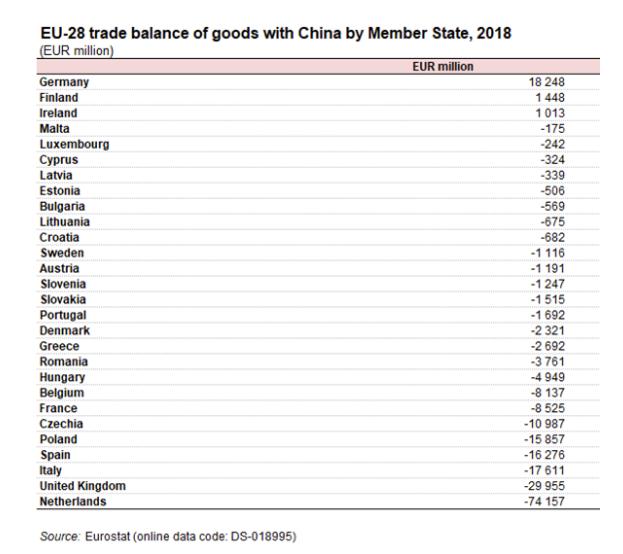 Are there any data sources or papers that try to adjust for this Rotterdam effect, i.e. figure out where those Chinese imports are really headed in the EU (and adjust the trade figures per member country accordingly)?

(Thanks to Henry for pointing out the right term.) Eurostat actually acknowledges the issue in a FAQ, but does not try to quantify it:

This seems relevant: China and the Dutch Economy

I have only a limited experience in this, but here are some approaches you could look at.

UN Comtrade has re-exports data (products that the Netherlands import and export in the same form to other countries). Using this, you could make an assumption that x% of goods imported from China are re-exported to the EU. Assuming that this share of re-export actual source countries are the same for Dutch exports to the EU, you could get a rough estimate of how much goods from China goes to each EU country.

Using aggregate data, this could be a very far-off estimate. Belgium could import a lot from Netherlands, but all it imports are tulip flowers. To account for this, you can look at this on a HS-code level and you should get a reasonable estimate.

Another approach is to look at the TiVA (trade in value-added) concept. This should tell you each country's value-added into an import of a country. OECD has this data, but I don't believe it covers all EU-28. Here's a link.

Not the answer you're looking for? Browse other questions tagged international-trade european-union or ask your own question.

0
What is the difference between a free trade agreement and a preferential trade agreement?
2
Why do rich and poor countries trade in different goods and why do rich countries trade in similar goods with other rich countries?
3
Difference between merchandise trade and trade in goods?
1
Relationship between trade deficit and borrowing
1
Trade in services between the US and China
0
How can I control for trade between UK and Australia in my difference-in-difference trade model?
1
connection between foreign assets and trade surplus / deficits