Running a regression to avoid multicollinearity

I have the following regression (pooled OLS; panel data):

Y is a continuous variable, “Treated” is a count variable between 1 and 10, which does not change within the years. “Shock” is equal to 1 if year>1995 and zero otherwise. “ShockTreated” is multiplication of ShockTreated. Below I provide you with the example of how data looks like for 1 firm: 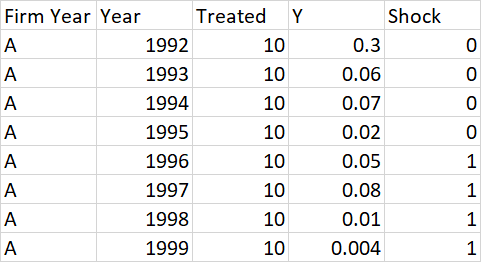 Shock should be shifting your intercept. If you are doing a dummy for shock you would have one line when shock is zero and one where it is 1. Either case your slope remains same but only y-intercept changes. Could you edit the question to reflect what your end goal is?

Not the answer you're looking for? Browse other questions tagged econometrics regression statistics or ask your own question.