The consumer would get an hourly wage of $w$ and the price of consumption is normalized to $1$. In addition to her wage income the consumer also receives a non labor income equal to $y$. So I want to know how can I write the utility maximization problem for this consumer and how can I solve this problem, I can't plot this function eather.

This is quite a loaded question you asked here. I answered it in a few parts: first I introduce you to the idea of Robinson's economy, then I add a company to the equation (as you also asked about the wages $w$). I am about to show you how to write this problem (and how to solve it) from consumer's alone, and then from both, firm's and consumer's points of view. It would be cooler if you had a production function given explicitly but it is still interesting.

So, it looks like a Robinson Crusoe's economy (the guy was stranded on an island, so he is an economy unto himself): Robinson has preferences over consumption and leisure and can produce consumption goods by using labor (and capital but you did not mention it so we can skip it).

In order to get how Crusoe makes optimal choice for labor, leisure, and consumption, we will examine both, production side and his preferences. I assume your hours ($h$) is hours a day he worked, so it is his labor.

So again, usually we say that Crusoe uses the factors of production in order to produce output $y$. In your example, we have only one factor of production - that is?

We will also omit the rate of technology change $A$ as you did not mention it in your question. Therefore, the production function only by $y=f(h)$. The typical assumptions people make are that $f$ is increasing in labor, so that the more you work, the more output you will produce and that $f(0)=0$, so when you do not work at all, there is no output at all. You probably are also aware that the marginal product of labor is the additional output that results from increasing labor. And just as a reminder - $MPL = \frac{dy}{dh}=f'(h)$, hence the marginal product of labor is actually the slope of the production function.

Crusoe (just as you and me) likes to have some free time and consume things, so he cares about his consumption $c$􏰊 and his leisure $24-h$. You have represented his preferences with a utility function 􏰑$u(c,h􏰄)$ but $h$ is the time he spends on working and he does not like it that much. He prefers leisure over labor, or so we assume. The reason why I am mentioning it is to show you that Robinson actually cares about maximizing his leisure time $24-h$! Here come the usual assumptions about the preferences, they increase with his consumption and leisure time and are convex. We are having easier job, as his utility function was given to us: $u(c,h) = c + \sqrt{24-h}$ BUT when you draw them you can see that they are in fact increasing when you move along the curve to the right (they are increasing with labor $h$). This is the part where it gets tricky - if you drew them with leisure $24-h$ on the horizontal axis, you'd get the proper utility function as you have probably seen before (or can see under "quasi-linear preferences" here: Identifying utility function ). 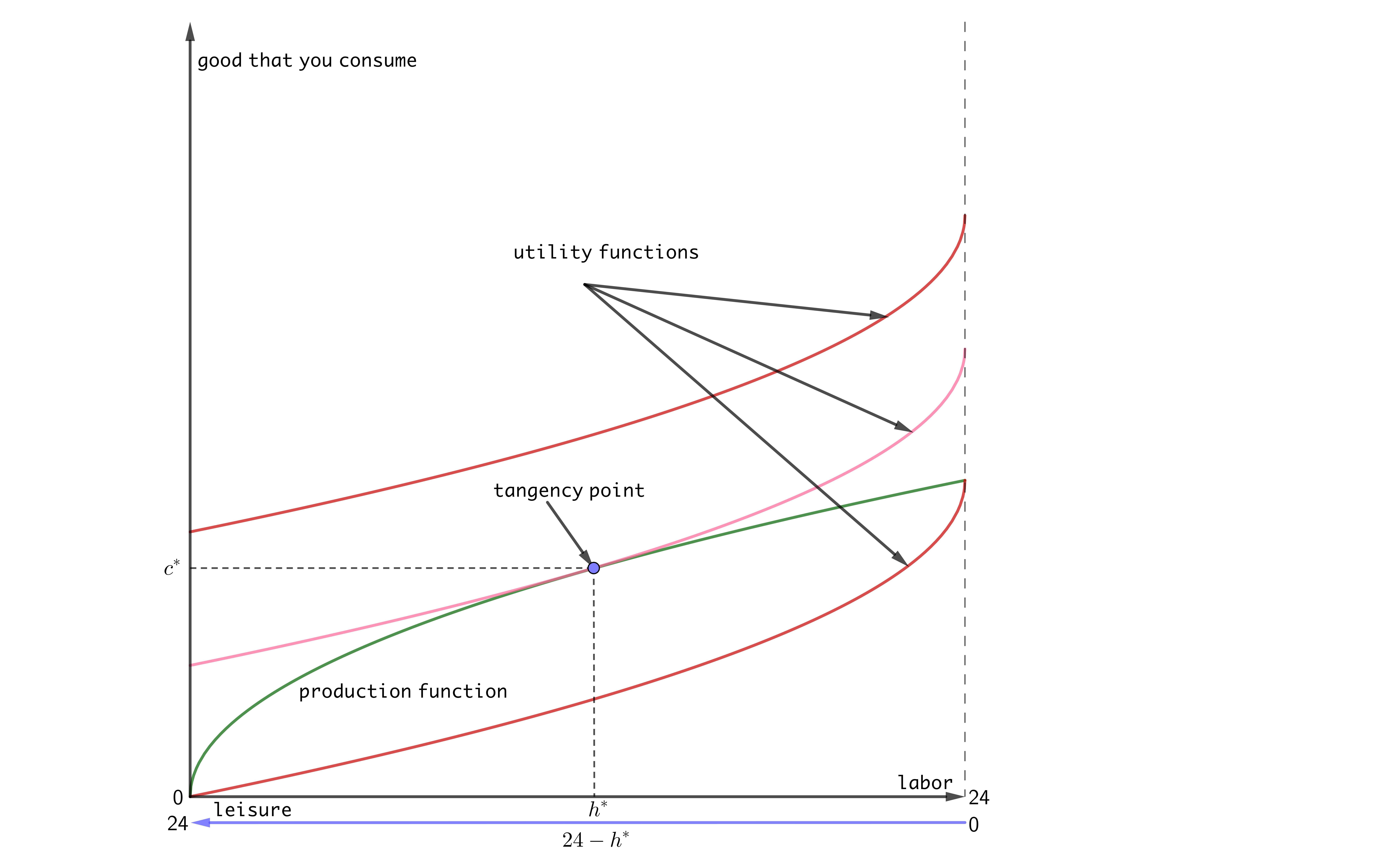 When we put everything together, we get that the problem is actually something like that: $$\max_{c,h} u(c,h) \;\; \mathrm{s.t.} \;\; c \leq y \;\; \mathrm{and} \;\; y=f(h)$$ This basically means that: Robinson is trying to maximize his utility choosing the level of consumption $c$ and labor $h$, Robinson cannot consume more than he produces and the very last bit is the production technology he is in possession of. Now, remember that we assume that Robinson is utility maximizer. What does that imply?

Now we claim that Robinson on an island owns a company which has only one employee - Robinson himself! and that all the profit the company makes goes to one and only - Robinson! As you mentioned, we normalize the price of the good to $1$ so that it becomes the only medium of exchange in this funny looking economy. Let us assume that the output produced by the Crusoe Inc. is given by $y$ (but we already know that $y=f(h)=c$). Hence, the profit the firm makes is given by: $\pi = c - wh$, so that the equation of isoprofit line is given by $c=\pi + wh$.

Given $\pi^*$ the consumer wishes to maximize his utility. His budget constraint is given by $c = \pi^* + wh$. Note that the budget constraint slope is also $w$! The slope of utility function for utility to be maximized must therefore be equal to the slope of budget constraint, hence $MRS=w$. To see it mathematically, we solve $$\max_{c,h} u(c,h)$$ given the constraint. We substitute $c = \pi^* + wh$ to the problem and get $$\max_{h} u(h) = \pi^* +wh + \sqrt{24-h}$$ Then you take the first order condition and should get the utility maximizing labor supply and consumption demand.

Utility maximization problem in the question is:

We can rewrite the above problem as:

Taking the derivative of the objective with respect to $h$, we get labor supply as :

Not the answer you're looking for? Browse other questions tagged utility profit-maximization labor-cost or ask your own question.

3
Intertemporal utility maximization through consumption
3
Profit maximization under uncertainity
0
Why do we have to normalize the income of consumers when working with an Edgeworth Box in a simple trade model with Pareto optima?
4
Price-consumption curve