If Americans drive more and consume more oil, why are cars less efficient?

According to this figure from the Center for Climate and Energy Solutions, US, Canada, or Australia car fuel efficiencies are considerably lower than those for Europe or Japan: 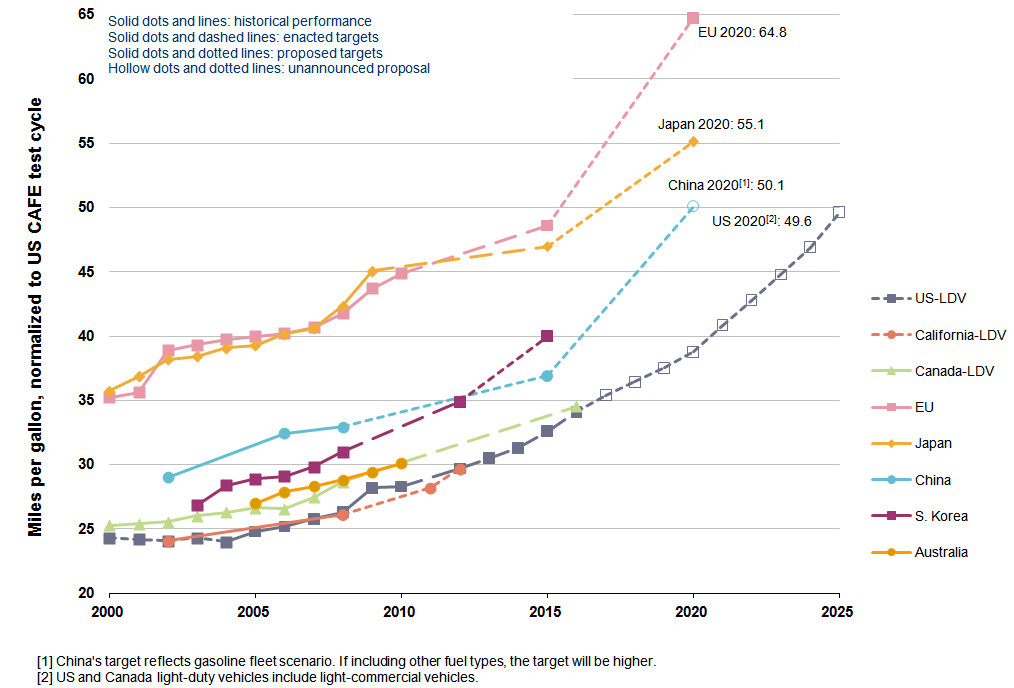 At the same time, cities in US, Canada, and Australia, are far more spread out than in Europe or Japan. There is more car dependency and people drive more and longer distances in North America.

What is the economic reason for the observed pattern?

The price of petrol / gasoline is surely a major reason, offsetting the effect of longer distances. In many European countries it is more than twice as high as in the US, mainly because of differences in tax rates, as shown here.

Given consumer rationality, the price of fuel might be expected to impact on fuel efficiency via choice between car models of different efficiency at the time of purchase. But do people actually behave rationally in this situation? Turrentine & Kurani (2007) found from interviews with households that consumers lacked the knowledge and understanding needed to estimate savings in fuel costs over time. Although their sample was small (57), this finding seems plausible. However, even if individual consumers do not behave rationally, it remains possible that the price of fuel is still for many an influencing factor, albeit imperfectly assessed, and that the aggregate effect of decisions by many consumers approximates to what might be expected given rational behaviour.

Allcott & Wozny (2014) tested the hypothesis that consumers, on average, are willing to pay \$1 more to buy a car with \$1 less in discounted future fuel costs. They used panel data relating to purchases of different car models in the US over the period 1999-2008, relying on changes in gasoline prices over time (rather than differences between countries) to permit a test of the hypothesis. Their sample was impressively large, including 86 million transactions. Purchases were assumed to be informed by assumptions on future fuel costs. On their base specification, willingness to pay for \$1 less in discounted future fuel costs was estimated as \$0.76. Alternative specifications with different assumptions on discount rates and the basis for forecasting future fuel costs yielded willingness to pay figures in the range \$0.42 to \$1.01. Given the large sample, the standard errors of these results were small, at most \$0.06, even after clustering by model and age was allowed for.

The above strongly suggests that the price of fuel has influenced fuel efficiency in the US. I haven't seen a similarly rigorous study for Europe, or comparing the US and Europe, but it seems plausible that this finding would extrapolate, if only approximately, to a cross-sectional inter-country comparison.

Not the answer you're looking for? Browse other questions tagged energy-economics or ask your own question.

5
Was the 2008 financial crisis caused more by the US subprime mortgage lending or more by an international energy and oil pricing crisis?