Questions about the Edgeworth box

I have some doubts about the Edgeworth box, it's a newbie one so thanks in advance for the patience. In case, I'm confused if we can count the root of the contract curve (point M) as one of the efficient points since it's part of the contract curve? In this case the indifference curves in the box don't "touch each other", therefore is not a point of efficient trade (as if MRSa = MRSv). Is my line of thinking correct? Can we also assume that every point in the contract curve are Pareto Optimal? Is it also possible for the utility change from one to another (say from N to P)? 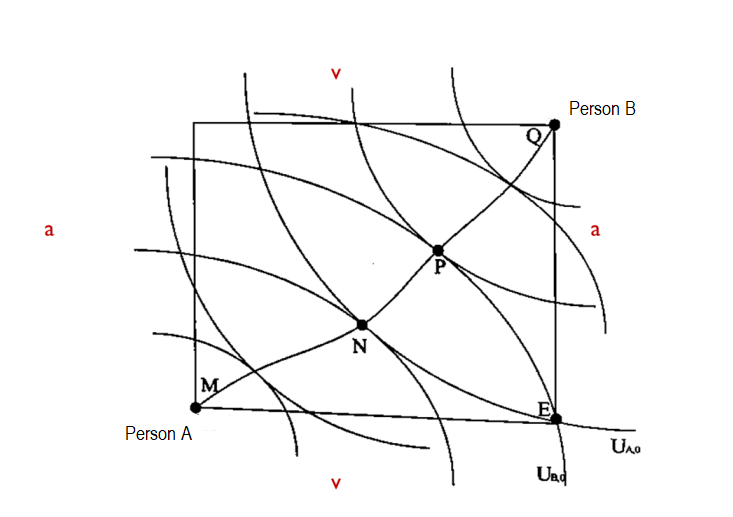 The contract curve is, by definition, the set of all Pareto efficient allocations. Therefore, any point that you choose on this curve--even the end points--is also Pareto effecient.

In this case the indifference curves (IC) in the box don't "touch each other", therefore is not a point of efficient trade (as if MRSa = MRSv).

What would that look like? From Person A's perspective, their indifference curve sits on point M and opens upwards. At this point, they have been allocated nothing, so they prefer the set of all allocations above their IC.

While this allocation may not be equitable (Person B has everything, Person A has nothing), from a Pareto perspective it is efficient in the sense that, you cannot move from this point (Point M), without making one of the people worse off--i.e. if you shift anywhere from point M, though it would make person A better off, it would make person B worse off. So even here at the border, we can find a Pareto effecient allocation.

Is my line of thinking correct? Can we also assume that every point in the contract curve are Pareto Optimal?

Is it also possible for the utility change from one to another (say from N to P)?

Not sure exactly what you mean here, but the second fundamental theorem of welfare economics says--broadly speaking--that you can get to any point on the contract curve in a competitive economy by changing the endowment allocations.

The end points of the contract curve (assuming that preferences are strictly monotonically increasing) is efficient.

Consider point $Q$ where person A consumes everything (let's call this $(x_A, y_A)$.) Since preferences are strictly monotonically increasing, any deviation from that point would make person A worse off.

The usual "tangent indifference curves" could be thought of as "interior solutions", and the corner points are "edge cases".

(Not sure what @Brennan answered, but hopefully I didn't make the same mistake :P)

3
Marginal rate of substitution
5
Is the contract curve orthogonal to the priceline?
5
Does a Robinson Crusoe economy have a substitution effect and an income effect?
1
Monopoly/Monopolistic Competition Productively Efficient or Inefficient?
3
a risk lover agent preferences and the preference of risk natural agent may be the same
1
Pareto Optimality of Endowments
4
Edgeworth box and identical tastes
0
Core with unequal-treatment example?
1
Find the set of Pareto efficient allocations