How can there be an electronic bank run?

I read that at 2008 there was an electronic bank run.

From what I undestand bank runs occur due to the fractional reserve banking system. The actual real money you can hold on your hand are a fraction of the total money in banks. So if everyone goes to ATM and gets the money in their hand, it means that the bank runs out of the "real money" and people can't withdraw these "real money".

So if the same number of people, instead of withdrawing from the ATMs, do electronic transactions that eg get their money from a bank to another bank (or any other institution) how can there be a bank run? It just doesn't make sense to me.

What you describe is the "traditional" bank-run.

The 2008 incident you refer to, was called an "electronic bank run", because the problem was not caused by people trying to get tangible paper money in their hands in excess of the actual paper money available to the banks.

The problem was that through electronic banking and electronic wire-transfer orders "funds were redirected out of the U.S. money markets" as one account of the incident puts it.

So why is this a problem?

Because under "fractional banking", electronic money functions exactly as paper money. You work, and your employer pays your salary through a wire transfer. You go buy something and you pay with your debit card, where you transfer electronic money from your account to the shop's account.

In other words, electronic money, once created, is as much actual purchasing power as paper money is. It is wealth.

But this means that this "electronic bank run" was impoverishing the US banking system. But since the transfers were electronic, by necessity they went out of the US economy also -to some bank accounts in other countries. It was wealth going out of the US economy, not just paper money going out of the banks but still in the economy -and at a speed and volume unimaginable in the old days, due to the wonders of the internet and digital technology.

So essentially, it is a totally different kind of problem (and more serious) than the "traditional" bank run, so it should perhaps have been characterized by using another term.

Historically, banks would take deposits, telling depositors that they could withdraw their deposits upon demand. The bank would then take these deposits, combine them with with the equity of the bank's owners, and extend long term term loans to business, governments, and home owners. Under normal circumstances, this is a nice business model, give 3% interest on depositors' accounts, lend the depositors money at 6% interest and then be playing golf at 3pm. You pocket the difference between the deposit rate and the lending rate and live in Connecticut or Luxembourg.

The problem is those pesky depositors. Because they know that the bank has tied up most of their money in these illiquid long term loans, they can't possibly pay everyone back if they all show up to demand their money on short notice. Under normal circumstance they have no reason to show up and demand all their money back. But if there are inklings that the bank has lost money on its loans, or even just that you've heard that other people are thinking about pulling their money out, you can have this in no time: 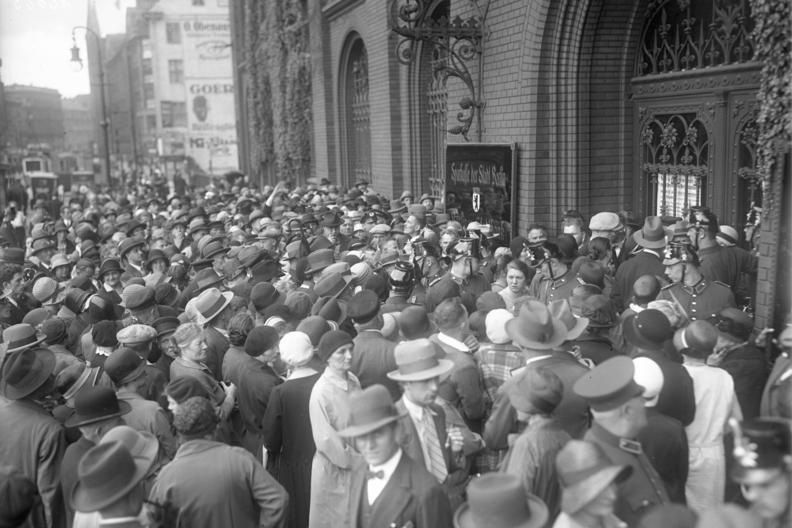 So what is different when deposits aren't cash but instead are electronic? Nothing of substance. The bank still has the vast majority of its liabilities invested in illiquid assets, in America usually mortgage and commercial loans. The bank still must pay on demand in cash or electronic bank transfer. If it doesn't have enough electronic cash, it has to find people who will pay cash for their assets or lend against them.

I think what confuses @user2832080 is that false assumption that the problem is "how much cash is in the ATMs" when in fact it is "how much cash / deposits in other banks / readily marketable securities the bank can get a hold of on short notice" A bank could be able to give all the money by ATM that people want but still have not nearly enough to pay the electronic transfer requests. A bank could have run out of cash in the ATMs (as happens from time to time around natural disasters) but have plenty of liquidity to pay out transfer requests.

All of which may sound odd to the lay reader. I recommend Richard Brown's article: A Simple Explanation of How Money Moves Around the Banking System for a nice overview of how you don't need cash to affect transfers between institutions. The key idea is that banks have cash on hand, they have cash balances at other banks, and a limited amount of marketable liquid assets (like government bonds). If the demands to return deposits exceed those values, the bank is having a run, with or without the lines out front.

6
How does the money supply behave when bank loans are repaid?
0
How would banking in EU change if taxpayers withdrew their support for Deposit Guarantee Scheme?
1
How would banking in UK change if minimum required capital to open own bank would be £100k instead of €5m?
6
When was fractional reserve banking introduced?
3
Fractional reserve banking and bank insolvency
1
Given fractional banking and the multiplier effect, for every dollar in circulation, how many dollars in spendable money exist?
24
Why do banks take deposits if they do not need them to make loans?
0
Is the equity lending involved in naked short-selling structurally equivalent to fractional-reserve banking?