Why do we say that trade and specialization according to comparative advantage lead to one-time increase in PPF of given country?

PPF shows us different combinations of goods that we would be able to produce if we employed existing resources of our country in the most efficient way.

One thing to notice about PPF: It's completely independent from our agregate utility function. For an example, if we have only two types of goods, wine and cheese, then maximum production of only cheese (like 100;0) will be on our PPF, even if we would want to have some wine too or if we don't need so much cheese.

Now suppose we (Cheesetopia) trade with another country (Winetopia) and specialize in our comparative advantage (cheese). We will be able to consume, for an example, 50 cheese and 50 wine at the same time, a feat impossible for us under autarky. We would be consuming outside our production capabilities, outside of our PPF. But our current production would be on our good old PPF.

Thus I fail to see how free trades causes any shift in PPF or causes a country to produce outside its PPF. At the least for the Ricardian model.

(My answer is based on what I learned from the answer and comments of user 1muflon1. This answer wouldn't be possible without their patient attempts to put some knowledge under my thick skull. Here I will pretend to be another person and address Past-Me as "You").

At first, let's start with intuition for why increased consumption implies increased PPF. Then we will give more rigorous explanation if you won't be satisfied with said intuition.

Now suppose we can hire a more experienced alchemist (who knows more advanced and nuanced alchemy) to replace our current alchemist. This new alchemist can transform Y of cheese in Z of wine, where Z>X. What will happen if we hire them? It would mean that transformation rate for our cheese production improved, meaning that by producing Y of cheese we now produce more in terms of wine, that now we have better alchemist technology. As a consequence, it would mean that our our PPF increased.

Now suppose that we have our not very good old achemist, but we have a possibility to improve our exchange rate for Y of cheese. Suppose our current exchange rate is based on our internal (i.e. national) market and we are an autarky. But in the external world there is a country that can give us a better bargain for our cheese, let's call it Winetopia. If trade negotiations with Winetopia will be successfull then it will agree to exchange Y of our cheese for Z of its wine, where Z>X. Thus after we negotiate terms of trade with Winetopia value of our Y of cheese in terms in wine will increase. We still produce only Y of cheese, but now Y of cheese represents more wealth in terms of wine thanks for better exchange rate. As we saw in the example above, we could have the same increase in wealth if we hired a better alchemist. In the example with a better alchemist we concluded that use of a better alchemist leads to increased PPF. This example with Winetopia has no significant difference with the above alchemical example, thus by analogy we can make similiar conclusion, namely that improved exchange rate leads to increased PPF.

If you don't like this explanation, then we can take the alternative approach:

GDP measures production, if real GDP (nominal GDP isn't enough because its changes can be attributed to deflation/inflation) increased after trade (assuming that before trade stared we already were on PPF, rather than below it) with Winetopia then our PPF increased too. 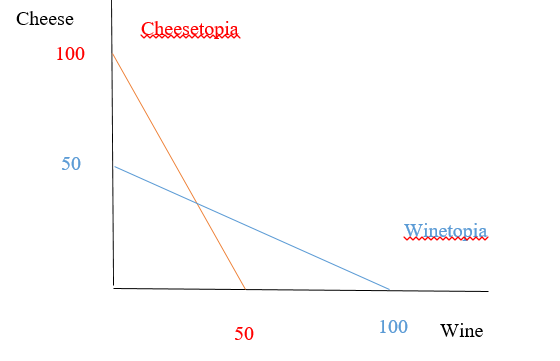 Numbers in yellow cells (except of price of 1 cheese in terms of cheese, which is obviously always 1 cheese under any circumstances) were calculated based on numbers in white cells. Theoretically it's possible to calculate price of 1 wine in terms of cheese from data that we already have, but here I will just take word of user 1muflon1 that said prices are correct and omit calculations. Calculations for the table themselves are based on what was described in comments by 1muflon1 here(It starts with words "repeating itself"):Do I make correct conclusions about international trade (and ways to increase GDP) from the expedenture approach formula for GDP? As for nominal GDP of Cheesetopia (we don't count GDP for Winetopia because it's excessive for our purposes), it's GDP=100 before trade(C=100, everything else equals zero) and GDP=100+50-50 (C=100, X=50, M=50) after trade. In all cases GDP is shown in terms of cheese. Thus we see why both nominal GDP for Cheseetopia before trade (i.e. "Cheesetopia Old") and nominal GDP for Cheesetopia after trade (i.e."Cheesetopia New") are equal to 100. The table shows real GDP of Cheesetopia increased after trade, thus we can conclude that its PPF increased after trade. Its PPF now ends in point (0ch,100w) instead of old point (0ch,50w).

One more thing. A sceptic could try to provide the alternative explanation: "Post-trade production in terms of cheese increased NOT due to trade, but because Cheesetopia now spends all its labor on producing the good of its comparative advantage, namely cheese". But they would be wrong.Production in terms of cheese will never increase just due to specialization. Because no matter if we specialize or not, we are still on the same PPF, thus real GDP will be the same anyway.

Now, I wont post full solution for a Ricardian model because it is not part of your question but in this case valid solution would be that the trade prices will be 1 cheese for 1 wine (if you want to know why maybe post it as a separate question about solving Ricardian model). Now under this trade scenario both cheestopia and Winetopia can produce only the good in which they have comparative advantage (i.e. only cheese in Cheesetopia and only wine in Winetopia) and at the trade 1ch for 1 w they can now access all the following points in consumption (note the points for two countries overlap but I ploted them next to each other so you see that second country does not disapear): 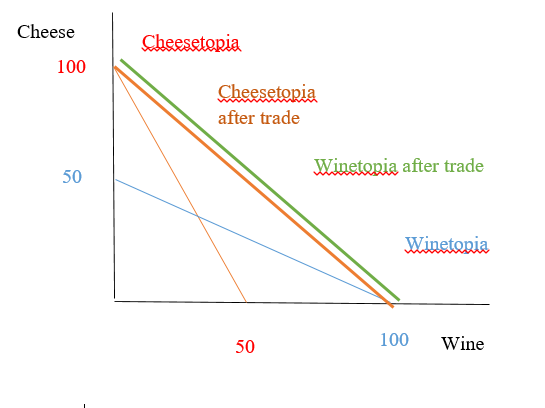 Now, whether anyone agrees that this increases a PPF it is indisputable that it increases the consumption possibilities of two countries. Thats plain from the picture. So now a question is following. Can we call this expansion of consumption possibilities increase in PPF? I think yes and also many textbooks call it like that for the following reasons:

Lets select Cheesetopia and lets select point of consumption (0c,100w) which is a point of consumption only accessible by trade. Now if you claim that this point does not represent new PPF, at this point the production then a consumption point (0c,100w) should not show up on aggregates as GDP which measures the production as that would imply that production is outside PPF which by definition must include all production possibilities of a country. To calculate GDP we have to choose some good as numeraire (money) it does not matter which one we choose lets do cheese. So at the consumption point 0 cheese and 100 wine the components of GDP will be C= 100ch (here ch is the currency cheese they actually consume wine), X = 100ch (they export cheese) and M = 100ch (they import 100 wine and again cheese is the currency here). So GDP in this case is GDP = 100 + 100-100 = 100. So here we have a contradiction and there is only two ways how to resolve this contradiction:

Now you can pick your 'poison' from the above option. Economically, the second makes sense. Intuition is that there is no meaningful difference between producing cheese at home and via trade transform this production of cheese into production wine and between actually being able to produce wine at home at the terms of trade. Or another way how you could express that intuitively is that in the new PPF any combination of goods can be produced by producing just cheese which is the highest point on the pre-trade PPF and which is also the single point where pre and post trade PPF will be exactly same.

Furthermore, to see that this is the same lets consider this scenario. 1 Winetopia gets destroyed by a tsunami so only Cheesetopia is left in the world. Now imagine that Cheesetopia will send some scubadivers to recover the Winetopia's wine production technology hence now Cheesetopia can produce both wine and cheese at 1 labor. Now the PPF is exactly the same as with the trade (meaning there is no meaningful economic distinction between trading.) 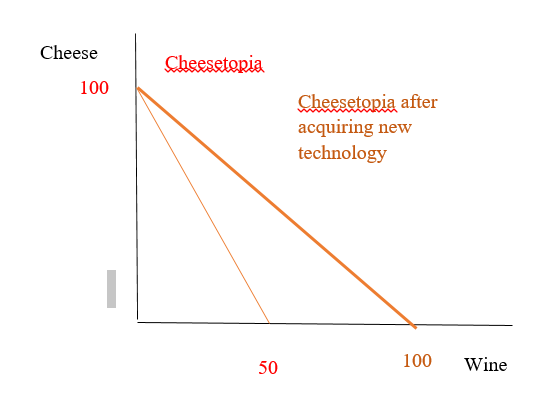 Not the answer you're looking for? Browse other questions tagged macroeconomics international-trade comparative-advantage or ask your own question.

0
Do I make correct conclusions about international trade (and ways to increase GDP) from the expedenture approach formula for GDP?

6
Ricardo's theory of comparative advantage for many countries
2
In the Ricardian model, why are two out of 3 cases invalid?
5
Who exploits comparative advantage in international trade?
4
Heckscher-Ohlin with different technologies
2
(Modified comparative advantage model)Can trade with a country that only has one industry be mutually beneficial?
0
(Ricardian model)Is it correct that complete specialization in comparative advantage CAN lead to DECREASE in total production?
2
Is my reasoning about economic growth and environmental sustainability correct?
0
How can we know how PPF of our country looks like?
0
Why do we have autarky price of mud pies equal to 0.5 of cheese, while it must be zero?