Fixed costs in the long run

This example doesn't bode well with me. We are doing analysis of costs on the first hand to plan for our long term use. If an example talks about making our fixed costs zero by shutting the whole production, then it itself defeats the purpose of planning. I, therefore, haven't been able to understand as to how we can have zero fixed costs in the long run (enough time to change all the factors of production) if we continue to work.

Any help will be appreciated

You should quote directly from the book you're citing, because I think you might be mis-reading it.

At the Econ101 level, there are two important frames for thinking about fixed costs: one is that in the long run, the contribution of fixed costs to average cost falls to zero. You can see this in the standard textbook graph, which will typically look something like this: 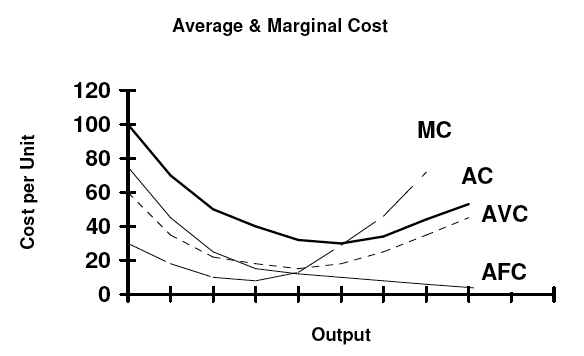 Note that Average Fixed Cost tends to zero as more units are produced. True to the circular nature of much economic reasoning, often "the long run" is defined as the period for which average fixed costs fall to zero.

The other frame is around what constitutes fixed costs in the first place. In the short run - which, in your example, is the contract period - rents are fixed costs because they are contractually unavoidable. When faced with the decision about whether to operate, in the short run a factory treats fixed costs as "sunk" and cares only about recovering average variable cost (if I can produce widgets and sell them at cost, I am indifferent to producing or not producing).

Where it gets confusing is that in the "long run", defined as the period exceeding the term of the contract, the firm is free to negotiate rents and so these are now treated as variable costs. This isn't really the same as "fixed costs falling to zero" because it's not as if the firm can somehow escape paying rent for buildings. Rather, it reflects the fact that in the long run, the firm has some ability to control what it pays for rents.

It's pretty normal to be confused by this at the entry level. In my opinion, it's not great nomenclature. The takeaway is that you need to be very clear about the context you're working in, before you can be clear about the meaning of the terms you're dealing with. In one context, "fixed costs" are "one-time sunk costs" whose impact on average cost of production falls to zero in the long run because that one-time cost is distributed over a growing number of widgets. In the other context, "fixed costs" are unavoidable costs in the short run that, in the long run, don't fall to zero but rather are redefined as "variable costs" because the firm gains the ability to control them in some limited sense.

In neither case does the firm avoid fixed costs by not paying them, unless it really does shut down.

Not the answer you're looking for? Browse other questions tagged microeconomics cost or ask your own question.

0
What is the main cause of differences in the costs of living?
1
Relationship between short-run marginal cost(SRMC) and long-run marginal cost(LRMC)
3
Is optimal labour zero when (i) capital fixed and (ii) elasticity of substitution less than 1?
3
How to track costs and calculate price?
2
Why is the price of capital ‘r’ ? (From Cost function)
1
Will a shift in the average total cost curve mean that the marginal cost curve will also shift up?
6
Fixed cost of a firm