Is there an index, parameter, ecuation, or anything to compare the tax pressure exercised by a country in relation to others countries?

In my country we are told often that the tax pressure over the companies and people is huge, making it unbearable and being a reason bankrupting the Economy, and one of the largests in the world. We are told that each product price is more than 50% of taxes and each company has to pay more than 50% in taxes for each employee they have. But when I take a look at the overall amount of money collected by taxes in a year, this seems to be over 100 times smaller than United States, a supposed very capitalist country which opposes heavy taxation. Of course we have to take in consideration other parameters, such how large are the economies of each country, but if I compare the amount of money collected with taxes in relation with the GDP of each country, it would seem my country pays half of the taxes of United States (100 times less taxes with 50 times less GDP than US) . I thought that may be I should compare people's wages with the amount of taxes divided the amount of people, but it still seems that United States is paying over twice the taxes that we pay here.

Then, because of all of this, my question is,

I am not sure how you calculated the tax revenue in relation to GDP, but one measure would be tax revenue as % of GDP. This is quite common measure of how heavy the taxation is because it tells you what percentage of total output produced by country is collected by government. OECD provides data on this measure here.

However, it can always happen that even a country with high tax rate collects less taxes than country with lower tax rate. First, you have classic Laffer curve - if you set taxes to 100% you collect zero tax revenue because nobody will work for fee so you collect the same tax as at 0 tax rate - hence having higher tax rates does not necessarily mean higher tax revenue. This being said empirically most real life countries don’t have taxes so high as to be over the peak of the Laffer curve so this will probably not apply to your case. Another, issue is tax avoidance. In some countries it’s child’s play to avoid VAT or many people can work in informal sector to avoid income tax. If government does not have good institutions that prevent this then again even government with 50% tax rate can collect less tax revenue than government with 10% tax rate if in second country tax authorities are efficient in preventing tax avoidance but in first country not.

Another possible measure could be looking at average or marginal tax rate across the economy and compare these between two countries. However, this is just crude comparison of how high taxes are.

You can also calculate average excess burden which is the same measure but it gives you information about average burden instead of burden at the margin (i.e. the last euro collected). I don’t know of any dataset that just gives you this measure though because it has to be estimated and based on different estimation techniques or assumptions behind the model used you can get little bit different values, but you can try to search for it in google scholar. For US there are many papers trying to estimate the excess burden of almost any tax you can think of, but if you come from small country research might be not available on this.

You have to make sure you use the same source of tax data for a meaningful comparison because it matters what is included in that total tax revenue and what isn't.

1muflon1 suggested using OECD data which at least on that page doesn't have Argentina. The IMF data available through World Bank does have it, but my point is that if you compare the two graphs below on the common countries (US, Denmark) you'll immediately see the problem that can happen if you source the tax data from different data sets... 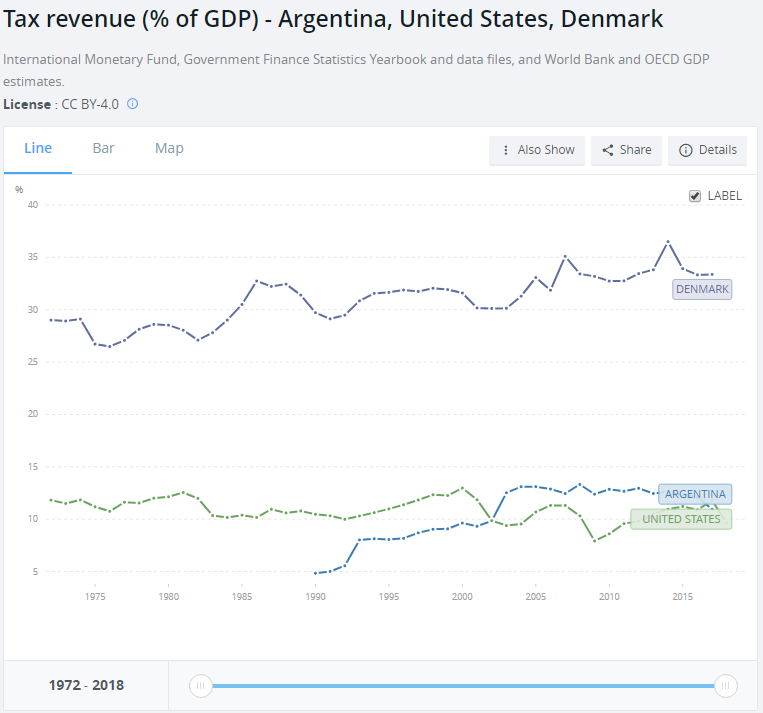 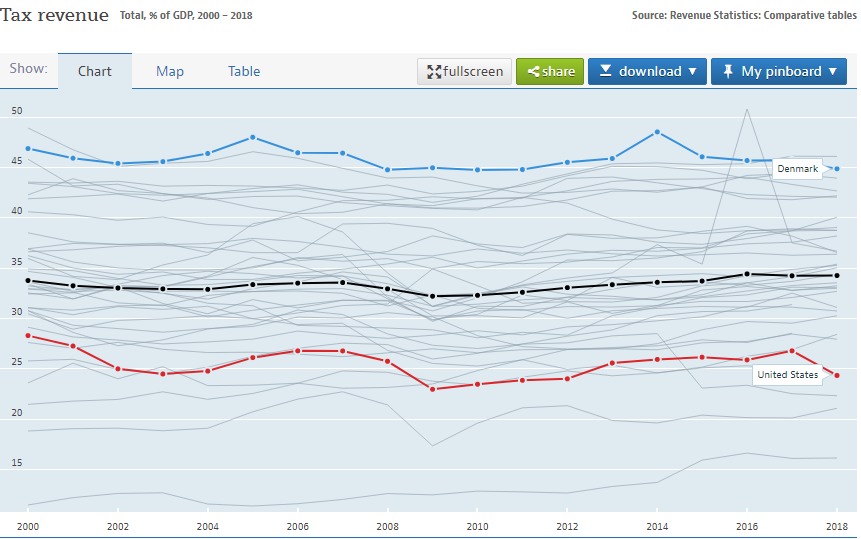 (Black line is OECD average in the latter graph.)

OECD does have the data for Argentina in a table somewhere and it's around 30% for 2017 using their methodology (somewhat above the US). Caveat lector. A bit more digging even found an OECD-produced graph that has both the US and Argentina, but it's only for one year (2017). From the OECD table (as well as IMF data graphed above) Argentina indeed has experience and increase in taxation in the past decade. (I guess they "learned how to tax", which was often a complaint (that they didn't) against Argentina a decade ago.) 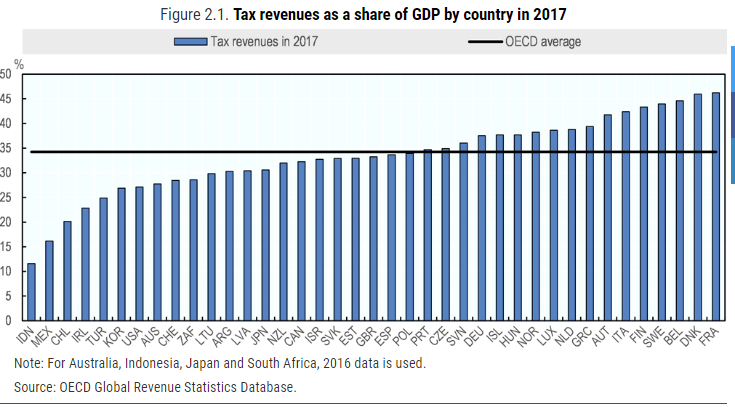 As discussed in the OECD page that has this last figure, countries with low GDP per capita tend to have lower taxation (as share of GDP). Relative to its GDP per capita bracket, Argentina does have a bit higher taxes (and the opposite is true for the US). 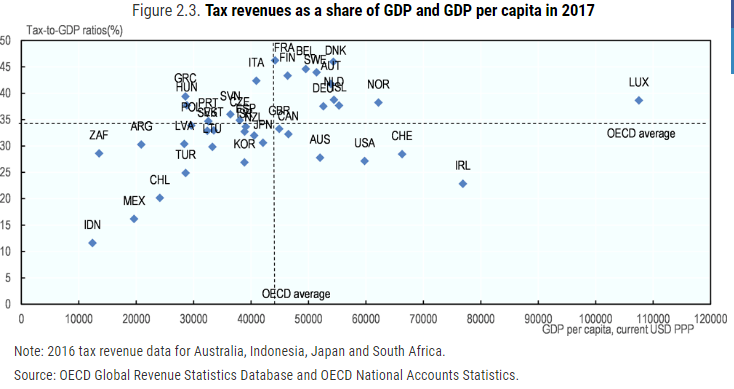 (The GDP of Ireland and Luxembourg are inflated with some corporate tax scheming, in case you wonder why they are so far to the right in that last graph...)

Also from that source, Argentina doesn't rely on personal income taxes much for its tax revenues. What Argentina is famous for (not sure if this has been reformed in the lastest packages)...

Taxes have always been a major concern for businesses in Argentina. According to the World Bank Enterprise Surveys, in the year 2017 over 36% of the firms in the country, three times more than the Latin American average, chose Tax Rates as their biggest business obstacle, and almost 80% of them identify taxes as a major constraint. For the subset of firms in the City of Buenos Aires, these numbers are even larger. The World Bank Doing Business Indicators also report taxes as the least friendly factor in doing business in Argentina. Nominal and effective rates are much higher than the region’s median, and total taxes and contributions (i.e. social security) are estimated to exceed 100% of the profits. Half of this burden is attributable to municipal taxes, led by the Gross Income tax (in Spanish, and henceforth, Ingresos Brutos).

Ingresos Brutos emerged in 1948 to simplify and modernize the tax system, but rapidly evolved into a policy instrument: a response to the Argentine federal government dictating and changing the revenues from national tax collection that each province would get. It is today the main source of income for the provinces and the City of Buenos Aires (henceforth City), an autonomous municipality similar to a federal district. It accounts for over 70% of tax revenues in both the City and the Province of Buenos Aires (henceforth Province), is quite invisible to the final consumer (as opposed to a sales tax), and easy to collect. Ingresos Brutos is, however, like gross income tax anywhere else, very unpopular for being a cascade tax, regressive, and not indexed for inflation. It is also non-neutral and distorts economic incentives, like promoting vertical integration for fiscal motives.

So this explains why Argentina seem among the top countries in that indicator (total corporate tax as percent of profit--a gross income tax allows over 100% of the profit to be taxed.)

the provincial turnover tax (Impuesto sobre los ingresos brutos) is under the full responsibility of the provinces. This turnover tax is particularly distorting because it is levied on sales at every stage in the supply chain, without any deduction for the tax paid in earlier stages. This creates incentives for vertical integration and for avoiding the inter-provincial addition of value, and it acts like an interprovincial tariff barrier.

So yeah, you can have "bad" taxes in other ways than merely overall burden... (This latter source also discusses the export taxes as having mixed effects.)

Not the answer you're looking for? Browse other questions tagged mathematical-economics taxation taxes or ask your own question.

14
Economic policies to decrease obesity (would they be effective?)
8
How is Singapore able to provide first-world public services, given its low income tax rate?
1
Why is the purchase of assets not entirely tax-exempt in the year of purchase?
1
Why do we model that higher government involvement increases output?
0
Are my conclusions correct in context of these examples of forceful extraction of money?
3
What is the different between a Sales Tax and a Value Added Tax?