According to an article at Yahoo Finance, the Swedish central bank dropped its zero interest rate to -0.1 percent a couple of days ago (the article is dated to Thursday, February 12th, 2015).

Now, already in 2013 this article from Business Times reported that Swedish households were repaying their mortgages so slowly that it will take 140 years on average. It seems that the mortgage repayment system in Sweden is such that while a bank may set a theoretical limit on how soon the mortgage should be repaid, the individual is free to make interest-only repayments as long as they see fit. So the 140-year average length is not caused by lenders granting 140 year loans, but by the individuals simply paying them back at a rather slow pace.

If mortgage debts are already being paid on a rather low rate, can reducing the interest rate to below zero actually help the economy? Wouldn't this kind of decision just speed up a crash?

As to the Forex rate for the Swedish krona, can it be expected that this situation pushes down the value of the krona?

Update: My reason for asking this question is because of the assumption that the Central Bank interest rate controls the rate at which other banks lend money to individual customers. Thus the central bank would set the interest rate low so as to lower the interest rates of loans in the country, and through this, to stimulate lending. This is what for example USA did during the first decade of this century.

I would have thought that stimulating lending in a situation where mortgages are being paid back at an extremely low rate would be a recipe for a house price bubble and subsequent crash(?)

There is some concern about the interest rates (currently at -0.5%) fueling a housing bubble in Sweden. This article at Fidelity states:

In a bid to track the ECB, Sweden has cut its interest rate below zero, a radical move that involves charging banks to hold some types of deposits with the aim of encouraging them to lend.

Similar trends have emerged in other small, open economies, such as those of Denmark and Switzerland, which also have subzero rates.

In Sweden, the central bank governor has warned that the low rates could be creating a housing price bubble.

A reason why this risk exists in particular for Sweden is because the regulation has allowed the borrower to pay only the interest on common mortgage types, and since the interest rates have been very low for many years, the sizes of these payments have been low.

These mortgages are referred to as "Swedish style mortgages" in this report published by the Swedish Central Bank (dated April 2015).

Overall the situation has stimulated borrowing and fueled the growth of the overall indebtedness of the households. Above report states on p. 4 that:

Current situation is still as described as on page 14 in the Sweden - Selected Issues paper published by the IMF (dated August 2014), shown in below image. 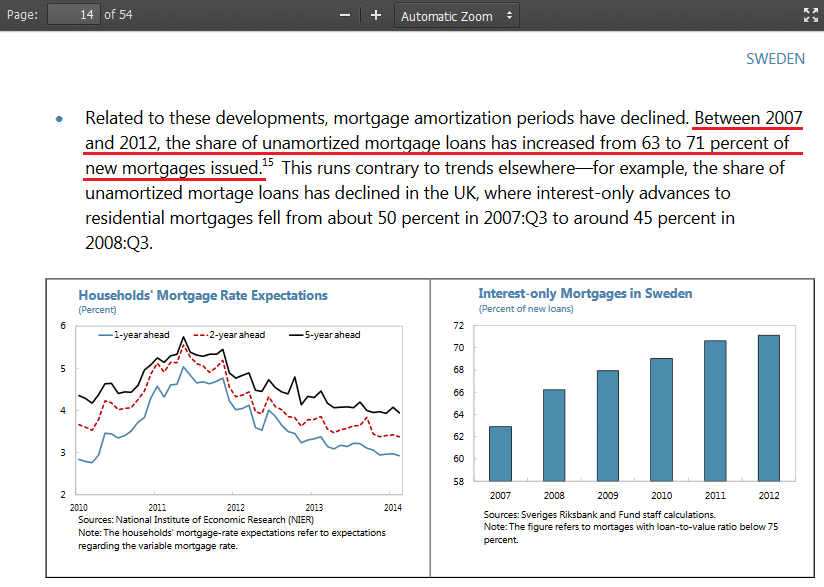 On p.15 this IMF report states that:

In fact they attempted to regulate the mortgages last year but according to this article it looks like the proposed changes were rejected by an appeals court. The article states that

But the watchdog backtracked after an administrative court of appeal in Jönköping in southern Sweden suggested that the proposed changes were not supported by Swedish law.

I am not sure however if they were able to pass that law later in some modified form.

Understandably the current level of indebtedness poses a large risk for the banks in the event of a downturn on the housing markets. However the already existing debt levels (as discussed in this report) in comparison to disposable income may make it difficult to implement drastic changes to the regulations.

The reason for the interest-rate cut you asked about seems to have been to avoid further deflation. One of the consequences of this has been, according to this article, an overall increase in house prices. So while at least two of the symptoms of a housing bubble (high prices and high levels of household debt) are present in Sweden, there are also factors that play against a US-style mortgage crisis, such as:

Update: According to this article, Sweden did change the maximum length of a mortgage to 105 years earlier this year.

First of all, that rate is the overnight deposit rate for banks depositing cash at the central bank, so it doesn't have a direct relationship with what people pay for their mortgages. (EDIT: yes, it does have an indirect relationship but it's not completely straightforward) People are still paying positive interest rates for their houses (and why would they not? No bank is going to give you money for loaning money from them!) And the rate to lend money from the central bank is still positive.

Essentially, the negative interest rate is there to dissuade the institutions that can interact with the Swedish central bank from depositing money there, since they would be better off just holding cash. So, this negative interest rate will cause them to have more reserves on hand, or, if they don't want to increase their reserves, they will have to loan out more money: and loaning out the money will have an indirect effect of stimulating the economy (since the people who need loans tend to be people trying to start companies or projects that will spend money). So basically, either it forces banks to be more solvent or it gets them stimulating the economy.

As you might be able to see, this only has a very remote relationship with mortgages or the mortgage rate, that being, it indirectly causes interest rates across the economy to stay low (since banks will want to loan out marginally more money, there will be some pressure downward overall on interest rates). This is definitely not anything that will speed up a crash, though arguably a long period of low interest rates may lead to people taking on too much debt which could cause problems if interest rates spike sometime down the road, but that's far away at this point.

Not the answer you're looking for? Browse other questions tagged monetary-policy debt interest-rate or ask your own question.