Why does supply (and demand) shift left and right as opposed to up and down?

I've wondered about this for a long time. In the past I rationalized it by saying that up and left were the same (or at least have the same overall effect), and that thinking in terms of left and right works for increase/decrease in both supply and demand curves. But things like taxes raise prices which is most intuitively viewed as an upward movement (although saying left and right are useful regardless). Then when I encountered Keynesian aggregate supply (which makes it obvious that left and up are not interchangable), I was astounded when I learned that decrease in supply, including supposedly taxes, actually moved the curve left, not up. Shouldn't taxes exist which increase price levels of all firms in order to pay for them, moving (Keynesian) aggregate supply up because whatever quantity of goods firms produce they have to set prices higher to pay for the cost of taxes?

Example where the supply curve shifts left or (equivalently) up: 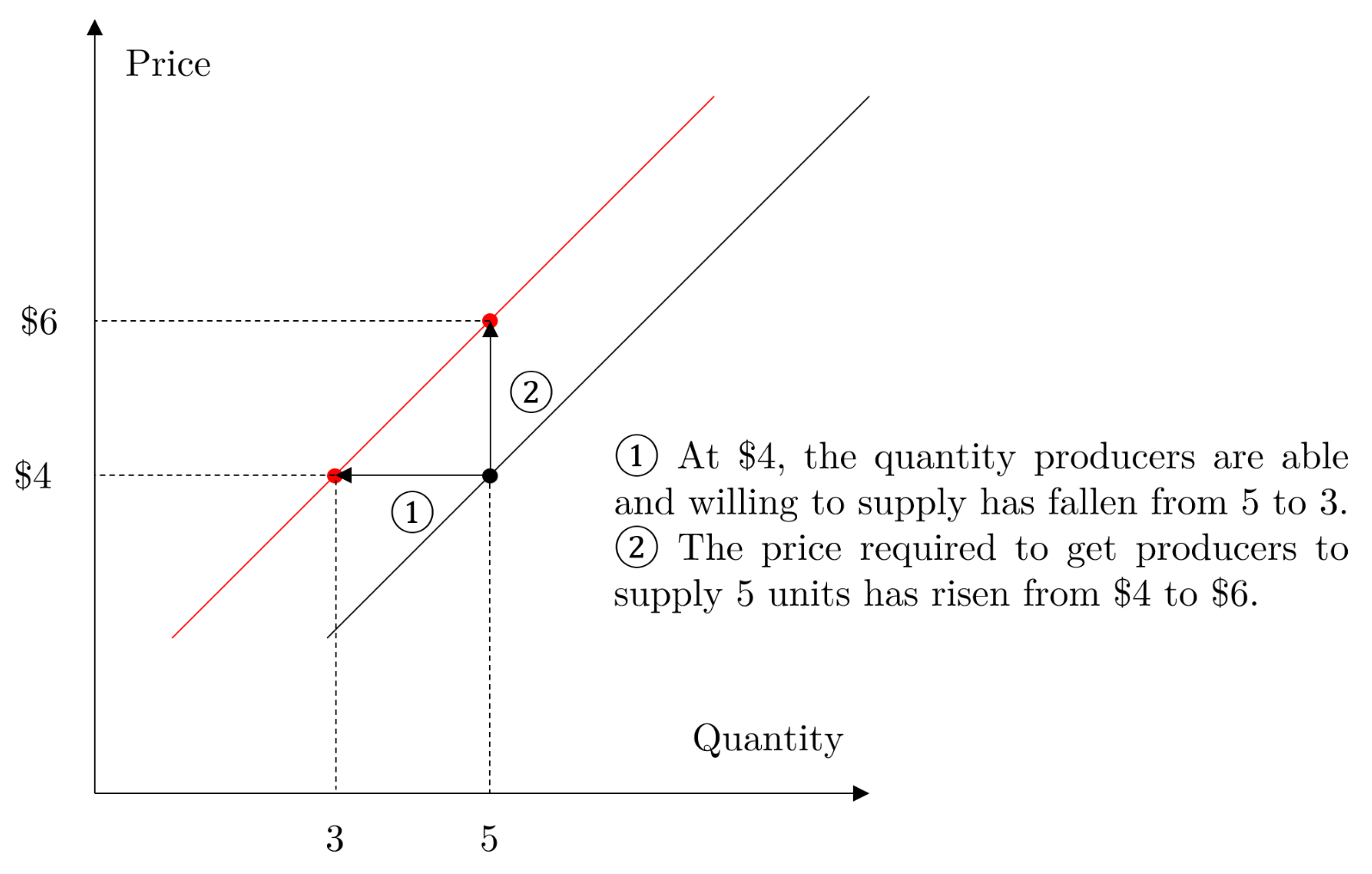 If you are wondering why the supply curve moves horizontally and not vertically, thinking about it this way may help.

Since you asked about the Keynesian aggregate supply: when we have a supply curve that is not perfectly elastic, a horizontal shift would result in a corresponding vertical movement in the equilibrium. But when there is a negative supply shock, such as imposing taxes, the producers require higher prices to offset their increase in costs. This is equivalent to saying that they can produce less quantity given the same price level as before (curve shifts left), or that they can only produce the same amount given a price increase that is equivalent to the tax (curve shifts up). So in such a situation, a leftward movement (or equivalently, an upward movement) indicates the same thing: that there is a negative supply shock.

3
When Does a Shift to the Right Happen in the Demand and Supply Curves Simultaneously?
4
Question About Basic Supply/Demand Concepts
6
Why does quantity supplied increase with price in economics?
0
Short run Aggregate supply curve is horizontal or positively sloped?
0
Trying to understand ceiling in supply and demand on picture
2
Price Changes in Factor and Product Markets
0
Increase in the price of skateboard wheels cause a decrease/no change in the demand of skateboards? (2 separate markets w/ 2 separate buyers)