What would happen to US economy before US government lose control over its national debt? 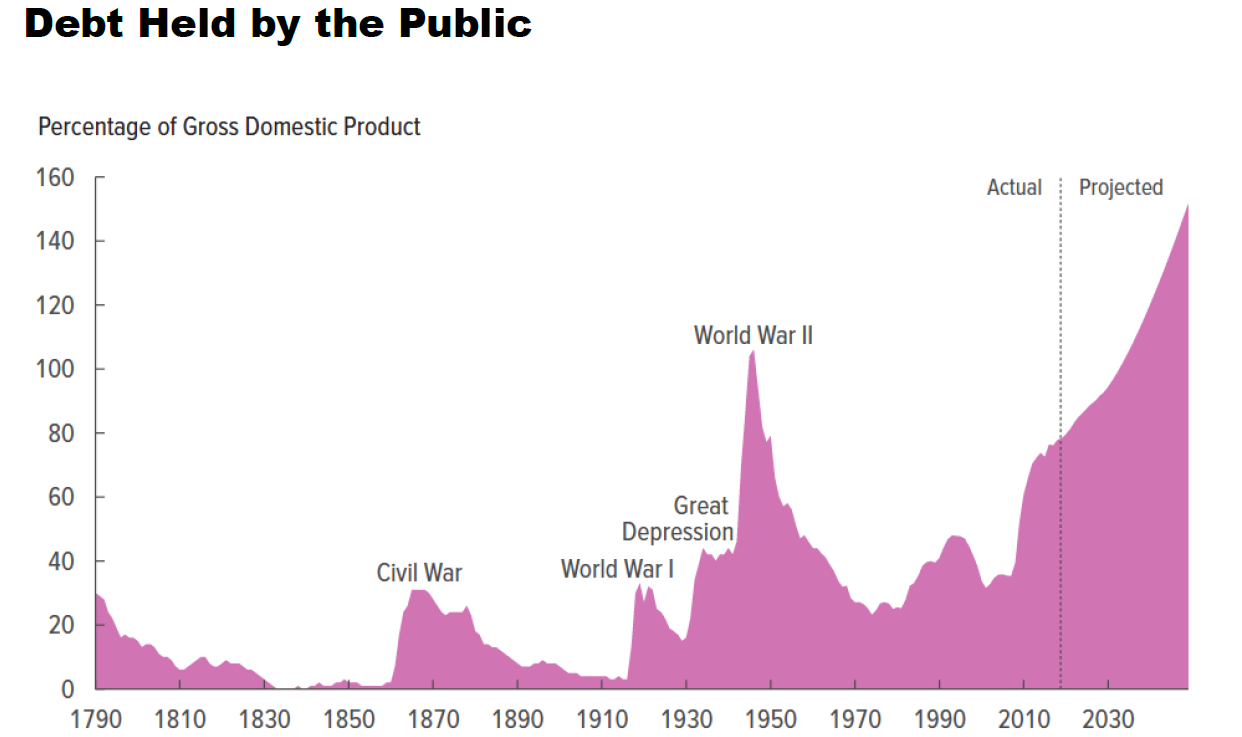 From this wiki page we can clearly see that US national debt is growing steadily after 2010 and now it's larger than US GDP already (at the end of 2019).

Still it's commonly believed the debt is maintainable. At least, neither the Obama administration nor the Trump administration care to spend (enough) effort to eliminate the debt.

To overly simplify, the absolute death sentence to this debt problem is that the whole government budget is not enough to pay the interest, but I suppose the actual critical point arrives much earlier than that.

Regarding US debt problem today, the only referenceable example of to me is Hyperinflation in the Weimar Republic . Yet they are only remotely parallel: Weimar Republic back then was hardly a major world power (politically and economically) while US being today's only global hegemony, let alone its Petrodollar policy and other global influence.

So I wonder, being such super power, what would happen to US domestic economy along the debt growing towards such critical point?

To make this question simpler, let's assume that during such progress

It depends. Mathematically, you just need GDP to grow at the same rate as the debt grows, and then you can sustain deficit spending indefinitely. But this simply shifts the line of questioning to "can GDP grow indefinitely", and for most people the obvious answer is "no".

Ironically, the band-aid solution that most developing nations have taken is to grow the population through immigration (ironically because this approach is seeing significant geopolitical pushback). It's well-known that more affluent countries have lower birth rates, and so immigration is the "obvious" solution to this. But it clearly carries its own challenges.

Over the long term, debt holders could demand larger interest payments. As the debt-to-GDP ratio increases, they’d want compensation for an increased risk. Diminished demand for U.S. Treasurys would further increase interest rates, which would slow the economy.

Lower demand for Treasurys also puts downward pressure on the dollar. The dollar's value is tied to the value of Treasury Securities. As the dollar declines, foreign holders get paid back in a currency that is worth less. That further decreases demand, and many of these foreign holders of U.S. debt are more likely to invest in their own countries.

At that point, the United States would have to pay exorbitant amounts in interest. The amount of federal spending today points to high-interest payments on the debt in the near future.16

Congress knows a debt crisis isn’t far away. In less than 20 years, the Social Security Trust Fund won't have enough to cover the retirement benefits promised to baby boomers.17

That could mean higher taxes or curtailed benefits once the high U.S. debt rules out further loans from other countries. This would primarily affect retirees younger than 70, but it could also affect those who are high-income earners and not as dependent on Social Security payments to fund their retirement.

The U.S. debt affects several parts of our economy and many people. Understanding what the national debt is and where it is headed could help you better prepare for your own financial future.

Not the answer you're looking for? Browse other questions tagged government-debt political-economy united-states or ask your own question.