I have a question regarding the national debt. I understand that foreign governments and/or central banks hold somewhere north of $6 trillion of US Treasury securities. I have found minimal information as to how much, if any, foreign national debt the US Treasury and/or the Federal Reserve Bank hold. I am curious if there are countries that hold our securities and the US, in turn, holds their securities. If so, doesn’t it make sense to clean-up the respective national balance sheets by calculating values for those securities and simply offset or cancel as much of those positions as possible?

I suspect this is an oversimplification of a complicated issue.

There is some data like that, but not split by private/government entities holding it. 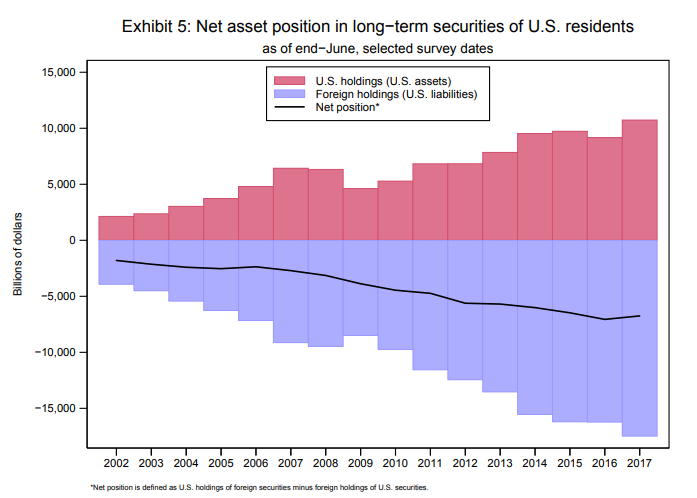 The US Fed does buy some foreign currencies as part of their SOMA (System Open Market Account) operations, and the Treasury also does that through their Exchange Stabilization Fund (ESF). According to that source these

are held in [...] in a variety of instruments that yield market rates of return in their respective currencies and have a high degree of liquidity and credit quality.

Note that these numbers are pretty insignificant relative to the private positions from the first graph I posted.

The same source mentions that the US does have reciprocal currency swaps with the ECB and the BoJ (about \$1 billion with each). It doesn't have any with China though and the latter's central bank holds large US reserves, trillions...

2
Government spending/borrowing difference/ national debt increase disparity
8
Is it possible to eliminate the U.S. national debt?
3
Credit market debt is $200 trillion?
4
What's the difference between public debt, government debt and national debt?
0
Proxy for debt service?
1
Why does the United States' national debt matter?
1
What would happen if the U.S. “refinanced” its national debt?
2
How can a sovereign debt ratio be high, but debt-servicing ratio be low?