Why do Eurozone members have a commonly higher Debt-to-GDP ratio? 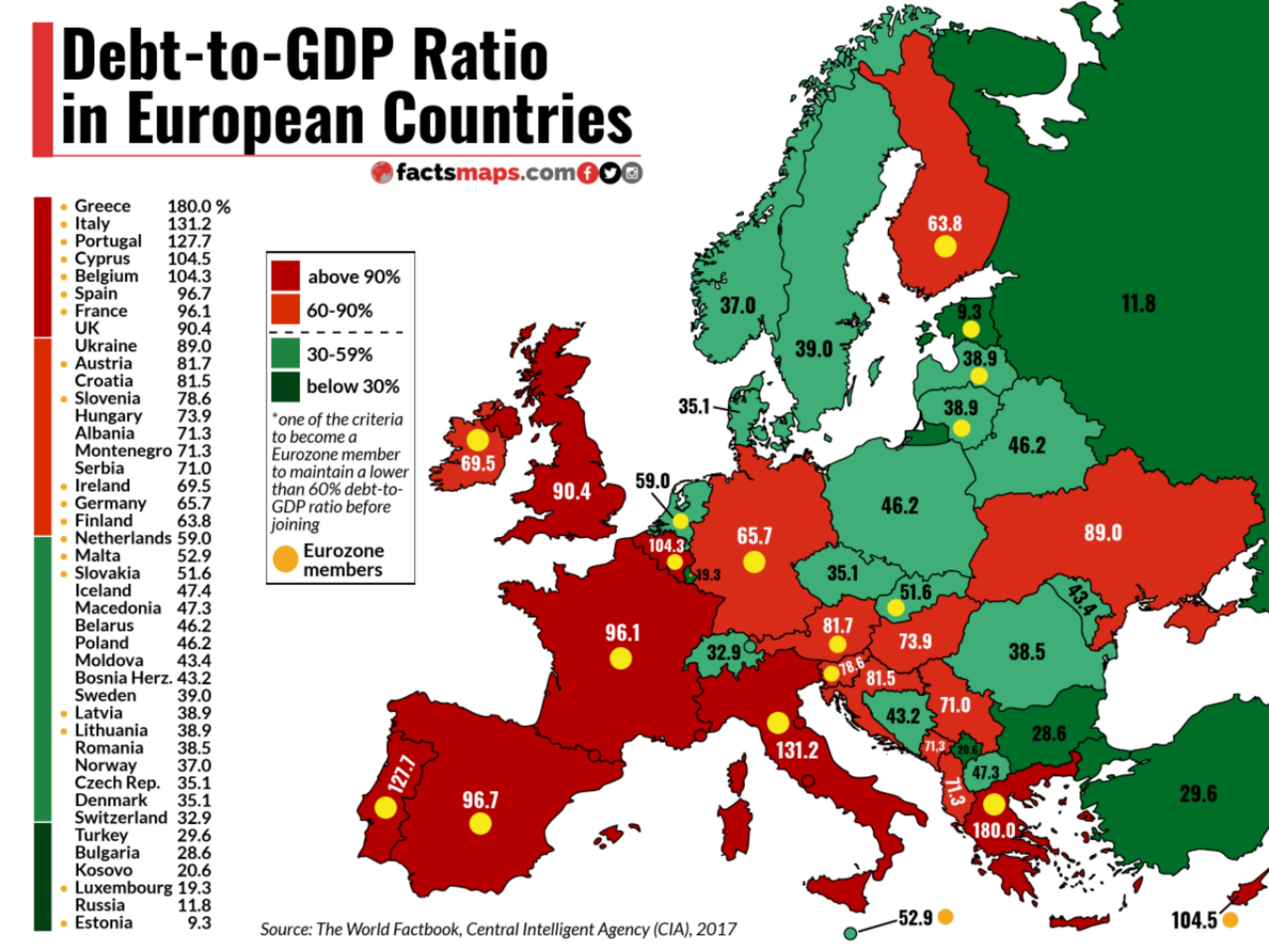 As you could find out from the map, among 22 countries whose debt-to-gdp ratio is above 50%, only 7 are not Eurozone members, and from which only UK is comparably large economical entity.

Interestingly, according to Euro convergence criteria, to adopt the euro as one country's currency:

The ratio of gross government debt (measured at its nominal value outstanding at the end of the year, and consolidated between and within the sectors of general government) relative to GDP at market prices, must not exceed 60% at the end of the preceding fiscal year.

So what's the reason behind that most Eurozone members have a higher Debt-to-GDP ratio?

They've already adopted the Euro (from which there's no "easy way out") so the convergence criteria is just dead letter after that...

The EU has a procedure called the EDP (Excessive Deficit Procedure), which seems to apply to both excess deficit (3%) and (in theory, I think) the debt/gdp ratio too (60%). In general it seems the EDP was mainly applied against the former rather than the latter criterion... and even then it took e.g. Spain a decade to come out of EDP (even though they don't meet the latter debt criterion still; it seems the EU just needs to be happy that they have a plan in that regard). The EDP criteria apply to all EU members.

Also, if you're part of a "small currency" you are more easily punished on forex market, as opposed to the bond market where southern Eurozone took their pounding--"Eurozone crisis" and all that.

Based on IMF data, of the non-Eurozone EU members, Hungary and Croatia aren't too far from the Eurozone average and have more debt/gdp than Germany. Poland has less than Germany, but not a whole lot less and they might cross in the next 5 years given the current trends. 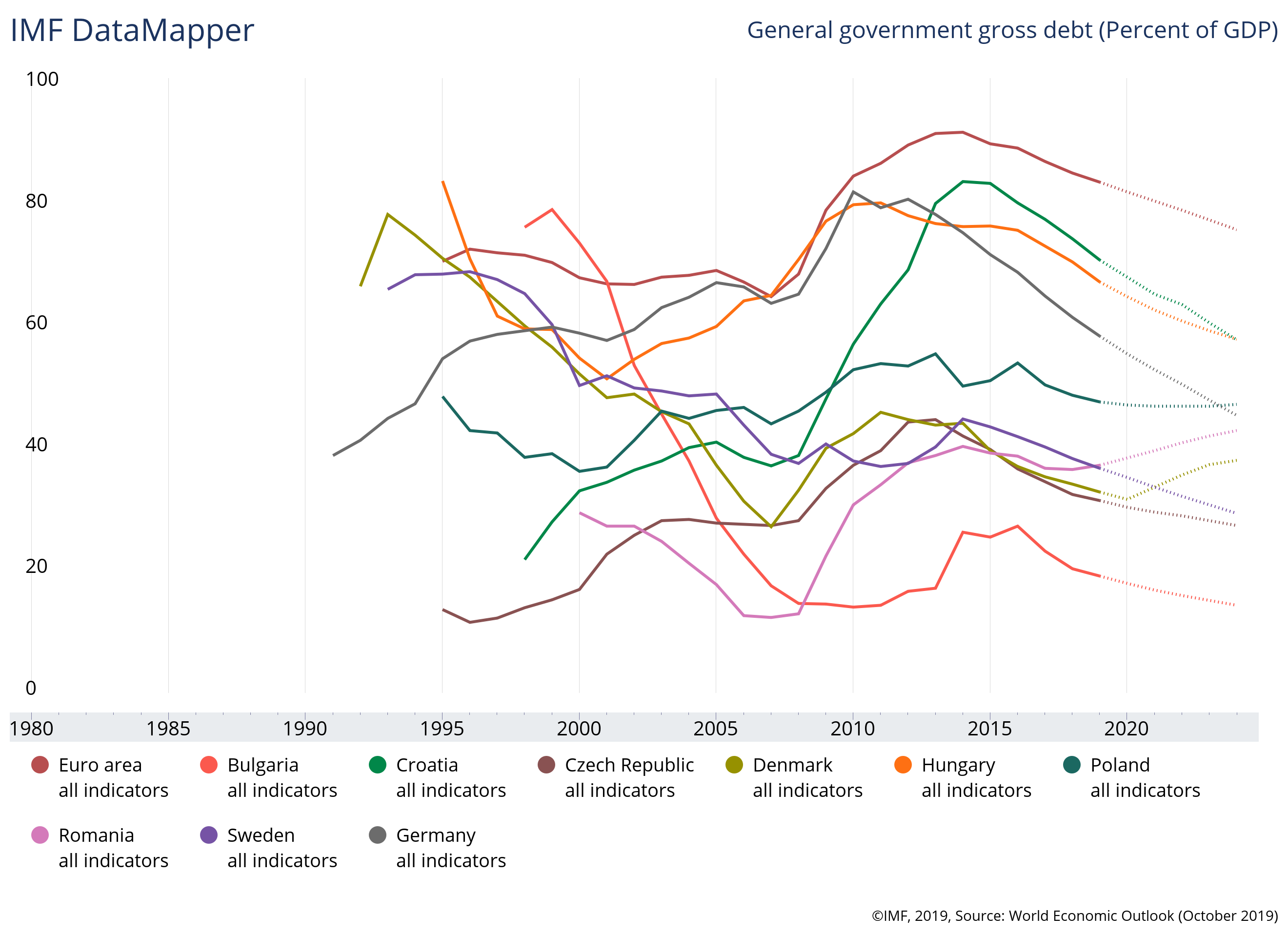 In the lower debt/gdp group are two Nordic countries Denmark and Sweden, but also two Eastern countries, Romania and Bulgaria. (The fifth in this group is the Czech Republic.) Romania, Bulgaria and the Czech Republic for example have among the lowest social spending as a ratio of GDP as well. Denmark and Sweden are at the opposite end in that regard; explaining their lower debt/gdp is not that easy. You might want to look at these countries individually...

Denmark apparently had the "crown" in taxes in the EU at in 2019; this could well compensate the higher social spending, as far as government debt goes. For 2018 on which I could find more detailed tax-to-GDP ratios, Denmark and Sweden are very close. Also Denmark and Sweden have experienced growth compared to Germany's, somewhat exceeding the UK's.

The flip side is that there's a high level of household debt in Denmark (130% of GDP in 2018) and Sweden is also well about average(90%) while Germany's (54%) is below EU average (66%)... which in this case is also slightly above Eurozone average (62%) (no doubt the latter is explained by the UK in this case). The Eastern counties are also far below [either] average. (Denmark seldom makes the news in the same sentence as "the IMF", but when it does, it's because of IMF's concern/warning about household debt.) 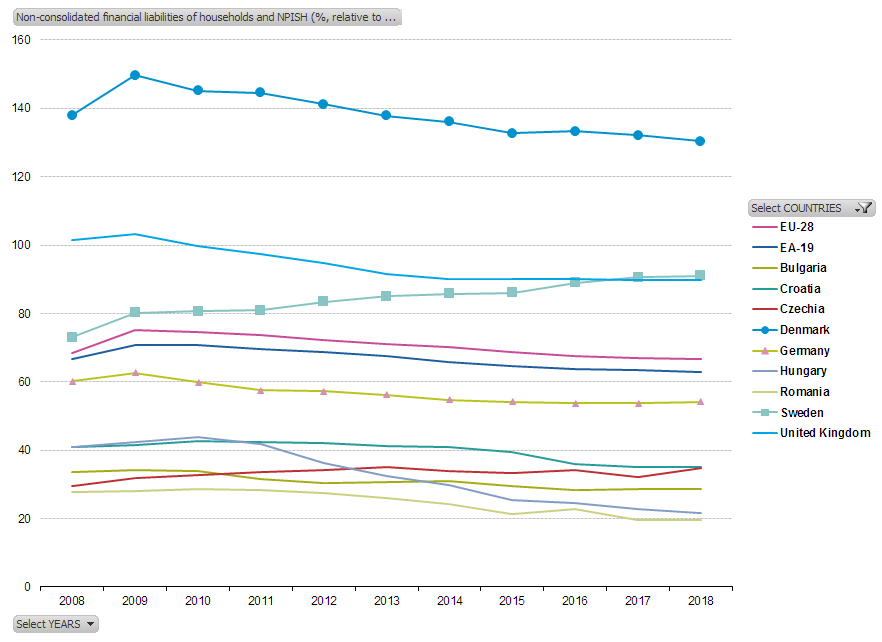 Not the answer you're looking for? Browse other questions tagged government-debt euro-area european-union or ask your own question.