What are examples for the phenomenon that more (or better) information makes everybody worse off?

More information is usually considered "better". Let's say a rational agent chooses optimally given his information on the circumstances of a particular decision problem. Then providing him with more or better information makes him (weakly) better off.

Other agents might be made worse off in the process, and total welfare might even decrease. Danove et al. (2003) e.g. argue that the introduction of mandatory "report cards" in New York and Pennsylvania in the 1990ies to evaluate bypass surgeries reduced welfare because it incentivized doctors to avoid treating very old or sick patients. In this example all patients got more information, and some of them, but not all, ended up worse off.

But there are also circumstances where providing agents with more information makes everybody worse off. When visitors are about to leave a crowded theater, truthfully informing them that a fire just broke out behind the curtain might have disastrous consequences for all of them. Informing the public that a particular bank is in trouble could trigger a bank run that leaves everybody worse off.

What are other such phenomena? I am looking for examples (in theoretical models or in the real world) of the latter kind, where exogenously providing a group of agents with more or better information leads to a new equilibrium which is Pareto inferior compared to the old one.

Traffic reports are another type of information that potentially makes everyone worse off.

A recent working paper (Wiseman and Wiseman 2019, https://drive.google.com/open?id=10B6VudYJOQB5w2UVBrYEjYc5wwzGZc8Z) shows this in a simple model of traffic.

I quote from the paper, "...public information about road conditions tends to increase average travel time when...3) the scale of the traffic network is large." This corresponds to their Theorem 3, where "...in a scaled-up version of any environment with excess capacity, traffic reports increase expected travel time."

Yet another broad way of thinking about your question is in terms of monitoring structures of repeated games. A recent paper (Sugaya and Wolitzky 2018 JPE, http://economics.mit.edu/files/11455) look at imperfect monitoring in cartels and show that less transparency can facilitate collusion, making all participants better off.

This sounds glib, but The Internet is an ongoing example.

In economic models where access to information is an explicit factor, we often gloss over the fact that mere exposure to information about the state of the world is not enough to improve welfare - one also needs the cognitive skills to use those facts to develop plans in support of preferences, and also the abilities necessary to manipulate the environment in execution of those plans. Homo economicus is implicitly assumed to possess both, but this is manifestly untrue about Homo sapiens. "The Death of Expertise" by Tom Nichols is a good first-look at the scope of the problem, viewing the interplay between limited human capacities and unfettered access to information ("signals", really) through a sociological lens. The Dunning-Kruger effect and the competition between identity/belonging goals and accuracy goals are two key elements to this.

If you want to get deeper into it, a host of other empirically-supported cognitive biases - anchoring, affect heuristic, availability bias, and so-on - suggest that the phenomenon of acting in response to an information set that becomes more complete with time exhibits hysteresis. This is tremendously problematic when recognizing that while Homo economicus is presumed to hold all of the available information in her head in one simultanous pre- $t = 0$ moment, each of the information sets held by every Homo sapiens carries a slightly different history than any other. To the extent that these information sets are compiled by experiencing signals available on the Internet, a proiri one should expect that a bigger pool of signals will yield a wider variation in the histories, and less rather than more concensus about the state of the world and which actions (usually requiring the solution of co-ordination problems) might lead to greater social welfare.

The “to be announced” or TBA market for agency mortgage-backed securities is a great example of this.

The short version is as follows: The TBA market is a market wherein one can purchase or sell for future delivery pools of mortgages that conform to certain characteristics (e.g., and to vastly simplify, 30 year mortgages at a 4.5% coupon) without specifying the particular mortgages to be delivered. Only government- or agency-guaranteed mortgages are eligible for TBA delivery. Of course, the incentive is for the pool seller to deliver the worst mortgages possible, but “worst” is entirely based on the mortgages’ prepayment characteristics, not on their credit quality (as they’re all guaranteed).

Why is this good? It makes for a really liquid market, because everyone just prices everything assuming it is bad. Buyers don’t waste a bunch of time trying to analyze pools trying to uncover some marginal advantage, because that’s simply not an option. So they can buy securities in this market blindly, knowing that they’re only being shortchanged in the selection of mortgages in the pools they buy to a predictable degree that is already priced into the market. This is really useful given that most of the buy side doesn’t have a ton of resources to spend on pool-level evaluations.

The result: a multi-trillion dollar market in annual primary volume (not counting financing that occurs in this market), that is estimated to be responsible for reducing the cost of mortgage financing in the US by 10-25bps on average.

The post of @Mmmmmm about traffic reminded me of Braess's Paradoxon: There are situations in a traffic network (under the assumption that all drivers are rational) where removing some roads leads to a lower average amount of time spent driving.

While the paradox itself was constructed with another goal in mind it assumes that all drivers know the optimal path to take.

Paul Krugman recently discussed the Bloomberg terminal, a classic example of a resource with the following properties:

The world must be full of examples of this. Dave Gorman once mentioned another example, where everyone on his flight, him included, had paid for priority boarding. You can guess what happened.

This is a very old idea in general equilibrium models with imperfect information and incomplete markets. More information could be detrimental if the agents that face uncertainty situations decide to insure and the equilibrium under full insurance is pareto optimal.

If in such a situation the state would be revealed with a perfectly informative signal the state of nature would be known before the opening of the market and so the insurance possibilities for the agents are destroyed.

Take a look at this links:

there was also another example in eeckhoudt, gollier and schlesinger "Economic And Financial Decisions Under Risk" but I cannot find it right away.

EDIT: @Giskard Example: Think about an example where you have two consumers with concave utility functions and endowments $ \omega_1=(1,0) $ and $\omega_2=(0,1)$ and state dependent utilities that assign 0 utils to the consumption of one of the two goods in one of the two states.

With the same utility functions and same endowments the economy is in an edgeworth box and as long as the agents are risk adverse they would like full insurance i.e. they will choose a point on the 45degree line with same consumption in the two states.

However, if a perfect signal reveals the state of nature before the spot market opens the guy that has the "bad" good cannot insure anymore because this economy doesn't satisfy the minimal revenue condition and there would be no trade. Overall, the concavity of the utilities and the decreasing returns of consumption guarantee that the welfare is higher in the case of full insurance than under perfect information.

This could be the case in a very simplified economy where the endowments are two different antivirals and only one virus (state) will attack (realize in) our fantasy world. But I have read also a conceptually very similar example on the insurance market in the book that I cited.

EDIT 2: Taking back Mas-colell book I have found this: 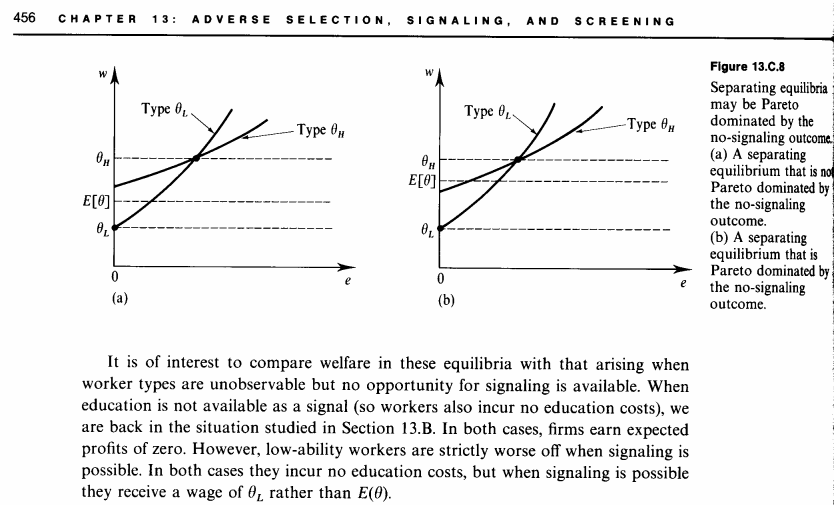 you could look into Spence (1973) signalling model where even if the signal is not costly could create such a problem!

Cases where the information increases perceived value but not real value

Information that can only be used for harming others and/or self are generally not helping the broad public.
The ongoing efforts to pursue 3D printed guns is one of such topics; while you may argue that some people in certain cases benefit from them, they are generally undesirable as knowledge.
Even more so, public information on nuclear devices can ruin a person's life while not likely making anyone better off.

Not an exact example but here's a case when omniscience is a disadvantage.

Suppose I'm playing a game of chicken where I'm driving straight at an opponent and whoever swerves first loses. If I know my opponent is omniscience or can read my mind [and doesn't have a death wish], then I can confidently conclude that I need never swerve. My opponent will read my mind and realize that I will never swerve, and hence realize he be the one who has to swerve.

Cortisol is a hormone similar to adrenaline that is used in emergencies. One of its effects is to shut down the immune system for a short period (while that emergency lasts) to save energy (there's no need for that when the lion chases you).

(Mis)using this effect, long-term stress can cause your immune system to be reduced, and make you sick. Panicking about a situation over which you have no control but plenty of information (e.g. the Covid-19 pandemic where the only defence is your immune system and reducing the risk of getting it) could cause more harm than less information.

Sleeping more helps the immune system, but stress could disrupt that as well.

Not the answer you're looking for? Browse other questions tagged game-theory utility information or ask your own question.

8
What are some theoretical explanations for deviations from the efficient market hypothesis?
2
Solve for the bundle component that makes one as 'well off' as earlier
3
Insurance and Hirshleifer effect
1
For the case of two goods, give an example of preferences that are represnted by a continuous utility function that allows for fat indifference curves