How will economy find long-term equilibrium in AD-AS model in case of a negative supply shock? 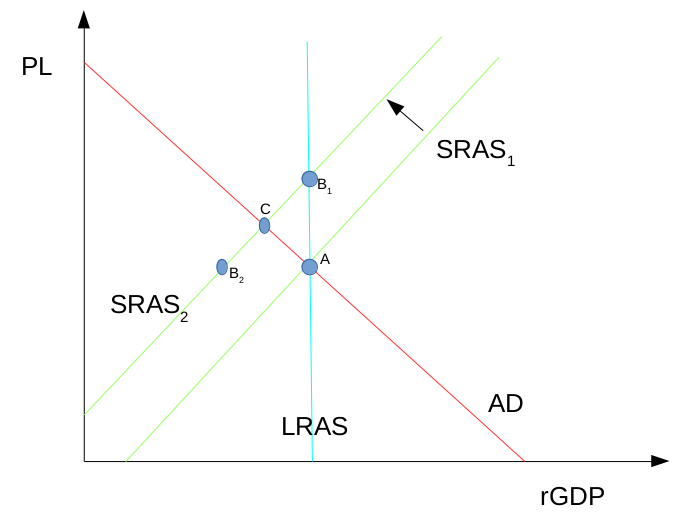 Let's suppose that negative supply shock happened that affected SRAS, but not LRAS. Let's also assume that previously there was long-run equilibrium at point $A$. Due to negative supply shock SRAS decreased, meaning that economy will be either at point $B_1$ (real GDP supplied stayed the same, but price level increased) or at point $B_2$ (price level stayed the same, but real GDP supplied decreased). In both cases they will lead to short-term equilibrium at point $C$

Not the answer you're looking for? Browse other questions tagged macroeconomics supply-and-demand price-level or ask your own question.

1
Questions on supply curve
1
Are there economic models that predict (only) a medium/long-term negative effect of protectionism?
0
A hypothetical question on neutrality of money
0
Why do expectations of inflation decrease SRAS (Short Run Aggregate supply)?
2
Why does the answer not include increased negative unplanned stock investment?
0
Increased production costs associated with increased output produced? Why do firms have prices increase with the SRAS or Supply Curve?