What do all the distributions that have the same Gini index have in common?

According to the Wikipedia article about Income inequality metrics, Gini index have the next disadvantage:

So, I want to ask - what do all the distributions that have the same Gini index have in common? (Empirically, they produce the same area under the Lorentz curve, but what does that mean?)

This is a Lorenz curve. 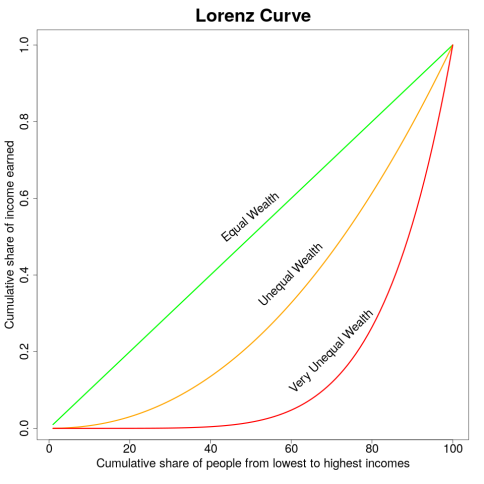 The Gini coefficient is the area between 'equal wealth' and your chosen line, divided by all the area under the equal wealth curve. There are other illustrations online, for sure, which would explain this.

The Wikipedia article is telling you that the actual distribution of income is not fully captured by the Gini coefficient. The same Gini coefficient could have different distributions of income. For example, it could move equally in the lower region at first and then flatten between 60 and 80 per cent of people. Or it could be that poorer people get nothing and the middle and upper classes are hoovering up the income.

Both examples, if you set up the toy numbers properly, imply very different distributions for poor people, but produce the same Gini coefficient.

Not sure what type of argument you are expecting. The Gini index is an area, so it is a statistic that loosely speaking is "adding" the heights of some values and normalizing it so that the higher the Gini, the higher the inequality. This is mathematically not too different from the average grade of a student in a class where you add up all the grades he/she/they obtain and then normalize it to be a number between 0 and 100 (at least in some countries). Thus you can use this analogy to draw some intuitions. Two students with a similar grade average have in common precisely that: the average grade they obtained. However, by looking at the average you cannot learn whether one student was very consistent over the semester and got an 80% in each exam, or whether the early exams were pretty bad, but then the student caught up and brought their average to 80%.

In the same fashion, two countries with the same Gini, share precisely that, they have the same Gini, which roughly measures the average deviation from the equal wealth distribution, but it tells you nothing about the variance, skewness, kurtosis or any other higher moment of the distribution.

Of course, having the same average puts some bounds on the wealth distributions that would lead to the same Gini, but these bounds are not very restrictive.

3
Measure combining growth and distribution of income
3
When a country collects data for calculating the Gini index, do they usually neglect single household?
5
Gini index vs Herfindahl index: one increases while the other decreases
1
Explaining the development of income inequality