I was recently reading this resource (http://www2.econ.iastate.edu/classes/econ101/hallam/Comp_LongRun_HND.pdf) which states that in the long run for perfect competition, price is equal to both the minimum of the long-run average cost and short-run average cost.

Let's start with what the short run and long run mean here. In this context, the short run is when a firm is stuck with some fixed costs. It may be able to vary labor or raw materials, making those things variable costs, but some other things (e.g. contracted salaries, rental rate of capital) are fixed costs. It may be hard to expand the size of a factory quickly or find a new place to move production. 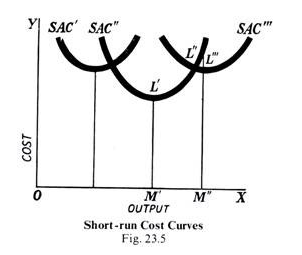 So here we see 3 different short run average cost curves. Each of these factories of course want to minimize cost per unit produced (average cost), and then set a price equal or above that (otherwise they'd be losing money!), so you have 3 different quantities that the firms will want to produce. You will notice that some of these firms will have to set a higher price than that firm with the production in the middle, so you can imagine which firm is going to get the customers in perfect competition.

Why are the SAC's shaped like this U shape? It is because generally there are economies of scale up to a certain point before things get too big to handle. A school can more efficiently allocate teachers by bumping up classroom size from 1 to 5 for example. But if you try to give the teacher a 1000 child classroom, you would expect things to be absolute chaos.

So now what happens in the long run? In the long run all these things we would normally consider fixed costs are actually variable costs. We can change the amount of capital we rent or other such things. 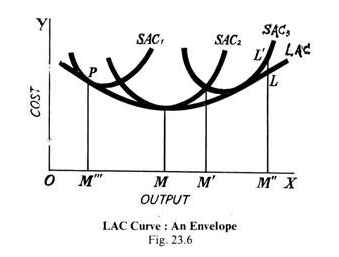 So given enough time, firms can change how much they want to produce along this line (LAC). We assume everyone moves along the same line because in perfect competition, we assume firms are identical, so that includes the technology and efficiency the firms have to produce the goods. So firms will naturally want to set production to the minimum of the long run average cost curve, so that they can set those low low prices meant to attract customers.

At least...that's what we would expect naturally, right? The last piece of putting it all together is seeing that the marginal cost equals average cost when average cost is minimized. I give a boring mathematical proof here. I assume you need no explanation for why firms set price equal to marginal cost.

So, price equal to short run average cost means that the firm produces its goods, sells each of them for the price, and breaks even. Thus we say no economic profit. Price equal to long run average cost means that all firms want to expand or contract their production so that they all produce the same amount of goods and basically all look identical. So all firms compete and push price down to the minimum of the long run average cost curve. They neither make nor lose money. So firms are indifferent between operating and not operating. It doesn't really make a difference to them. Thus, firms don't really want to enter or exit.

This particular question on the tangency has been asked before, with a good top answer here.

Look at it this way :

There are two timeframes in which firms make decisions - Short Run and Long Run. The actual time that these "Runs" include vary from Industry to Industry. For example, for a wheat grower, a full one year can be seen as long-run whereas, for a thermal power plant, 15 years would imply the long run. The answer to your question lies in identifying which decisions are made in which timeframe.

However, zero economic profits simply imply that Total Cost = Total Revenue. This can be implied from both Long Run Cost Curve as well as Short Run Cost Curve. In both the long and short run, firms earn zero economic profits and hence breakeven. However, as mentioned the decision to enter/exit is a long-run decision and hence that implication can only be based on the Long Run Curve.

Not the answer you're looking for? Browse other questions tagged cost-functions perfect-competition or ask your own question.

4
Deriving long-run cost function
2
Short Run Total Cost function Question
0
Why min AC = min SRAC at the minima of AC curve?
0
Why is the number of firms in the short run fixed?
2
Why is MC = ATC the same point for both the breakeven point and an investor maximizing return?