The Economics of Coronavirus

People are concerned about the economic impacts of the virus. How severe will the economic downturn be? Will the coronavirus cause a global recession worse than the 2008 crisis? I'm not looking here for speculative answers, but references with a solid economic background. For example, I found these:

Any other (academic) references?

Economics podcasts are also welcome. I found those:

Some nice references on Following the economic impact of COVID-19 by Stanford (SIEPR) experts.

Last update: On the weekly NBER Working papers released by April 13, 2020, there is already a lot of material on covid-19!

With the right keywords (and author searches) from earlier papers, I actually found some academic output already; this might not be peer-reviewed yet, i.e. preprints:

JP Morgan has put out some estimates already, although they don't detail their methodology as much as a peer-reviewed publication would (have to).

The U.S. economy is projected to contract by 14% in the second quarter, after experiencing a 4% contraction in the first quarter, before recovering to 8% and 4% growth in the third and fourth quarters. Euro area GDP will suffer an even deeper contraction, with double-digit declines of 15% and 22% in the first and second quarters, before rebounding by 45% and 3.5% in the third and fourth quarters.

“There is no longer doubt that the longest global expansion on record will end this quarter. We now think that the COVID-19 shock will produce a global recession, as nearly all of the world contracts over the three months between February and April,” said Bruce Kasman, Chief Economist at J.P. Morgan. Initially, the expectation was the novel-recession may generate limited labor market damage, but J.P. Morgan Research is now forecasting the unemployment rate for developed markets as a whole will rise 1.6 percentage points in the next two quarters.

“The rise in unemployment will be sharper in the U.S. than in the Euro area. Most immediately, U.S. initial jobless claims should spike above 400,000 in the coming weeks,” said Michael Feroli, Chief U.S. economist at J.P. Morgan.

McKinsey has a somewhat spread-out (March 25) presentation, but a couple of slides with their scenarios/estimates I could fish from there: 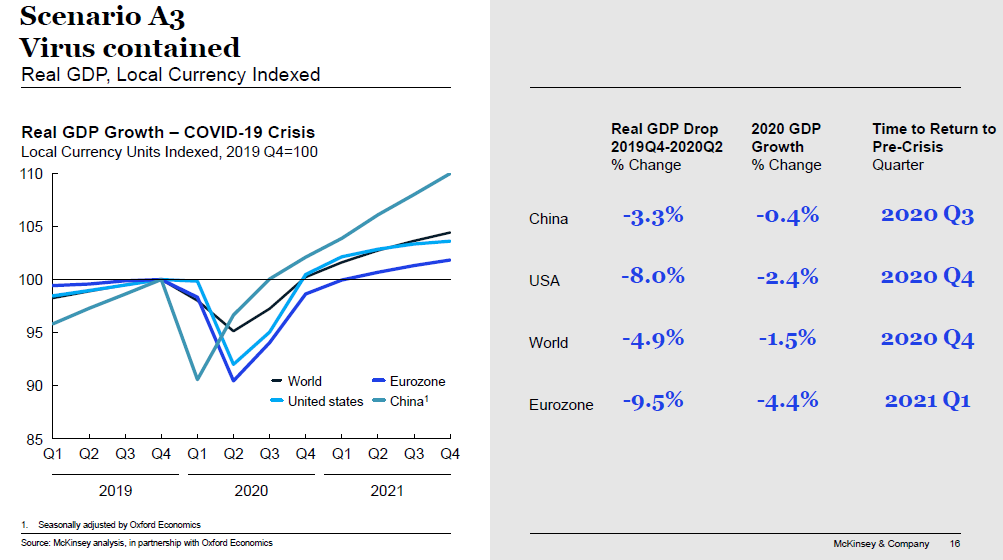 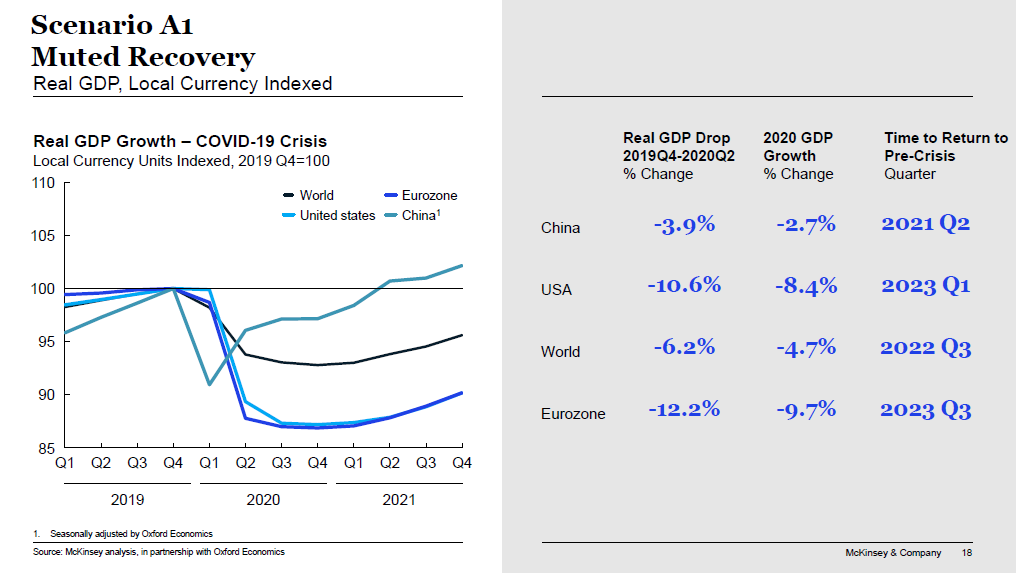 Likewise, PWC has a March [white]paper mostly focused on Australia... but which does come with a global map attached of their estimates of GDP losses, alas in absolute figures only (and I think over one year based on what they say on the previous slide): 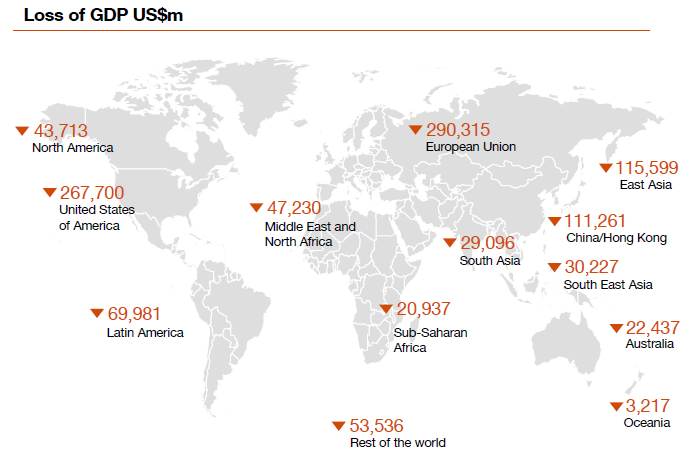 Before the COVID-19 outbreak, there has been a niche academic domain of estimating the economic impact of pandemics already, typically using a CGE model. Results depend of course on the assumptions used. E.g. Smith, Keogh-Brown et al. had a series of papers approximately a decade ago. Quoting from a later one that covered more than one European country:

Results suggest GDP losses from the disease of approximately 0.5–2% but school closure and prophylactic absenteeism more than triples these effects.

So they went as high ~10% GDP losses. While they did not envisage government mandated lockdown(s), they modelled "prophylactic absenteeism" in response to ~3% death rate media reports as the most severe case. An earlier paper of theirs, on UK only is open-access in the BMJ. Quoting their assumption from there

almost everybody in the population will know someone who has died once the mortality rate reaches one death per 300 people, triggering prophylactic absenteeism.

The same authors (Keogh-Brown and Smith) also published in 2008 a fairly detailed post-hoc account of how economic predictions for SARS fared in hindsight... which generally wasn't all that good, meaning that most models overestimated the economic impact of SARS. It cites positively an 2003 ADB paper of Fan that hedged its bets on two different scenarios (early containment being one of them).

The two pandemic scenarios modelled give quantitatively and qualitatively different results. [...] Our results show that the peak GDP effects on the world economy of an influenza pandemic are in the range 0.06 to 1.01 per cent in the peak year depending on the nature of the pandemic. Our results are smaller than the only previous estimates of the global economic effects of influenza pandemics by McKibbin and Sidorenko (2006). They estimate reductions in global GDP of between 0.8 and 12.6 per cent depending on the severity of the pandemic. Our results are not directly comparable to McKibbin and Sidorenko as they did not model a continuum of pandemic scenarios across the virulence-infectiousness continuum. Rather, they assume a given reproducibility of the virus (infectiousness) and vary virulence across their four scenarios. Further, they implicitly assume multiple waves for all their scenarios as they presume that new infections continue to occur for greater than one year. This is likely to characterise only more extreme pandemics (such as the 1918–19 flu) rather than milder pandemics. Differences in the range of influenza pandemics modelled by us and McKibbin and Sidorenko are justifiable given the uncertain nature of future pandemics. Our results thus build upon the findings of McKibbin and Sidorenko by extending the estimation of potential GDP estimates over a further range of potential pandemic threat scenarios.

[...] Our results show that the global macroeconomic effects of an influenza pandemic may be significant but are also likely to be short-lived. The largest economic impacts of an influenza pandemic are driven by reduced international tourism, due to risk-modifying measures by households and travel restrictions imposed by health authorities, and lost workdays, due to illness or formal social distancing measures designed to contain the virus. This is consistent with the work of Keogh-Brown et al. (2009, 2010). [...]

Verikios seems to work for KPMG Australia nowadays and they have released a COVID-19 model that is fairly detailed in explaining its assumptions, for example it has separate pre- and post-stimulus arms/scenarios, but it mostly covers the Australian case, in particular only models the government response of that country.

KPMG uses a NiGEM (New-Keynesian) macro model, and they've basically tweaked some parameters of this using estimates of shocks in four areas: reduction in productivity due to additional sick leave by workers, reduction in productivity due to additional carer’s leave by workers, incremental investment premium, capacity utilisation adjustment (i.e. supply chain disruptions). The first two were informed by fairly detailed labour & health statistics, the latter two seem a bit more arbitrary to me, e.g. they added a flat 1% investment premium.

I was hoping the IMF would have something more concrete than this, but I guess they are weary of advancing anything more detailed yet:

The COVID-19 pandemic would cause a global recession in 2020 that could be worse than the one triggered by the 2008-2009 global financial crisis, but world economic output should recover in 2021, the IMF said on Monday.

Georgieva issued the new outlook after a conference call of G20 finance ministers and central bankers, who she said agreed on the need for solidarity across the globe. [...]

The outlook for global growth is negative and the IMF expects “a recession at least as bad as during the global financial crisis, or worse,” Georgieva said.

Earlier this month, Georgieva had warned that 2020 world growth would be below last year’s 2.9 percent rate, but stopped short of predicting a recession.

Georgieva on Monday said that a recovery is expected in 2021, but to reach it, countries would need to prioritize containment and strengthen health systems.

“The economic impact is and will be severe, but the faster the virus stops, the quicker and stronger the recovery will be,” she said.

The CBO has now posted its own assessment for the US economy. It disclaims that it is "highly uncertain, especially for later periods", but basically, for the second quarter of 2020 it predicts 10 percent unemployment and the economy to contract by "more than" 7 percent.

The WTO Secretariat has posted this self-explanatory chart on April 8: 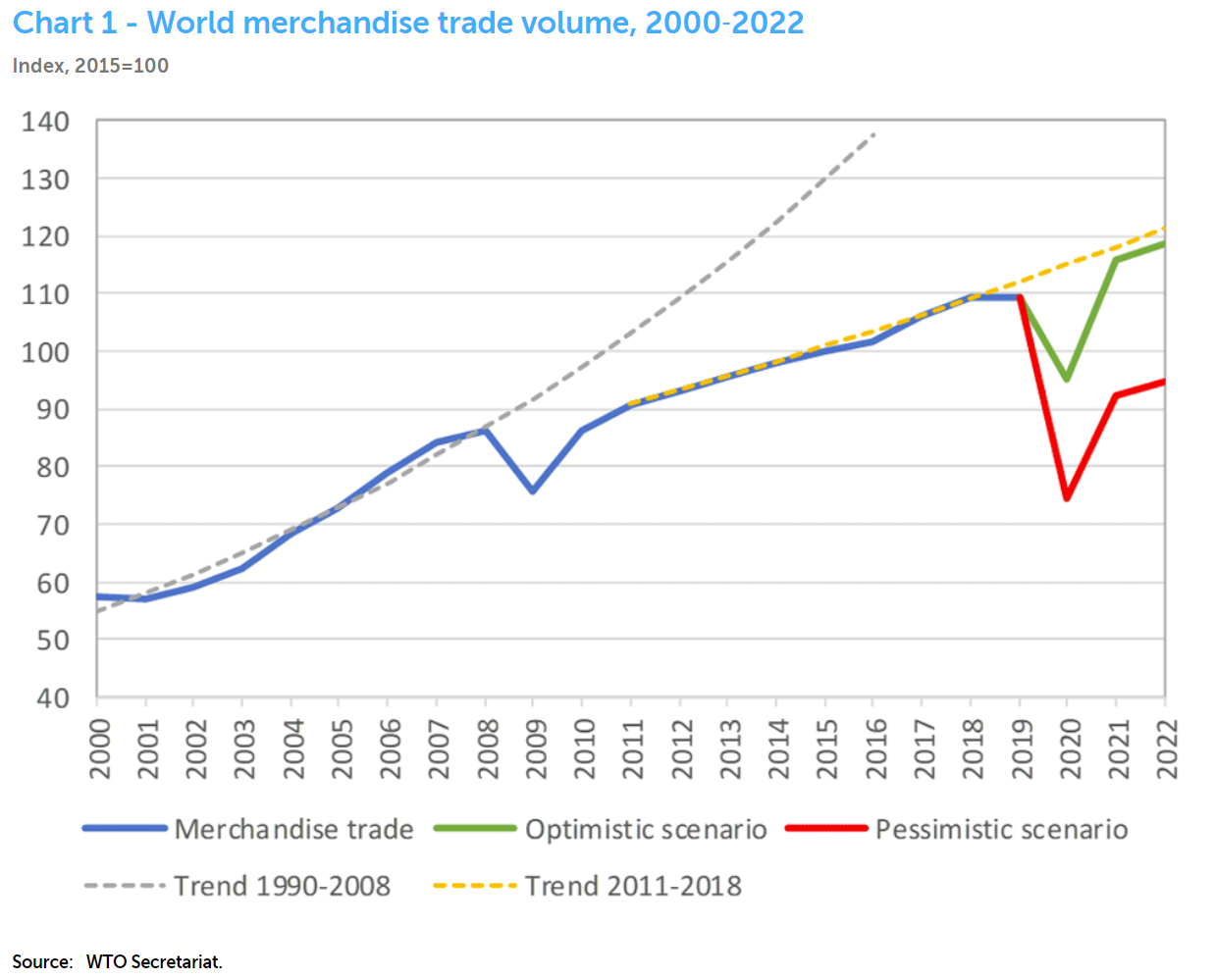 Let me add a couple more references. There's a (very) recent working paper, "The Macroeconomics of Epidemics" by Eichenbaum, Rebelo, and Trabant:

Slightly older, but still extraordinarily recent is "Fiscal Policy during a Pandemic" by Faria-e-Castro:

There is also theoretical discussion of (strategic) incentives in pandemics at the afinetheorem blog:

That post links the paper, "Game Theory of Social Distancing in Response to an Epidemic" by Reluga (PLOS Computational Biology 2010): https://journals.plos.org/ploscompbiol/article?id=10.1371/journal.pcbi.1000793

There the author explores a differential game of social distancing in a SIR model.

Just wanted to add that the economists at the Federal Reserve Board of Governors have posted some new papers this month (April). The new papers can be found here: https://www.federalreserve.gov/econres/feds/

Another article from the Bureau of Labor Statistics strait off the press:

"How many workers are employed in sectors directly affected by COVID-19 shutdowns, where do they work, and how much do they earn?" Day and Loewenstein.

Not the answer you're looking for? Browse other questions tagged reference-request economic-crisis covid-19-crisis or ask your own question.

-2
What's wrong if, to raise money, banks are selling Treasuries below their market price?
1
How likely is a total economic collapse due to the potential coronavirus impact?
1
Is there a per country estimation of the GDP drop due to COVID?

0
Won’t paying wages to temporarily unemployed due to Coronavirus result in inflation?
9
Economics Online Seminars
0
Why could boasting oil during the current drop in oil demand be good for Saudi Arabia?
2
The government is issuing massive debt for coronavirus relief - why aren't interest rates rising?
2
UK Government Coronavirus Job Retention Scheme Funding
9
Statistical models which represent the impact of strict measures vs no strict measures (and less economic impact), enforced due to Covid-19