My question is: Where is the analogous money being created by shadow banks? I.e. I cannot use a Repo agreement in a transaction, unlike how I can use deposit accounts in commercial banks. Intuitively I feel money is being created, but not in the exact transaction-useful form as traditional banking.

Is the "money" being created effectively by virtue that the collateral can be rehypothecaed?

Well, the ECB has given it [re]consideration... by excluding repos from their M3 starting in August 2012.

From a monetary analysis perspective, it should be checked, then, whether any of the liabilities issued by the shadow banking system substitute traditional bank deposits – that is, whether they are comparable, say, with the bank deposits included in M3 in terms of their degree of liquidity and their risk characteristics.[footone: The extent to which these liabilities are used as money substitutes is subject to cyclical fluctuations and dependent on market developments.] If this is the case, increasing shadow banking activity would diminish the meaningfulness of monetary indicators, with the monetary aggregates needed for price determination in the goods market, in particular, being defined too narrowly. That is why, in an ever-evolving financial system, it is crucial to regularly review the definitions of monetary aggregates. At the launch of EMU, the Eurosystem decided that the group of monetary financial institutions (MFIs) designed to capture the money-issuing sector should include not just euro-area commercial banks but money market funds as well, the rationale for this move being that for investors, money market fund shares were close substitutes for bank deposits in terms of liquidity and therefore, much like bank deposits, were likely to be related to spending decisions. However, as monetary analysis is based on the consolidated balance sheet of the MFI sector, the concept of balance sheet identity dictates that a corresponding counterpart must be entered for each newly added monetary variable. So if the Eurosystem adds the liabilities side of money market funds’ balance sheets – that is, the issued money market fund shares – to the MFI sector’s consolidated balance sheet, it follows that the assets side of money market funds’ balance sheets likewise needs to be included. This was relatively straightforward for money market funds because they could be subjected to reporting requirements and their business activities essentially confined to receiving and investing fund assets (the latter primarily in short- term near-bank investments). [...]

The increase in significance of the shadow banking system goes hand in hand with greater interaction between shadow banks and commercial banks. While an unconsolidated analysis of payment flows between the individual financial sector players is of interest from a financial stability perspective, monetary analysis seeks to adjust the monetary and credit aggregates affected by the interaction, if need be, so as to best capture the changes relevant to price developments.

Secured money market transactions known as repo and reverse repo transactions, which commercial banks conclude with central counterparties (such as Eurex Clearing AG, which until recently was statistically classified as a non- bank financial intermediary), are examples of this. Repo transactions (reverse repo transactions transactions) were originally presented in the banking statistics – which are crucial for monetary analysis – as an outflow (inflow) of funds for the money- holding sector. Yet for the most part, these transactions inherently constitute secured money market transactions between commercial banks in which the central counterparty merely acts as a go-between. Consequently, the money supply is not expanded at the macroeconomic level. These secured transactions grew steadily in importance over the course of the financial and economic crisis owing to the high level of uncertainty in the interbank market. They ultimately had such a significant impact on short-term monetary and credit developments, both in terms of quantity and their month- on- month volatility (see the chart on page 27), that the Eurosystem decided to exclude them from the calculation of M3 and its counterparts in August 2012. 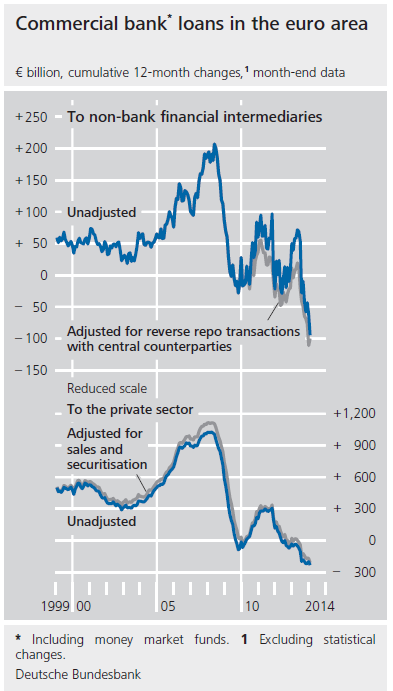 I don't know how the Fed deals with this. Like I said in a comment, the M-terms don't have universal definitions, when it comes to such details.

Note that the ECB has not excluded all the shadow banking from their M3 (not even all the repos), just the repos with "central counterparties". 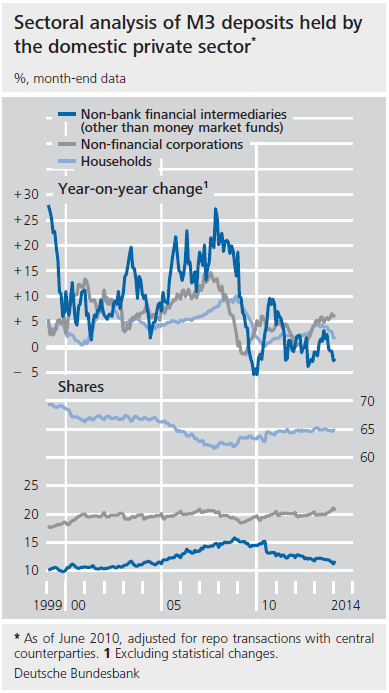 A repurchase agreement (“repo”) is used by investors to effectively borrow against their portfolio, which can then be used to finance other positions.

It should be noted that repos are included in M3 in the euro area, so they literally increase M3. Link to ECB website.

I will add this as answer:

Your comment "If you put your money into a Commercial bank, the "new" money being produced is the deposit account."

That's not how banks increase the money supply. They increase the money supply when they issue a loan. They do not require reserves to do this. Even in times when reserve requirement is 10%, the banks can create, say a million dollars in new deposit accounts and then put 10% of those in the central bank. More accurately the rate of interbank spending is so high that by the time they have to settle with the central bank what gets parked there is from a mix of sources. They can park securities instead as reserve collateral, I belive. This is how it works and I have a number of links to prove it. Here is rich source of references https://www.debtdeflation.com/blogs/2009/01/31/therovingcavaliersofcredit/ This myth that fractional reserve banking operations work by creating loans based on existing reserves, which are spent at another bank to create new deposits to create new loans, turning 10k into a million, is just that : a myth. Banks can issue as much new money as they deem healthy.

Someone putting 10Eur in a bank and getting deposit money in return isn't increasing the money supply. The bank would not spend its reserves, it would invest them, but today all banks need do is issue loans.

Repo is just a swap with an agreed future buyback. I don't see an analogy with the above debt creation process.

Not the answer you're looking for? Browse other questions tagged monetary-policy banking shadow-banking or ask your own question.

2
How important are capital requirements for controlling broad money supply?
2
Is there a clear timeline of ECB/Eurosystem's changes to the defintion of M3 (with regard to repos)?
0
Creation of Money - Hypothetical Situation II

2
How does a bank create new money when it pays its own staff?
2
Is money mostly created (out of nothing) by banks making loans?
0
How does the Fed measure the shadow banking sector in the US?
0
Can a commercial bank lend money from transaction/checking account as it would from a deposit account?
1
Transparent Fractional-reserve banking as an alternative to the current system
0
Is the equity lending involved in naked short-selling structurally equivalent to fractional-reserve banking?
5
Why are the financial intermediation theory of banking or fractional reserve theory of banking still accepted despite evidence to the contrary?