From many resourses, $I$ refers to domestic investment. For example in this link: https://opentextbc.ca/principlesofeconomics/chapter/23-4-the-national-saving-and-investment-identity/

However, in Mankiw's book, it says that $I= I^d + I^f$, the summation of domestic investment + foreign investment, as shown in 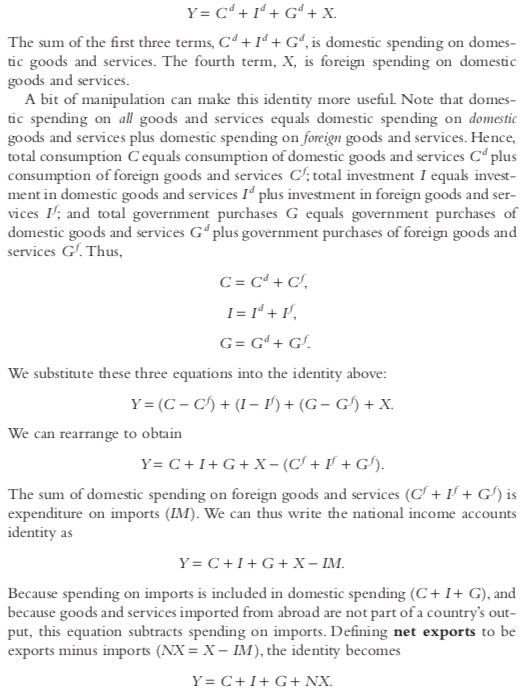 And actually in later pages of Mankiw's book, "I" is referred to domestic investment at many places also.

What does "I" accurately refer to?

$C^d$, $I^d$, and $G^d$ have been subjected to the same ``bit of manipulation'', which is to add and substract the foreign part such that we get the same equality (1).

I think it safe to say that calling $I$ domestic investment is here an "abuse of language"!

The most important is that identities (1) or (2) are consistent with the way we calculate GDP using total value added.

I is not the summation of I domestic and I foreign. Think about what is being calculated. Y is the total income or rather expenditure for ‘a country’. Foreign investment is income going to another country, not income to this country. IM represents imports of goods and services from overseas, it also represents a form of investment overseas in employment operations.

The reason why consumption, gov spending and investment are domestic only is because they together calculate the expenditure/ inflows to this country with export and import being the only external sources of inflow and outflow of cash.

Not the answer you're looking for? Browse other questions tagged macroeconomics gdp national-income or ask your own question.

14
Larry Summers on the causes of secular stagnation
12
What is the Gross Domestic Product (GDP)?
3
Calculating the Net Domestic Product
1
Domestic Demand, Private Consumption, Public Consumption, Gross Fixed Investment Relationship
3
What's the difference between gross fixed capital formation and gross private domestic investment?
0
Does GDP Income Approach hold?
0
What will be the additional investment?
2
Why does the answer not include increased negative unplanned stock investment?
0
Does GDP typically refer to Real GDP or Nominal GDP?