Why is the oil future price negative?

I don't understand why the price of oil futures went negative today. 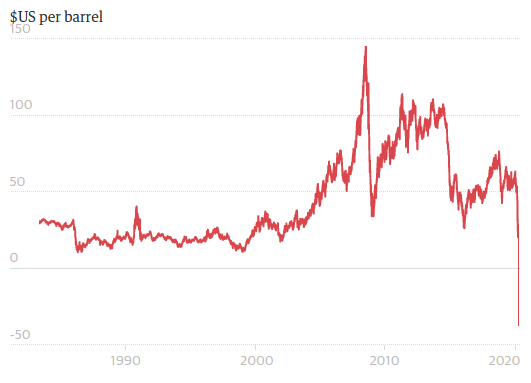 price commodities oil
Share
Improve this question
edited May 4 '20 at 9:39

I'm answering from my memory of Reddit comments like blitzkrieg9 and AdmiralAkbar1. Don't hesitate to edit this post to link to them, but I can't remember where exactly I saw them. And I haven't just copied and pasted – I've rewritten out typos.

Unprocessed crude oil is full of toxic and nasty stuff, and if not properly contained, many dangerous gasses like benzene or hydrogen sulfide will just evaporate out of it. You definitely don't want to be anywhere near an open swimming pool full of crude oil.

You can't really do anything with it at home, and if you dump it, you go to prison. You get nasty byproducts that you'll have trouble selling in the tiny quantities you produce, but which are illegal to dump. But hey, you might get a gallon or two of usable gas out of it!

Crucially, this is the price for crude oil which still has to be refined into usable products, and cannot easily be disposed of. The negative price reflects the costs associated with storing the stuff indefinitely.

And you can't turn off producing wells like a tap. It takes time to shut them down without ruining them, so that they can be turned on again. Look how long it took to get Kuwait up and running again after the first Gulf War, when the retreating Iraqis destroyed wells.

The leases for oil and gas in America have "shut-in clauses" where after being shut in for a certain period of time (usually one year or so, but they vary) the lease holder has to go back to the mineral owner, to re-lease. Again with gas, operations can go and turn on a gas well for a month, then turn it back off just to get enough production time to avoid the shut-in clauses. You can't do this with oil. Even old stripper wells need about $18-20 to pay to keeping them operating.

A futures contract is simply a contract to buy something in the future, like next month or next year. Some futures contracts "settle to cash". This means we determine the price when I bought the contract and the actual real-world price on expiration date, then one of us pays the other person the price difference.

But oil and most commodity contracts settle for the actual product! If you don't close out your soybean contract, your exchange calls you asking what you'd like to do with your soybeans that are waiting for you in Kansas City! Same with oil. Tankers are showing up in Houston with millions of gallons of oil and somebody needs to take delivery. Nobody can, because all the storage facilities are already full. So people are literally paying you over $30 a barrel for you to possess oil!

You're referring to a specific contract for specific delivery to an oil pipeline in Oklahoma on Apr 21 2020. That is the crux of the issue. The supply vs demand kerfuffle is very localized at a major crude oil pipeline junction in middle America. This is unprecedented. But it is a LOCALIZED phenomenon.

What's happening now is what happened in Trading Places when the real report comes out: people realized that they overpaid for their futures and are selling to try and recoup some of their losses. There's less demand for oil right now, there's less hope of more demand for oil in May, and there's little storage space left. Low demand + high supply = low prices. A few days ago, the settlement price for a barrel of oil for futures contracts with May settlement dates was locked at ~\$18 a barrel. People expect it to be way lower than \$18 next month. So they're trying to sell off their futures contracts. It's going negative because they're literally paying you to take it off their hands if you have room for it. Although they know it'll be a loss, they figure it's less of a loss than holding onto worthless oil that they can't store.

This isn't the "oil price" that's going negative; it's the price of WTI Oil Futures contracts for May. WTI Futures contracts mean taking physical delivery in Cushing, Oklahoma (the hub of the US pipeline network).

Many, many contracts was signed some time back, for the seller (at a future date, hence futures) to deliver X barrels of oil to Cushing and for the buyer to take it off their hands there (or it becomes toxic waste). These contracts can be bought and sold like stocks. Right now, storage is full, transport is hamstrung by the quarantine and no one wants that oil due to a collapse in demand, so the speculators who own those futures are paying people to take that liability off their hands, by selling these futures at a negative price.

Note that this is only for May 2020 (for now). WTI Futures contracts for June and July are currently trading for ~ 20/26 per barrel respectively, because the market expects the quarantines to be over by then and the demand to pick up.

Basically the future contract expires at a certain date and they have to take delivery. The futures owners were dumping because the price of storage if they had to take delivery would have been very high, or even impossible.

The people buying back the future contracts (at negative prices) were likely the very same people producing it. (OPEC+, Russia, US shale)

So you have a situation where oil producers are being paid briefly not to deliver on their futures.

News say it is because sellers cannot sell it. But, why don't they just hoard it until the coronavirus crisis is off?

They can't because their oil storage facilities have a limited capacity.

According to this German article from Spiegel Online, there is currently less demand for oil than there is production. Oil wells are pumping oil which they can not sell and it is overflowing their stores. They need to get rid of it.

Why don't they just stop pumping, then?

Alternatively, I would like to get paid for receiving a barrel of oil (I can keep it in my back garden) and then sell it in the future.

It might not be worth the cost of doing business for you.

I would expect that even in the current situation, running a crude oil storage facility is only profitable if you can benefit from economies of scale - if you are able to store a couple hundred to a couple thousand barrels of oil at a time. And if you are in a location where it actually makes economic sense to store oil (near facilities which produce or consume crude oil).

This negative price is caused by greedy countries.

The BIG question is, who (which country) should reduce production? The biggest producer is Saudi Arabia, and they indeed reduced production, and called upon other producers to do the same, in the OPEC meetings. They (SA) don't have that much pain, SA is filthy rich, and can afford to keep the oil underground for future production, when prices are up again.

But how about other countries? Most countries do fun things with their oil dollars, like stimulate their economies. When they reduce production, they get into an economic crisis. Also, they produce smaller amounts than SA, so they figure, yes, we agree that production should go down, but no, we keep producing the same for a little while longer to not get into a financial crisis too soon. Or, because meanwhile oil prices are already much lower because of lower demand due to Corona, they even increase production, to make up for those lower prices.

This is called Greed. You don't care about the common cause of keeping oil price up for the benefit of your OPEC friends. You don't care that oil is already a finite resource and you don't lower production to save some oil for your grandchildren. You don't care of the air getting much cleaner and getting a little bit less global warming. No, you keep pumping like crazy for just a few lousy dollars.

The rest is history. You can't go on forever pumping 20 million barrels more than demand. Storage, meaning above ground storage, is very finite, and got full. Nobody will buy your oil, even at zero price.

The obvious solution is to store surplus oil underground, where it sat at no cost for hundreds of million years.

Arguments that production could not be stopped due to pressure buildup or so are moot, as the oil prices are down for many weeks now, and there was plenty time to calmly reduce production.

You may argue that the negative price could have been prevented to reduce production just one day earlier, because indeed you cannot close the valve in five minutes. But that ignores the fact that the negative price is just a result of a downwards trend ignored for weeks. Any downward trend will eventually cross the zero. Producers should have reduced production at the first signs of lower world oil prices, weeks ago, and argued that oil is a precious resource that you can only produce and consume once in 300 million years, and should be produced only in times of high prices. Producing precious oil for (positive) low prices is just scandalous, to say the least.

Update with a technical non-political aspect:

Today in the news, 9 hours ago:

Before the coast of California, for over a week 35 fully loaded oil tankers are waiting to be unloaded. They carry about 20 million barrels of crude oil, corresponding to about 20 percent of worldwide dayly pre-corona oil demand.

Imagine the cost of storing oil this way. If you could empty those ships now, you could earn some serious money.

If this was about mineral water imported from Europe (Vitel, Spa), the ships could just dump to the sea. But this is oil...

Not the answer you're looking for? Browse other questions tagged price commodities oil or ask your own question.

0
Why didn't other oil pricing benchmarks such as Brent go negative?

7
What is the impact of fracking on oil prices?
4
Oil Price Chart Scale
4
Why is oil price increasing in May 2016
1
How to measure expected price growth rate for oil?
0
Oil price decreases due to supply decrease?
2
Why does a lack of pipelines cause Canadian crude oil to trade at a discount compared to US crude oil?
1
Crude oil price changing factors
0
Low oil price and impact
0
Why didn't other oil pricing benchmarks such as Brent go negative?
0
Effect on price of sudden oil supply drop